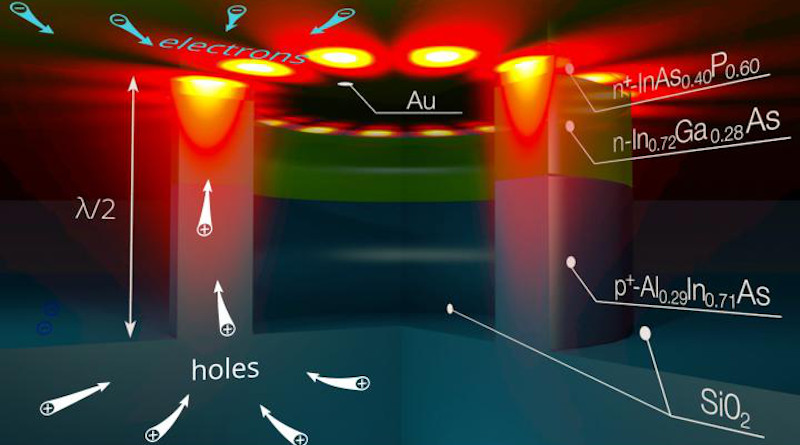 Researchers from the Moscow Institute of Physics and Technology and King’s College London cleared the obstacle that had prevented the creation of electrically driven nanolasers for integrated circuits. The approach, reported in a recent paper in Nanophotonics, enables coherent light source design on the scale not only hundreds of times smaller than the thickness of a human hair but even smaller than the wavelength of light emitted by the laser. This lays the foundation for ultrafast optical data transfer in the manycore microprocessors expected to emerge in the near future.

Fiber optics underlies the modern internet, but light could do much more for us. It could be put into action even inside the microprocessors of supercomputers, workstations, smartphones, and other devices. This requires using optical communication lines to interconnect the purely electronic components, such as processor cores. As a result, vast amounts of information could be transferred across the chip nearly instantaneously.

Getting rid of the limitation on data transmission will make it possible to directly improve microprocessor performance by stacking more processor cores, to the point of creating a 1,000-core processor that would be virtually 100 times faster than its 10-core counterpart, which is pursued by the semiconductor industry giants IBM, HP, Intel, Oracle, and others. This in turn will make it possible to design a true supercomputer on a single chip.

The challenge is to connect optics and electronics at the nanoscale. To achieve this, the optical components cannot be larger than hundreds of nanometers, which is about 100 times smaller than the width of a human hair. This size restriction also applies to on-chip lasers, which are necessary for converting information from electrical signals to optical pulses that carry the bits of the data.

However, light is a kind of electromagnetic radiation with a wavelength of hundreds of nanometers. And the quantum uncertainty principle says there is a certain minimum volume that light particles, or photons, can be localized in. It cannot be smaller than the cube of the wavelength. In crude terms, if one makes a laser too small, the photons will not fit into it. That said, there are ways around this restriction on the size of optical devices, which is known as the diffraction limit. The solution is to replace photons with surface plasmon-polaritons, or SPPs.

SPPs are collective oscillations of electrons that are confined to the surface of a metal and interact with the surrounding electromagnetic field. Only a few metals known as plasmonic metals are good to work with SPPs: gold, silver, copper, and aluminum. Just like photons, SPPs are electromagnetic waves, but at the same frequency they are much better localized — that is, they occupy less space. Using SPPs instead of photons makes it possible to “compress” light and thus overcome the diffraction limit.

The design of truly nanoscale plasmonic lasers is already possible with current technologies. However, these nanolasers are optically pumped, that is, they have to be illuminated with external bulky and high-power lasers. This may well be convenient for scientific experiments, but not outside the laboratory. An electronic chip intended for mass production and real-life applications has to incorporate hundreds of nanolasers and operate on an ordinary printed circuit board. A practical laser needs to be electrically pumped, or, in other words, powered by an ordinary battery or DC power supply. So far such lasers are only available as devices that operate at cryogenic temperatures, which is not suitable for most practical applications, since maintaining liquid nitrogen cooling is not typically possible.

The physicists from the Moscow Institute of Physics and Technology (MIPT) and King’s College London have proposed an alternative to the conventional way electrical pumping works. Usually the scheme of electrical pumping of nanolasers requires an ohmic contact made of titanium, chromium, or a similar metal. Moreover, that contact has to be a part of the resonator — the volume where the laser radiation is generated. The problem with that is titanium and chromium strongly absorb light, which harms resonator performance. Such lasers suffer from high pump current and are susceptible to overheating. This is why the need for cryogenic cooling emerges, along with all the inconveniences it entails.

The proposed new scheme for electrical pumping is based on a double heterostructure with a tunneling Schottky contact. It makes the ohmic contact with its strongly absorbing metal redundant. The pumping now happens across the interface between the plasmonic metal and semiconductor, along which SPPs propagate. “Our novel pumping approach makes it possible to bring the electrically driven laser to the nanoscale, while retaining its ability to operate at room temperature. At the same time, unlike other electrically pumped nanolasers, the radiation is effectively directed to a photonic or plasmonic waveguide, making the nanolaser fit for integrated circuits,” Dr. Dmitry Fedyanin from the Center for Photonics and 2D Materials at MIPT commented.

The plasmonic nanolaser proposed by the researchers is smaller — in each of its three dimensions — than the wavelength of the light it emits. Moreover, the volume occupied by SPPs in the nanolaser is 30 times smaller than the light wavelength cubed. According to the researchers, their room-temperature plasmonic nanolaser could be easily made even smaller, making its characteristics even more impressive, but that would come at the cost of the inability to effectively extract the radiation into a bus waveguide. Thus, while further miniaturization would render the device poorly applicable to on-chip integrated circuits, it would be still convenient for chemical and biological sensors and near-field optical spectroscopy or optogenetics.

Despite its nanoscale dimensions, the predicted output power of the nanolaser amounts to over 100 microwatts, which is comparable to much larger photonic lasers. Such a high output power allows each nanolaser to be used to transmit hundreds of gigabits per second, eliminating one of the most formidable obstacles to higher-performance microchips. And that includes all sorts of hi-end computing devices: supercomputer processors, graphic processors, and perhaps even some gadgets to be invented in the future.

By Diana Raileanu and Robert Coalson* Shortly before Moldova’s November 1 presidential election, a group of nongovernmental organizations announced plans to