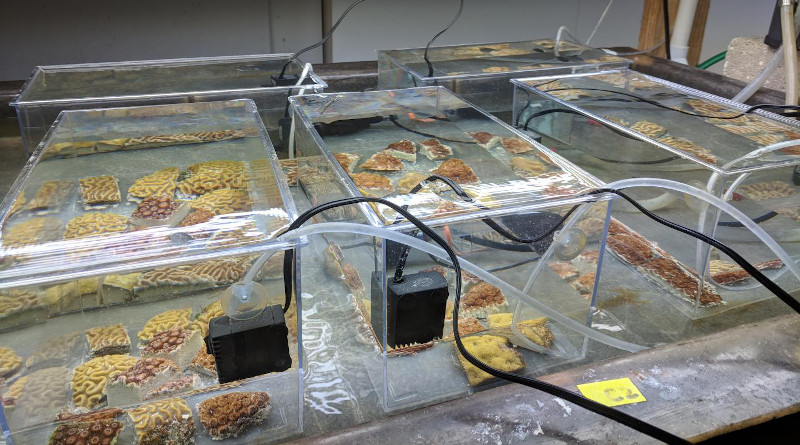 Part of an experimental setup (heat plus AU from 50m depth) in a wet lab at the Bermuda Institute of Ocean Sciences (BIOS). The cold, deep water is supplied once a day through the silicone tubing. It is allowed to mix with the ambient water in each tank before overflowing onto the concrete table and draining out. CREDIT: Yvonne Sawall

The risk of severe coral bleaching–a condition in which corals lose their symbiotic algae, called zooxanthellae–is five times more frequent today than it was forty years ago. Coral bleaching is a direct result of global warming, where rising temperatures cause marine heat waves, which place stress on the living coral animals, as well as the photosynthetic algae on which they depend for energy. This heat stress causes the algae to malfunction, at which point they are expelled by the corals, causing the organisms to lose their color and appear white (thus the term coral “bleaching”).

Due to the increasing pressure of global warming on highly valuable coral reef ecosystems, scientists are now seeking novel ways to decrease heat stress on corals. A new study led by Yvonne Sawall, assistant scientist at the Bermuda Institute of Ocean Sciences (BIOS), is showing potential for the use of artificial upwelling (AU)–or the application of cooler, deep water–as a way to mitigate the thermal stress on corals.

Upwelling is a natural oceanographic process in which winds push surfaces waters away from a region, such as a coastline, allowing the uplift of deep, cold waters to the surface. These waters are typically rich in nutrients and form the basis of productive marine ecosystems which, in turn, support many of the world’s most important commercial fisheries. AU is a geoengineering method that uses pumps to bring deep-ocean water to the surface. Originally designed to fertilize surface waters to increase fish stocks or carbon dioxide (CO2) sequestration, AU may also be used to cool surface waters during heat waves, if the depth and intensity of AU is chosen wisely.

“Ocean warming and the occurrence of heat waves will increase in frequency and intensity over the coming decades and we need to consider rather unconventional solutions to protect and sustain coral reefs,” Sawall said.

The results of the study showed that even short intrusions of cooler deep water (less than two hours per day) can mitigate thermal stress in corals. This was evident in higher levels of zooxanthellae performance in corals exposed to heat stress and AU compared to corals that were exposed to heat stress only, and this effect seemed stronger in the simulations with water from deeper depths.

“Our study shows the potential benefits of pulsed AU during heat waves. The next steps now are to find suitable AU settings to maximize the benefits, while minimizing potential harmful side effects of AU for corals and the ecosystem they support,” Sawall said.

Home » Can Pumping Up Cold Water From Deep Within Ocean Halt Coral Bleaching?