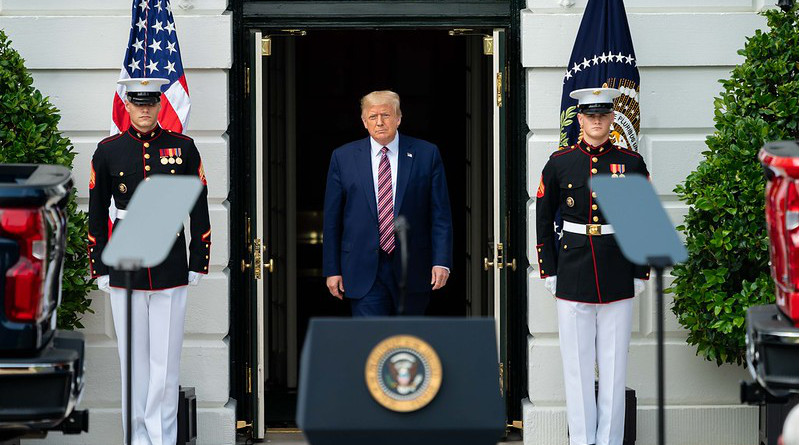 US President Donald Trump has unleashed a fresh offensive on Joe Biden, suggesting his presidential rival should be punished for “spying” and “treason,” and needs to be subjected to a cognitive ability exam.

Trump went on the warpath on Sunday, with Joe Biden the target of his rage. In a scathing tweet, he accused Biden of being “totally controlled” by the “radical left,” referring to the leaders of Portland, where Black Lives Matter and Antifa rioters have battered and burned the city’s Justice Center for more than 50 days.

Trump then resurrected a long-standing gripe with the Barack Obama administration, which was in power when the FBI launched a surveillance operation on his presidential campaign in 2016. Recently declassified documents revealed that this operation involved a number of White House officials, among them then-Vice President Joe Biden.

“So we catch Obama & Biden, not to even mention the rest of their crew, SPYING on my campaign, AND NOTHING HAPPENS?” Trump tweeted. “I hope not! If it were the other way around, 50 years for treason. NEVER FORGET!!!!”

Trump doesn’t seem likely to forget, as he’s often accused the Obama administration of “treasonous crimes” against his campaign. “Treason” is a word he’s thrown at the Democrats for a range of other deeds as well. The impeachment inquiry against him, Special Counsel Robert Mueller’s ‘Russiagate’ investigation, and the Democrats’ effort to block his long-promised border wall have all been described by Trump as “treason” or “treasonous.”

However, with November’s election less than four months away, it’s unsurprising that Biden would occupy prime real estate in the president’s mind. National polls, which Trump has dismissed as “suppression,” currently put Biden ahead of Trump by double figures, as the president reels from the coronavirus pandemic and the recent Black Lives Matter protests and riots.

With the election closing in, Trump has also focused on one of Biden’s obvious weaknesses: his apparent mental decline. Biden often struggles to finish sentences, forgets where he is, and confuses important figures.

In a Fox News interview on Sunday, Trump asked Biden to take a live cognitive ability test alongside him – the same test Trump took in 2018, which his doctor said he “aced.”

“I guarantee you that Joe Biden could not answer those questions,” Trump jibed. Before Sunday’s interview, the president said that Biden “doesn’t know where he is, or what he’s doing.”

One thought on “Trump Launches Full-On Attack On Biden”