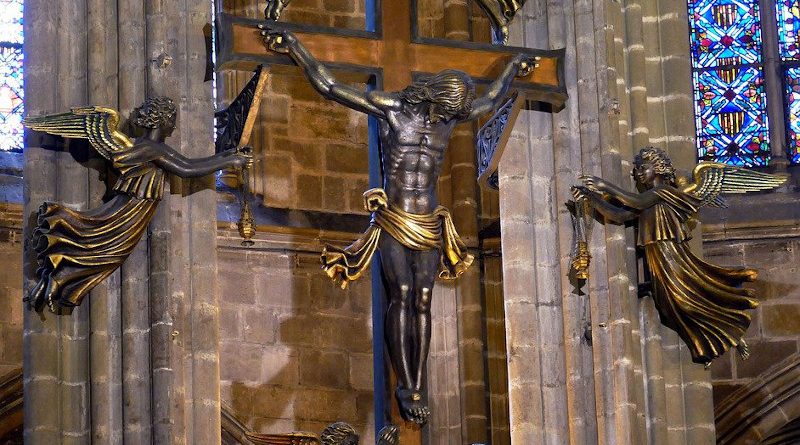 While there is a tendency to associate the Spanish martyrs of the 20th century solely with the civil war of 1936-39, there were decades of preparation leading to this, accompanied by desecrations of churches, according to a Spanish priest serving in Rome.

The religious persecution in Spain in the 20th century took “some preparation. It is not something that can be narrowed down, it cannot be limited simply to the first months of the Spanish Civil War,” Msgr. José Jaime Brosel Gavilà, rector of Santa Maria in Monserrato degli Spagnoli, the Spanish national church in Rome, told ACI Prensa, CNA’s Spanish language news partner.

Msgr. Brosel is a priest of the Archdiocese of Valencia and an expert on 20th century Spanish martyrs.

“We have martyrs from 1909, such as Brother Lycarión, a Marist religious who died in the context of the Tragic Week in Barcelona. There was destruction of churches in 1931, there were the canonized martyrs of 1934, and certainly the first months of the Civil War,” he said.

“The second half of the year 1936 is perhaps where there was a greater number of martyrs, but the persecution cannot be limited to the Civil War, but covers all those first decades of the 20th century, and also covers not only Spain, but all of Europe.”

During the Spanish Civil War, Republicans martyred thousands of clerics, religious, and laity; of these, 11 have been canonized, and 1,915 beatified.

While a great number of the martyrs lost their lives during the civil war, there were also other periods, such as the Tragic Week, an uprising of Republicans, socialists, and anarchists in Catalonia in July 1909; the proclamation of the Second Spanish Republic in 1931; and the Revolution of 1934, a movement of rebellious strikes.

These incidents were also accompanied by the destruction of religious buildings, desecrations, persecution, and the murder of priests, bishops, men and women religious, and lay people out of hatred of the faith.

In any case, “it wouldn’t be right to identify the martyrs with the Civil War. A war never produces martyrs, it produces victims. Historians like Msgr. Vicente Cárcel, or the Spanish bishops have strongly emphasized this,” the priest noted.

“They’re not martyrs of war, they’re martyrs of persecution, martyrs who died forgiving, and martyrs whose martyrdom was nothing more than the culmination of a life of faith.”

Many of them “could have been beatified for their virtues without any problem even if they hadn’t died a bloody death. But the motivation was hatred of faith, and that hatred of faith is shown by the lack of trials. There were no trials with legal guarantees. Generally, there weren’t any trials, and if there were, they were sham trials. Those who searched for and captured people generally didn’t know anything about the person other than ‘he’s a priest, he’s a religious, the person is a man or a woman of the Church.’ There was no other motivation.”

“We have to understand these martyrs in a context of religious persecution in many countries. There are martyrs of Nazism, there are martyrs of the communist regimes… We cannot simply identify them with a war or with an ideology,” Msgr. Brosel argued, and adding that “Saint John Paul II called the 20th century the great century of martyrs.”

He said the martyrdoms were cruel, “with revenge, with the desecration of corpses. The martyrs were not accused for any political, economic, or social reasons. There was something else to it. There were anti-religious rituals in the destruction of churches.”

For example, he said, “those who destroyed churches, who burned them, wore vestments in mock processions… There was an anti-religious ritual, there was no simple intention of destroying national patrimony, but a complete kind of symbolic language was used, making clear what was intended.”

Another element aspect of this anti-religious ritual is the way people were martyred.

“The persecutor attacked what was considered to be reprehensible, i.e. the mouth. Many martyrs had their tongues cut out because preaching comes through the mouth or because they refused to blaspheme. Or the genital area. Some of martyrs were told: ‘If you agree to consort with prostitutes, we’ll save you.’ And they end up cutting off their genitals.”

In short, “there was no accusation other than hatred of the faith. There were often- repeated false accusations: ‘They have weapons in the convent, there are illegal radio transmitters in the convent, the water has been poisoned, they’re hiding money ….’ In the end, everything was proven to be false. There was no other motivation than hatred of the faith.”

The Spanish Civil War remains controversial in the country. Francisco Franco, leader of the victorious Nationalist forces, was Spain’s head of state from the end of the war until his death in 1975.

In October 2019, Franco’s body was exhumed from the Basilica of the Holy Cross at the Valley of the Fallen, fulling a pledge of the government of Pedro Sanchez, secretary-general of the Spanish Socialist Worker’s Party.

Those who sympathize or identify with the Republican side tend to simply focus on the atrocities committed by the Nationalist side, and vice versa.

Msgr. Brosel acknowledged that there were also innocent victims, not martyrs per se, on the Republican side of the conflict and explained that in that sense “when you try to focus attention on those of one side (of the war) at that time, it’s justified by saying ‘perhaps those in the other side have already had enough tributes.’ I believe that what is being considered in some cases is just, i.e. the recovery of bodies, moving toward healing, an encounter. But we can’t always be throwing stones at each other.”

“For the most part, our Spanish martyrs were men and women who had dedicated themselves to teaching the poorest of the poor, giving a free education to the least, the children of workers, creating charitable institutions of charity, supporting the most disadvantaged.”

Msgr. Brosel stressed that “it is unfair to say that (the victims) were from one party or another. A common element among all of them is that they died forgiving. At this time it would be necessary to condemn all deaths because no death is justifiable, not to hide any, and even less, to hide the death of innocent people like the martyrs.”

“I believe that it will never be possible to establish the total figure, and I believe that it will be increasingly difficult because there are no longer many eyewitnesses who knew, not only of the physical death, but also the motivation of the persecutor, or how the person lived his faith: how those who died accepted it from faith. Today we hardly have any witnesses and the documents demonstrating martyrdom are few.”

Among the martyr’s testimonies that particularly impacted him, Msgr. Brosel cited the “witness of Teresa Ferragut, an older woman who had four daughters who were nuns. She asked to die last because in that way she could encourage her daughters, like the mother of the Maccabees, not to falter, to remain faithful until the end.”

The expert said he was also moved by the “mothers of young priests. They’re not martyrs, the priests are, but the mother encouraged them: ‘Stay faithful to the end, my son. Faithful to the end.’”

“It is a beautiful puzzle that the Spanish martyrs offer us. With many common elements, a great deal of them, and the main one is a witness of faith and an invitation to forgiveness and reconciliation. And not just the martyrs, the families of the martyrs. It’s rare to find a family who would later file a complaint.”

“What we found are families of martyrs who asked their own children to forgive, to be reconciled. I wouldn’t say to forget, I believe that forgetting isn’t good, because what is forgotten we’re condemned to repeat, but asking that the blood of those relatives who had been martyred serve to build a new country, a different country, and not sometimes a country that gives us the impression that it wants to build by throwing stones, by confrontation, accusations, but from justice, of course, but from forgiveness and looking forward,” he concluded.

A version of this story was first reported by ACI Prensa, CNA’s Spanish-language news partner. It has been translated and adapted by CNA.