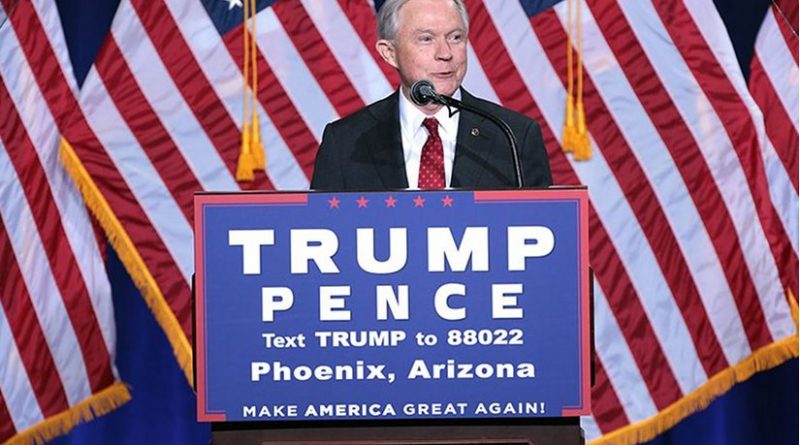 US President-elect Donald Trump’s selection of Alabama Senator Jeff Sessions as United States attorney general reinforces fears that Trump’s administration will threaten human rights protections, Human Rights Watch said. Sessions has said that he supports the use of torture and has expressed a range of views inimical to the rights of racial and ethnic minorities, women, immigrants, and lesbian, gay, bisexual, and transgender (LGBT) people.

Trump is also reported to be planning to nominate Representative Michael Pompeo as CIA director, despite the congressman’s history of xenophobic statements about Islam and his endorsement of the CIA’s defunct torture program.

“Senator Jeff Sessions has a disturbing record of racist statements, has said that he supports the use of torture, and has taken positions on immigration and the rights of LGBT people that pose a real threat to human rights,” said Maria McFarland Sanchez-Moreno, co-director of the US program at Human Rights Watch. “There is every reason to worry that under Sessions, the US Justice Department would simply not be in the business of protecting rights the next four years.”

As attorney general, Sessions would be the nation’s premier law enforcement official, responsible for enforcing federal law in a broad range of areas including immigration, criminal justice, LGBT equality, gender equality, and counterterrorism.

Sessions was rejected for a federal judgeship three decades ago due to multiple reports of racist comments he was said to have made, including warnings to a Black fellow prosecutor to watch how he spoke to white people. Sessions also reportedly described the National Association for the Advancement of Colored People (NAACP) as “un-American.”

In Congress, Sessions was one of a small minority of senators who voted against the Detainee Treatment Act of 2005, which barred the use of cruel, inhuman, or degrading treatment or punishment against any detainee in US custody and required the Defense Department to follow the US Army Field Manual on Intelligence Interrogations when conducting interrogations.

He also was among 21 Republicans who voted against an amendment to an annual defense bill sponsored by US Senators John McCain and Dianne Feinstein that extended these rules to the CIA and other US government agencies and became law in 2015. He has repeatedly downplayed the seriousness of torture and expressed support for leaving waterboarding, a form of torture, on the table as an option for future interrogations.

Sessions has a mixed record on criminal justice issues, Human Rights Watch said. He has supported important reforms like the Fair Sentencing Act, which reduced the crack and powder cocaine disparities in sentencing and introduced the Drug Sentencing Reform Act of 2001, which had similar goals. He also sponsored the Prison Rape Elimination Act, which addressed sexual assault in detention settings. But more recently, he opposed the bipartisan Sentencing Reform and Corrections Act, which would have, among other modest reforms, cut the mandatory minimum sentence for a third drug offense from life without parole to 25 years.

As attorney general, Sessions would be in charge of the corps of immigration trial and appeal judges who make decisions on deportation cases. The attorney general has the authority to hire and fire these judges and alter the way they interpret immigration law, including by changing the availability of asylum or other forms of relief.

As a senator, Sessions has fiercely opposed proposals to legalize unauthorized residents and has sponsored legislation to make it more difficult for unaccompanied migrant children to ask for protection in the US. He has also supported efforts to use local police to enforce immigration law, notably Alabama’s 2011 immigrant law, which denied unauthorized immigrants equal protection in the state and required police to determine the immigration status of anyone they arrested.

Sessions has taken troubling positions on the rights of women and LGBT people, including opposing the Violence Against Women Act, supporting a constitutional amendment against same-sex marriage, opposing LGBT inclusion in hate crimes legislation, and opposing the repeal of “Don’t Ask, Don’t Tell” in the military.

In reference to the Access Hollywood tape in which President-elect Trump was heard bragging about grabbing women by the “pussy,” Sessions told a reporter that: “I don’t characterize that as sexual assault. I think that’s a stretch.” When the reporter asked for clarification, “So if you grab a woman by the genitals, that’s not sexual assault?” Sessions responded, “I don’t know.”

This exchange seems to betray a dismissive attitude towards sexual assault that would be deeply troubling in the nation’s top law enforcement official. The attorney general has the responsibility to enforce Title IX of the Education Amendments of 1972, which prohibits sex discrimination in education programs that receive funding from the federal government. The Justice Department has applied the law to ensure that university campuses seriously address cases of sexual assault and rape.

Like Sessions, Pompeo also has a record of statements expressing support for the use of torture. This raises serious questions about his selection to run a powerful and secretive intelligence agency that only recently shuttered its own torture program – a development that Pompeo has publicly lamented.

In 2013, Pompeo is reported to have criticized Muslim clerics for not sufficiently speaking out against the Boston Marathon bombings, and suggested that they would be “complicit” in the attacks if they did not do so. In fact, many Muslim community leaders had been outspoken against the Boston attacks and others.

If confirmed, Pompeo will inherit the helm of the CIA at a time when the US is carrying out lethal strikes, often through drones, in a number of Muslim-majority countries including Afghanistan, Pakistan, Libya, Somalia, and Yemen.

“Sessions and Pompeo have both taken positions that raise serious doubts about their willingness to respect rights,” McFarland said. “The Senate should take these concerns seriously, investigate their records, and press them to repudiate abusive policies.”