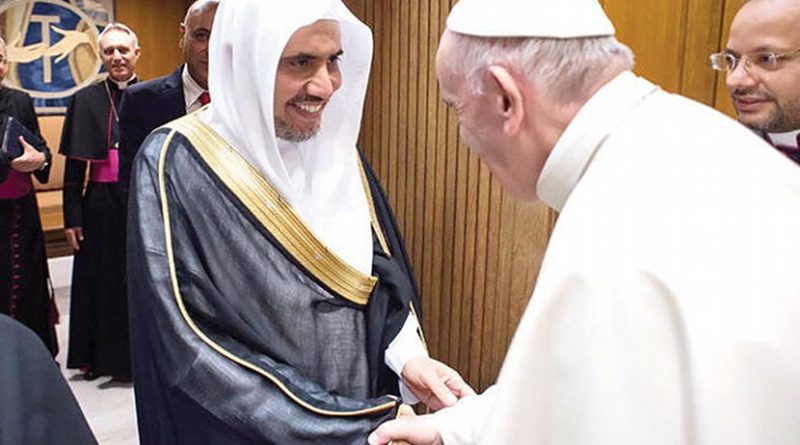 The Muslim world appreciates Pope Francis’s stance on false claims linking Islam to extremism and violence, Dr. Mohammed bin Abdulkarim Al-Issa, secretary-general of the Muslim World League (MWL), told the pope during a meeting at the Vatican on Wednesday.

The two men exchanged views on a number of topics of mutual concern, notably cooperation between the Vatican and the Islamic world on issues related to peace and coexistence.

Pope Francis has said in the past that violence is not directly related to Islam, and that all religions have some extremist followers.

After their meeting, the pope and Al-Issa exchanged gifts.

The MWL chief gave the pope a religious symbol representing Islamic civilization and its communication with other civilizations.

Pope Francis gave Al-Issa a memorial pen marking the 500th anniversary of St. Peter’s Basilica in 2006, and a medal commemorating his fifth year as head of the Roman Catholic church.

During his visit, the MWL chief will meet senior figures from the Vatican administration and leading Italian officials, and will attend a number of religious and cultural functions in Rome.