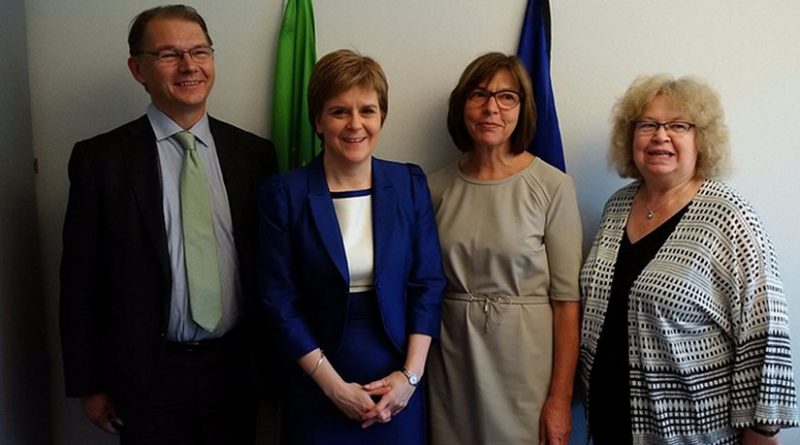 (EurActiv) — Scotland wants to stay in the European Union’s single market after the United Kingdom leaves the bloc and will push for more powers to protect its interests, head of government Nicola Sturgeon said Tuesday.

“We are determined to maintain Scotland’s current position in the European single market,” Sturgeon said in Scotland’s Place in Europe.

“There has to be a way to effectively square the circle (between the two results). Will this be easy? No… but I believe this is achievable,” she told a news conference.

“First and foremost, this is about us trying to convince the UK that these are proposals worthy of being considered.

“We believe our practical solutions are reasonable and in the best interests of Scotland, in a context that will be complex and unprecedented whatever the ultimate outcome.”

Sturgeon said the option of independence, which Scots rejected in 2014, had to be kept available and that she wanted to remain a full member of the EU.

“The option of independence must remain on the table,” Sturgeon said. “Brexit is a problem not of Scotland’s making.”

Scotland, she said, needed a fundamental review of its devolution settlement and that powers over immigration were vital to protect Scotland’s interests.

Scotland wants control of its own migration policy to shore up its ageing population and its more sparsely populated rural territory north of the English border.

But Scotland’s wish list is a difficult one to satisfy. While allowing free migration may be a priority for Scotland, curbing it has been set as a priority by UK Prime Minister Theresa May.

But he added: “Our position is there shouldn’t be a second (independence) referendum. There was a referendum, it was only two years ago, the result was very decisive (and) both parties agreed to abide by the result.”