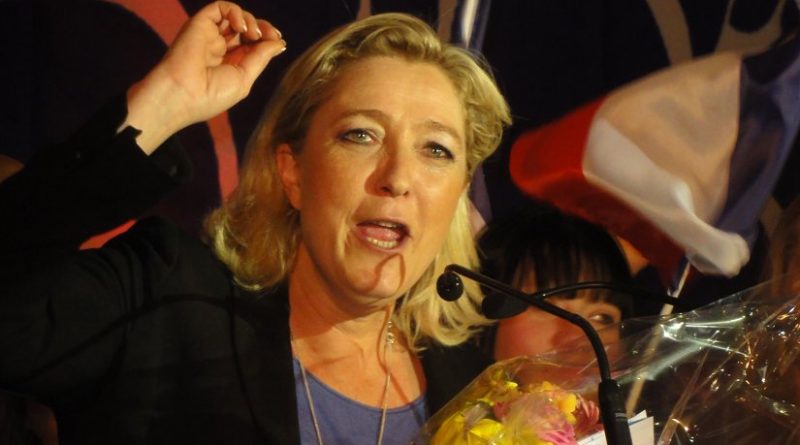 “The Brussels wall will have come down just like the Berlin wall came down. The EU, this oppressive model, will have disappeared. But the Europe of free nations will have been born… The EU should not last more than two minutes longer.” –Marine Le Pen

Marine Le Pen, leader of France’s far right National Front, seems poised to become the next President of France in 2018. Political pundits are predicting her victory following Donald Trump’s victory in the US. They aver that Trump’s populism has paved the way for a veritable political revolution in Europe which portends to reshape the existing world order.

How so? Well, for one thing, Le Pen wants the EU to withdraw from NATO, alleging that it would end American dominance in Europe. She repeats Trump’s assertion that NATO is now obsolete, and has in fact declared publicly that Trump’s victory makes such a feat quite possible now. To her way of thinking, NATO is a “tool for making sure countries that are part of it comply with the will of the United States.” She finds this unbearable. What would she substitute it with? She has some interesting proposals in this regard. She has called for “cooperation agreements” with Russia with close cooperation between European capitals and Moscow. In other words, Washington gets substituted with Moscow. She claims that there is “absolutely no reason we should turn systematically to the United States.”

This may sound a bit incoherent. She sees Trump’s victory as an additional stone in the building of a new world order but at the same time wants the EU to take its distance from the US. How does Le Pen square this circle? Thus: “Obviously we have to compare this victory [Trump’s] with the rejection of the European constitution by the French people, of course, with the Brexit vote, but also with the emergence of movements devoted to the nation—patriotic movements in Europe. All these elections are essentially referendums against the unfettered globalization that has been imposed upon us, that has been imposed upon people, and today has been clearly shown to have its limits.” That is to say, she sees Trump’s victory as a “victory of the people against the elite.” This of course is populism at its best, or perhaps its worst.

What is most intriguing about the above glaring statements is that they seem to reveal a mind-set quite similar to that displayed by Trump and Putin. All three seems to have quite a few affinities and seem to like each other. The major affinity seems to be this: they see the political struggles currently going on as struggles of civilizations against each other. Le Pen is on record as saying that next year’s presidential election in France would “establish some real choices of civilization.” She made such a statement in the context of a lashing out against the EU and its immigrant policies based on open borders. She added: “Do we want a multicultural society, following the model of the English-speaking world, where fundamentalist Islam is progressing…or do we want an independent nation, with people able to control their own destiny, or do we accept to be a region, managed by the technocrats of the European Union?”

She has gone as far as comparing the European Union to the Soviet Union: “I don’t see why we should recreate, virtually, this wall between European countries and Russia, unless to obey the orders of the United States, which up until now, have found an interest in this.” She has moreover blamed the EU and the US for destabilizing Europe’s relations with Russia, and has claimed that there is not “a hair’s breath” between her party and the UKIP regarding immigration and the European Union. Keep well in mind that Russia is currently footing the bill for her campaign expenses.

What can one conclude from the above analysis? It could prove useful in answering this crucial question: is this the beginning of the end of the world order established after World War II with its culmination the formation of the European Union and the NATO Alliance? To put it another way: is this the beginning of the breakdown of European stability? Let’s attempt an answer beginning with some historical background in a rather personal mode.

Back in the 50s, when I was a teen-ager, still living in Italy, when the EU institutions were still fragile, I remember writing an essay launched by the lyceum I was attending at the time, where I opined that I was rather skeptcal that the Western Alliance and the European Union would ever take off. In the 70s I was living and studying in the US (where my father was born) and lived through the Vietnam War and read the news about the Red Brigades, and began having doubts again about the survival of the West. I was then in college and was reading books like “The Decline of the West” by Oswald Spengler. That might have influenced me. But in all my adult life I am hard pressed to remember a dramatic moment such as the one we are now witnessing. All we need now is for good men to do nothing and the decline and possible destruction of the West is pretty much assured.

I hope I am wrong, but, following Trump’s inauguration on January 20, 2017, with a President, so called, totally uninterested in “shared values” with our allies (“not worth American lives” as he puts it), seeming to prefer the company of dictators such as Putin with whom he can make deals, to that of democratic allies, deeming the geo-political world as a huge transactional stage to be exploited on which to negotiate deals, incapable of conceiving the greater good, it would appear that we are two or three bad elections away from the end of NATO, the end of the European Union, and possibly the end of the liberal world order. The almost inevitable consequence will be the return of nefarious ultra-nationalism and fascism in Europe and the loss of democracy in America. Putin and his Trojan horses all over Europe are waiting in the wing. Their strategy is simple: divide and conquer.

To repeat the urgent question: are the lights going out; is it the end of the West as we presently know it?

What I call “the Caligua Presidency” constituted by political entertainment and double talk, has begun, people unfortunately end up getting the government they deserve and the monsters they have created. The omens are bad, but let’s not forget Le Pen. She is now the front runner in next year’s French presidential elections and she also finds alliances burdensome. Some of her campaign commitments are that she will withdraw from both NATO and the EU, will nationalize French companies, will restrict foreign investors, will promote a special relationship with Russia, the same Russia whose banks are funding her election campaign.

The question persists: is Le Pen at least partially right in considering what is going on a civilizational breakdown? More specifically: once France is out of the EU too (after Brexit), possibly followed by other copycats, can Europe’s economic single market survive in any shape or form? Will NATO and the Atlantic Alliance crumble? Trump of course will not be sorry for that, as his misguidedly appealing rhetoric to his misguided followers has made clear; indeed, the short term cost of alliances is easier to see and assess than the longer-term benefits. Let’s not forget that his span of attention is that of the time needed to write a tweet.

There is little doubt that shared economic space, nuclear deterrence via the NATO alliance, and standing armies, while being costly short term, produced more than half a century of political stability and prosperity in Europe and North America. We all take those benefits for granted now, until they are gone for good.

Those who have ears to hear, let them hear.

About the author:
*Emanuel L. Paparella has earned a Ph.D. in Italian Humanism, with a dissertation on the philosopher of history Giambattista Vico, from Yale University. He is a scholar interested in current relevant philosophical, political and cultural issues; the author of numerous essays and books on the EU cultural identity among which A New Europe in search of its Soul, and Europa: An Idea and a Journey. Presently he teaches philosophy and humanities at Barry University, Miami, Florida. He is a prolific writer and has written hundreds of essays for both traditional academic and on-line magazines among which Metanexus and Ovi. One of his current works in progress is a book dealing with the issue of cultural identity within the phenomenon of “the neo-immigrant” exhibited by an international global economy strong on positivism and utilitarianism and weak on humanism and ideals.