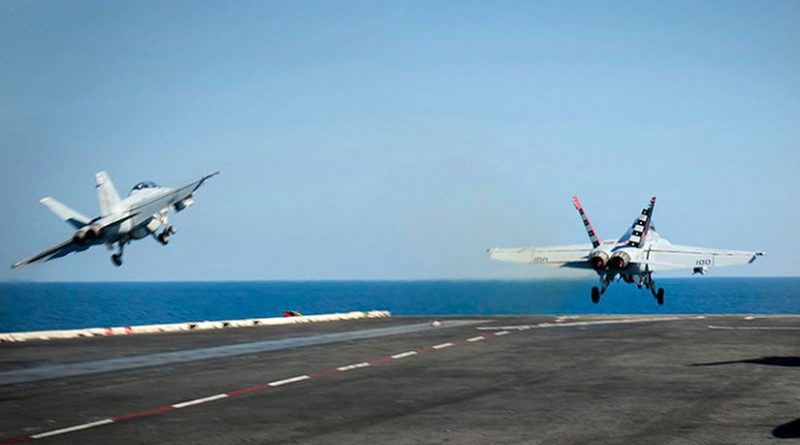 The Super Bowl champions gathered to observe flight operations on the flight deck. Following air operations, the Packers held an autograph signing in the ship’s hangar bay. With Sailors lined up in two rows, the Packers made their entrance between them with high-fives on the way to the stage. After a brief introduction, the players each tossed one signed football to the hundreds crowded around the stage. As the Sailors lined up at a table for autographs, a photo show highlighting the Packer’s season played on a screen.

As Bush signed a #24 Packers jersey, he expressed his appreciation to visit the deployed Sailors.

“To give the Sailors on this ship a smile and positive attitude, and a break from the hard grind warms my heart. To come here and experience what you do is an honor. Not many can do it, and not many choose to do it,” Bush said. “I appreciate any time we can bring some happiness and joy, to help you forget the hard times of the work and sacrifice.”

Bush observed a parallel between the hard work required of an NFL player and a Sailor.

“No matter what job you do, if you’re the lowest man on the totem pole, work hard and stay focused. When you get the opportunity, it comes at the oddest time and you’ve got to be ready,” he said. “My dad was in military, and growing up I’ve seen it work firsthand. I’ve seen others do it. It’s a blessing when you get that opportunity.”

“I have a couple of friends who were in the military, and when they came back, I wanted to see what was going on,” said Martin, signing a small Packers football. “I had to see it to believe it. We were told we could come over, and I was in. I appreciate seeing what you guys are doing out here.”

“We’re more in a position to thank you,” added Colledge, signing a Vinson T-shirt. “It’s a rare opportunity to come to a ship like this. We still think of you, so we wanted to come out. It’s a rare thing to sacrifice like you do, and you’re a rare group of people.”

After the show’s conclusion, the players observed nighttime flights from Vinson’s “Vulture’s Row”, and an equipment demonstration from embarked Explosive Ordnance Disposal personnel. The Packers held one more autograph signing at 8 p.m. for Sailors unable to make it to the earlier show to close out the first day.
Aviation Ordnanceman Airman Benjamin Loos, a Lincoln, Neb. native assigned to Weapons Department, was visibly excited to meet the team he had grown up watching.

“I grew up as Packers fan, and winning the Super Bowl meant a lot to me,” Loos said enthusiastically. “Them being here is a dream come true.”

“I’m from Wisconsin and a big fan. During the Super Bowl, I was on a beach detachment to Bahrain for a week, living in a tent. I woke up at 3 a.m. to watch the game,” said Koran. “Knowing they were going to be here when I got back to the ship was pretty cool. When I was a kid, I went to Lambeau Field and met a couple of the Packers, but this is the first time meeting a championship team. Having them come to the ship while we’re conducting combat operations is an amazing experience.”