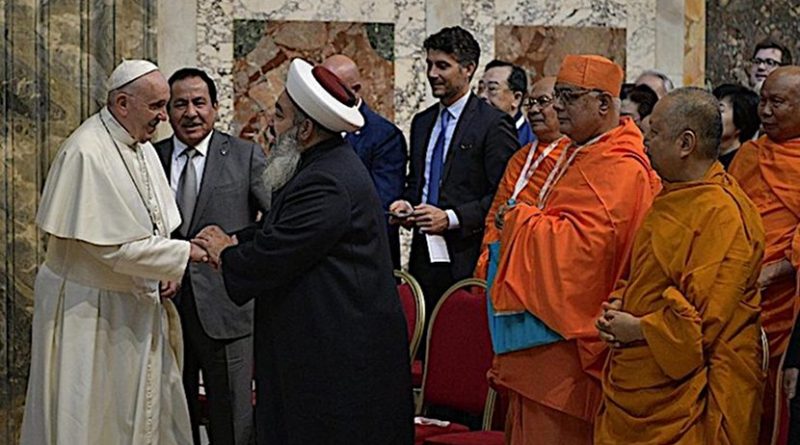 The proliferation of political crises and armed conflicts in every corner of the world does not exclude religious groups, which unfortunately also contribute to animosities, intolerance and hatred. The Middle East has been on the hit-list of violet extremist groups for decades. One telling example is Syria where clashes have on occasion taken religious or denominational overtones, fracturing Syrian society for decades to come. They have given rise to sectarian divisions along ethnic and religious lines in a country where inter-religious harmony once prevailed. We observe a similar situation in Iraq. In Myanmar, government security forces unleased a brutal campaign of ethnic cleansing and hatred against the Muslim Rohingya population. The military crackdown on the Rohingya community has significantly aggravated inter-communal violence in the country. And in the Central African Republic, armed militant groups sloganizing misrepresentations of Islam and Christianity, commit abuses and human rights violations on each other on a daily basis.

The conclusion that can be drawn is that the proliferation of political crises and armed conflicts indiscriminately target communities and societies regardless of religious beliefs or denominations. Violent extremism cannot be ascribed to one religion or region of the world. The recent appalling violent extremist attacks in Christchurch, Oslo and Colombo illustrate that violent extremism targets societies and communities blindly and where we least expect it to happen.

In a time where racism, racial discrimination intolerance and the fear of the other is on the rise, defusing inter-religious conflicts and enhancing understanding for religious diversity is needed more than ever.

In this spirit, inter-faith dialogue and cooperation remains an essential vehicle for religious believers to know, understand, and respect one another. Interreligious and religious-secular dialogues have the power to promote lasting change through a dialogue that fosters mutual coexistence, tolerance and empathy. This entails sharing a relationship of respect and mutual confidence as well as to identifying commonalities among religions, creeds and value systems in promoting multidimensional equalities, accepting diversity between human beings and promoting empathy. As His Holiness Pope Francis reminded us in Sarajevo in 2015 during his visit to Bosnia-Herzegovina:

“We need to communicate with each other, to discover the gifts of each person, to promote that which unites us, and to regard our differences as an opportunity to grow in mutual respect.”

This is a telling reminder that interreligious dialogues can serve as a vector to help break down the walls of ignorance that characterize many societies around the world. There is a need to build alliances between all religions and faiths to address the surge of racial discrimination, intolerance and prejudice. The visit of Pope Francis to the United Arab Emirates in February this year, for instance, and the historical signing of the joint document on “Human Fraternity for World Peace and Living Together” between the Pope and the Grand Imam of Al Azhar Sheikh Ahmed el-Tayeb are eloquent examples of endeavours made by religious leaders to promulgate a vision of unity in diversity.

It is likewise one of the greatest paradoxes of the contemporary world that major world faiths and creeds are being perverted by violent extremist groups to justify hatred and exclusion. All major world religions advocate peace and justice. The religious teachings of many traditions recognise that prevention of conflict in society by acceptance of the other is rooted in the dignity endowed to the human being. It is through unity — not division — that humanity can promote a world living in peace and harmony. All religions can play an important role.

Let me cite some examples.

Islam, for instance, puts strong emphasis on equality, proclaiming that all human beings are borne free and equal. During the era of Prophet Muhammed (PBUH), he said to his followers:

In Judaism, equality before the law plays a strong role in the enhancement of human dignity, human conduct and responsibility towards one another. Sanhedrin 4:5 teaches us that “(…) none should say, (my) Father is greater than yours,” for we are all descendants of the same ancestor.

In Christianity, we are taught in Galatians 3:28 that equality must guide our actions. “There is neither Jew nor Gentile, neither slave nor free, nor is there male and female, for you are all one in Christ Jesus.”

The right to equality is also emphasised in Hinduism. The Vedas – the sacred scriptures of Hinduism – observe: “No one is superior or inferior. All are brothers and all should strive for the interest of all and progress collectively.” So too in Budhism, as indeed Buddha taught a social message of love, equality and fraternity which underpin equal citizenship rights.

In Confucianism, the notion of “datong” or ‘Great Community’ symbolizes a world in peace and unity in which all people live in harmony with each other, collective and individual human rights being affirmed and closely interwoven.

These examples illustrate that religions and faiths themselves are not the source of hatred and intolerance, but only their distorted instrumentalization for vested interests by violent extremist groups. One must therefore harness the collective energy of all religions and faiths in the pursuit of peaceful and inclusive societies as stipulated in Sustainable Development Goal 16 of the 2030 Agenda for Sustainable Development. There is no reason for religious communities to fear one another as our commonalities clearly exceed our differences.

A New Archaeology For The Anthropocene Era