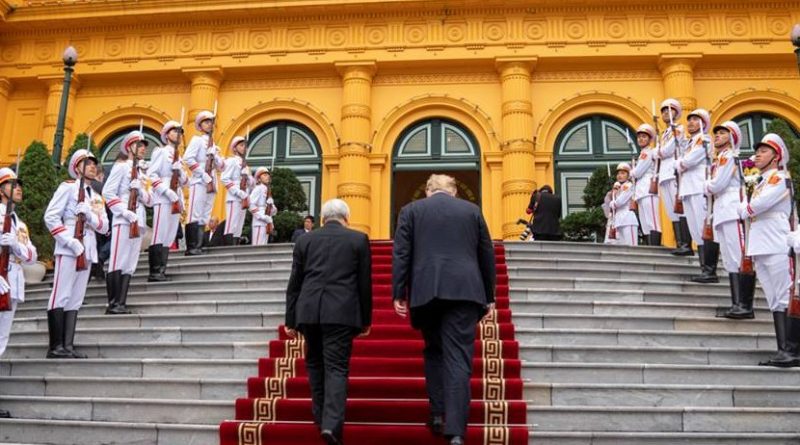 President Donald J. Trump walks up the stairs passing an Honors Cordon with Nguyen Phu Trong, General Secretary of the Communist Party and President of the Socialist Republic of Vietnam, on President Trump’s arrival to the Presidential Palace Wednesday, Feb. 27, 2019, in Hanoi. (Official White House Photo by Shealah Craighead)

Since the end of the Cold War, countries in Southeast Asia have largely come to view the American presence as a source of peace and stability, upholding international rules and norms, and supporting liberal international trade — principles which have allowed the region to prosper. Yet, in the span of four years, President Donald Trump’s scattershot approach to foreign policy has managed to not only weaken American influence in Southeast Asia, but also damage regional confidence in its leadership.

A recent survey conducted by the ISEAS-Yusof Ishak Institute across the ten Southeast Asian countries found that just 34.9% of respondents had some or full confidence in the US as a strategic partner; and just 24.3% believed that the US would “provide leadership to maintain the rules-based order and uphold international law.” With less than two months to go before the US heads to the presidential polls, it is pertinent to look back on Trump’s track record in Southeast Asia and ask: how did things come to this?

Since Trump assumed office in January 2017, the US has turned increasingly towards protectionism, directly impacting many Southeast Asian economies. The decision to withdraw from the Trans-Pacific Partnership (TPP) took the US out of what would have been the largest trade deal in the world, and it abandoned all the painstaking progress made with the agreement’s eleven regional partners. Singapore’s Prime Minister Lee Hsian Loong, in a rare moment of direct criticism of the US, rhetorically asked, “How can anyone believe in you anymore?” Trump has also threatened trade action against several regional countries, simply for having large trade surpluses with the US. His liberal use of tariffs to get his way caught many regional exporters in the crossfire and engendered neither trust nor goodwill in the administration. Moreover, his actions set a dangerous precedent for the violation of global trade rules and the distortion of international trade — potentially disastrous for trade-dependent Southeast Asia.

Trump’s disdain for multilateral groupings has also damaged America’s credibility as a global leader. Instead of leading global institutions, Trump has actively worked to undermine them — withdrawing from the Paris Agreement, defunding and disengaging from the United Nations, and refusing to appoint members to the World Trade Organisation (WTO) appellate body. And amidst the ongoing Covid-19 pandemic, the Trump administration has failed to coordinate a global response, and instead focused on pointing fingers at China, pressuring allies for aid, and withdrawing support to the World Health Organisation.

For countries in Southeast Asia, such multilateral institutions are seen as the cornerstones of a rules-based international order and necessary for preventing external disruptions that might jeopardise the region’s economic prosperity. By deliberately weakening these institutions, Trump has not just endangered the region’s long-term stability, but also further undermined confidence in US leadership.

Officially, the Trump administration’s ‘Free and Open Indo-Pacific’ (FOIP) strategy has made engagement with Southeast Asian countries a key policy focus. In reality, however, the president has exhibited little genuine interest or regard for the region. Unlike his predecessor, Barack Obama, who regularly attended high-level ASEAN summits, Trump’s term has been marked by chronic absenteeism from such events. Trump even managed to insult the grouping when he sent a relatively low-level delegation to last year’s US-ASEAN Summit, leading many ASEAN leaders to boycott the meeting in response. Although statements from the Trump administration continue to espouse the supposed importance of the US-ASEAN relationship, its behaviour has raised questions over America’s reliability and commitment to the region.

Most disturbing to regional observers has been Trump’s confrontational approach towards China. Trump’s administration has declared China a “strategic competitor” in its National Defence Strategy and has pursued overtly aggressive policies to bring bilateral relations to their lowest point in decades. This has encompassed actions such as launching the trade war, stepping up Freedom of Navigation Operations (FONOPs) in the South China Sea, and banning Chinese apps and tech companies.

Although Southeast Asian countries have been facing pressure from an increasingly assertive Beijing, they have no wish to see a standoff between the two superpowers, as that would harm the region’s stability and be detrimental to everyone’s interests. Moreover, an intensifying US-China relationship may force regional countries into picking sides — an unenviable position, given the importance of both superpowers to the region. That is why regional states have been generally muted in their response to provocative US actions like the use of FONOPs as well as assertive Chinese actions in Southeast Asia.

From Southeast Asia’s perspective, the best way to manage China’s rise is to enmesh it within an ASEAN-led regional architecture. Mechanisms like the East Asia Summit and ASEAN Regional Forum allow China to engage constructively with other regional powers, moderating its assertive behaviour and diluting its influence, while retaining a central role for ASEAN. A robust US presence within such multilateral arrangements would be a strong show of support for ASEAN which is necessary to balance China’s political weight. Trump’s indifference to these events indicates either ignorance of ASEAN’s approach or utter disregard for it.

Yet, these examples alone do not paint the full story of Trump’s record in Southeast Asia.

Despite its many missteps, the current administration has made efforts to engage with allies and strategic partners in the region. The Asia Reassurance Initiative Act (ARIA), for instance, dedicates some $1.5 billion every year to enhancing political, diplomatic, and economic engagement with regional states. The law specifically highlights the need to elevate the US-ASEAN relationship to that of a “strategic partnership” and to strengthen economic and security partnerships with Indonesia, Malaysia, Singapore and Vietnam. Besides encouraging continued US participation in multilateral groupings like the Asia-Pacific Economic Cooperation, the East Asia Summit, and the Group of 20, ARIA also emphasises the importance of trade relations with ASEAN, calling for the establishment of a “comprehensive economic engagement framework.” It also reaffirms US commitment to the Lower Mekong Initiative, providing aid and development assistance to Cambodia, Laos, Myanmar, Thailand, and Vietnam.

In addition, the Trump administration has recognised the huge demand for development funding in the region. In 2018, a $113 million “down payment” was announced to support various energy and infrastructure initiatives in Asia. The Better Utilisation of Investments Leading to Development (BUILD) Act was also signed to support private sector investment for infrastructure projects in developing countries and help host countries to identify risks associated with foreign loans.

Unlike China’s Belt and Road Initiative (BRI), the US approach encourages the use of private investments to fund projects, which means a greater focus on sustainability and profitability. Although this means less investment dollars, it reduces the likelihood that host countries will be burdened with unsustainable debt — a problem associated with many BRI projects.

The US has also provided assistance in other areas. The US-ASEAN Smart Cities Partnership aims to support the digital transformation of Southeast Asia’s urban centres, while the Indo-Pacific Transparency Initiative assists regional countries in attracting private investment, curbing corruption, and practicing good governance. Other initiatives like the US-Support for Economic Growth in Asia (US-SEGA) program will build capacity in APEC economies “to adopt high-standard, comprehensive trade and investment policies.”

Defence engagement with the region has largely continued. To strengthen Southeast Asian countries’ capacity to respond to seaborne threats, the US provides training and equipment through programmes like the Southeast Asia Maritime Security Initiative (SAMSI). Annual joint exercises with security partners like Singapore, Thailand and the Philippines have also continued. Last year, the inaugural ASEAN-US Maritime Exercise (AUMX) was carried out, involving navies from the US as well as all ten Southeast Asian countries for the first time.

These approaches demonstrate Washington’s focus on maintaining and continually strengthening US economic and security relationships with Southeast Asia. In this respect, the Trump administration is very much in line with longstanding US policy.

Yet, as the earlier survey indicates, there is generally little confidence among regional members in US leadership or even as a strategic partner. The reason for this incongruence between perception and reality has much to do with Trump himself. While the administration has put forward some comprehensive and well thought out policies to further America’s interests and image in the region, these are often drowned out by Trump’s latest headline-grabbing antics or utterances. Regional perceptions of the US are therefore shaped by perceptions of Trump — that of an unreliable leader and partner.

The problem for the US is that regional leaders derive much of their policymaking from perceptions. Negative perceptions could result in policy choices that are inimical to US interests and an erosion of Washington’s influence over time. However, the situation has not yet reached the point of no return for the US. The same survey found that if forced to choose between China the US, most respondents still preferred ASEAN to align with the latter (though just barely at 53.6%). Moreover, 60.3% of respondents indicated that their confidence in the US would increase if there was a change in US leadership — highlighting Trump, rather than the US, as the problem.

Come what may this November, the new administration will face an uphill task of restoring trust and confidence in the US. The existing policy frameworks will provide a solid foundation to advance this process. But beyond that, the actions and behaviour of the American president will be an important determinant of whether the US can successfully rehabilitate its image and regain its leadership role in Southeast Asia.

By Drake Long Secretary of State Mike Pompeo declared Friday that the U.S. and Vietnam were “elevating” their security partnership