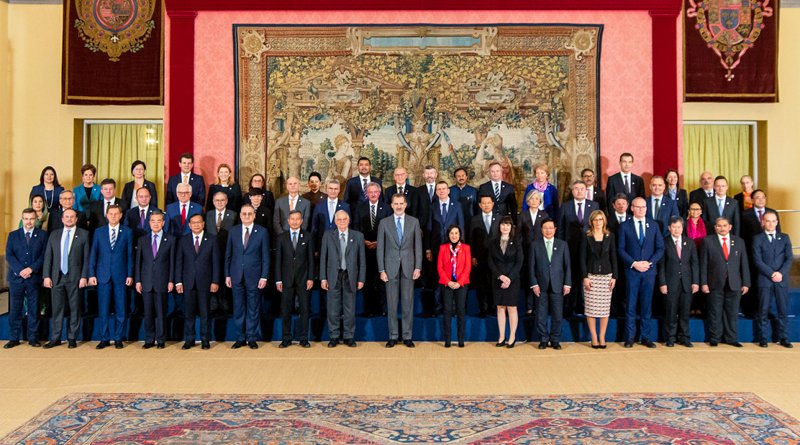 The ASEM foreign ministers meeting in Madrid was a useful opportunity to cement European and Asian support for multilateralism; and for Josep Borrell to meet his Asian interlocutors. The ministerial paved the way for the ASEM summit on 16-17 November 2020 in Cambodia.

The chair’s statement (see below) provided strong support for WTO reform, climate change, SDGs (including gender equality and women empowerment), ocean governance and marine litter. There was also a string commitment to work together on cyber and maritime security. The language on regional security was also quite positive including on hot spots such as the DPRK, Iran, Afghanistan and Ukraine.

Ministers engaged in a lively debate during their retreat session touching on the above and other sensitive issues such as Xinjiang and Hong Kong, Kashmir, Syria and the Donbas.

The new High Representative, Josep Borrell, used the opportunity of the ASEM foreign ministers meeting in Madrid this week to hold bilateral talks with a number of Asian colleagues. He judged the ASEM to have been a success and hoped that in future there could be more focus on fewer subjects with the possibility of joint actions.

Opening the meeting Borrell said that in a world of accelerating change it is clear that our cooperation matters now more than ever. ‘Simply put, Asia and Europe need each other much more than ever. The two continents, together represent 55% of global trade, 60% of the global population, 60% of global GDP, 75% of global tourism. We need to use this collective weight and power and put it at the service of promoting rules-based solutions to key challenges we face, from climate change to security issues, the rules-based trading system, sustainable connectivity and gender equality, just to name a few of them.

With a clear reference to Trump, Borrell said that recent developments on the international stage have increased the value of ASEM. When the rules-based system is being challenged, we have a massive mutual interest in sending a clear message that we all stand for rules-based multilateralism, for free and fair trade and for the institutions that have served us so well. Borrell also plugged climate change and ‘sustainable connectivity’ as other priorities for ASEM

China: Borrell met State Councillor and Minister of Foreign Affairs Wang Yi, who also paid a visit to Brussels to meet Charles Michel. Borrell emphasised the need to build on the EU-China strategic partnership and noted that there would be two summits in 2020: the annual summit in Beijing and a special summit in Leipzig during the German presidency. The EU and China were two of the biggest actors in global trade with one billion euros per day on average. There was close cooperation on Iran and climate change. Borrell said that he had also raised the sensitive issues of Hong Kong and Xinjiang, and insisted that human rights would always be on the agenda.

Japan: Borrell met the Japanese Minister of Foreign Affairs, Toshimitsu Motegi, to discuss the implementation of the EU-Japan Strategic Partnership Agreement focusing notably on the concrete initiatives taken by the EU and Japan on connectivity. There was a strong focus on the DPRK, maritime security, peacekeeping and crisis management. The next EU-Japan summit will be in Japan during the first half of 2010.

Singapore: Borrell thanked Foreign Minister Vivian Balakrishnan of Singapore for helping to strengthen ties between ASEAN and the EU (Singapore has been the ASEAN coordinator for relations with the EU – now passing to Vietnam). The two also discussed the strong bilateral ties between Singapore and the EU on trade, climate change and digital issues.

Thailand: In his meeting with the Thai Minister of Foreign Affairs, Don Pramudwinai, Borrell reiterated the EU’s willingness to broaden its engagement with Thailand by preparing for the signature of the Partnership and Co-operation Agreement and by taking steps towards the resumption of negotiations on a Free Trade Agreement. He also stressed the importance of political space in Thailand remaining open and with the fundamental freedoms protected.

Cambodia: Borrell met with the Minister of Foreign Affairs, Prak Sokhonn and expressed gratitude for Cambodia hosting the ASEM Summit next year. He reiterated the importance of Cambodian authorities taking immediate action to open the political space in the country, to establish the necessary conditions for a credible, democratic opposition and to initiate a process of national reconciliation through genuine and inclusive dialogue.

Vietnam: Borrell met with the Foreign Minister of Vietnam, Pham Binh Minh and discussed priorities for Vietnam’s Chairmanship of ASEAN in 2020 including negotiations for a Code of Conduct for the South China Sea. He looked forward to deepening EU-Vietnam relations in the fields of security, trade and environment; and welcomed Vietnam’s contribution to EU Common Security and Defence Policy missions. He urged further steps to guarantee the protection of fundamental freedoms, including freedom of expression

Kazakhstan: Borrell met with Foreign Minister Mukhtar Tleuberdi to discuss enhancing bilateral relations including on trade, connectivity and energy, in the framework of the new EU-Central Asia Strategy.