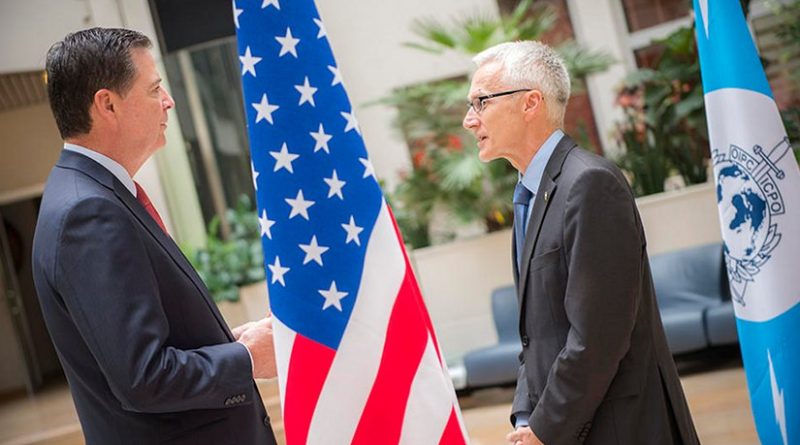 INTERPOL and the US Federal Bureau of Investigation (FBI) are forging closer ties in combating organized crime and terrorism in the face of an ever-increasing number and range of global threats.

One of the main areas identified for increased information-sharing was in counter-terrorism, in particular the identification and interdiction of foreign terrorist fighters. With UN Security Council Resolution 2178 identifying INTERPOL as the ‘global law enforcement information sharing’ platform against foreign fighters, more than 50 countries including the US, have already provided information to INTERPOL on some 5,000 suspected and confirmed fighters linked to Syria and Iraq.

“Recent events underscore the pervasive nature of international terrorism and the increased need to share information. INTERPOL plays a crucial role by ensuring law enforcement agencies have access to real-time intelligence, which assists in identifying and countering common threats in order to protect those we serve,” added Director Comey.

Director Comey was updated on the development of new operational tools being developed by INTERPOL to assist law enforcement in tracing and recovering criminal assets and combating corruption. These include the proposed creation of a new INTERPOL notice to assist member countries to locate, identify, obtain information about, monitor, seize, freeze and/or confiscate assets.

“As we face an ever-increasing range and scope of crime and terror threats, international cooperation between law enforcement agencies has never been so important,” said Secretary General Stock.

“INTERPOL plays a unique role in assisting police in each of our 190 member countries to identify and share intelligence leads, bridge information gaps and disrupt the organized networks behind a range of crimes which are often interlinked.

“However, this is not possible without the support and input from agencies such as the FBI, and I look forward to our working even more closely in the future to the benefit of the global law enforcement community and citizens worldwide,” concluded the INTERPOL Chief.

Connecting the FBI to the International Child Sexual Exploitation (ICSE) image database hosted at the INTERPOL General Secretariat, which helps coordinate global efforts against online child abuse, was also identified as an important area for future cooperation and to avoid duplication of effort.

The ICSE database helps identify an average of eight victims of child sexual abuse every day. More than 7,600 victims and 3,800 offenders have been identified thanks to the global collaboration of specialized law enforcement officers using the ICSE database.

As the continued expansion of access to the Internet provides organized crime networks with increased opportunities to commit cybercrime, often to fund other illegal activities, cybersecurity was also high on the agenda.

Earlier this year the FBI took part in an INTERPOL-coordinated operation targeting the ‘Simda’ botnet which had infected an estimated 700,000 computers worldwide and resulted in the seizure of servers used by cyber criminals to gain remote access to computers around the world.

The FBI also provides significant support to INTERPOL’s Chemical, Biological, Radiological, Nuclear and Explosives programme both financially and in the secondment of staff.