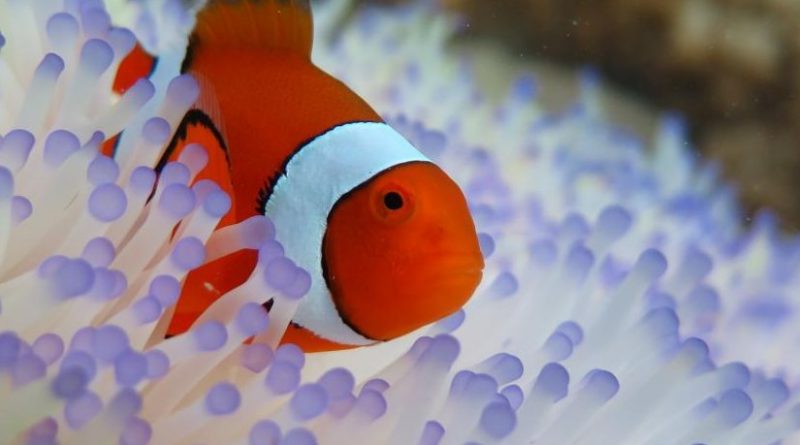 Clownfish, the star of Disney's "Finding Nemo" and the upcoming sequel, are at risk because of the increase bleaching of their homes, sea anemones. The uptick is due to a rise in ocean temperatures. Credit: Jessica Stella / Great Barrier Reef Marine Park Authority

Clownfish became a household name over a decade ago when Disney released the movie “Finding Nemo.”

Found exclusively in the Indo-Pacific, clownfish are symbiotic animals that only live in sea anemones, a close relative of corals that don’t have a hard outer shell. The anemone provides a home and protection for the clownfish, while the clownfish provides food for the anemone.

As global concern grows for Australia’s Great Barrier Reef – which is experiencing the worst bleaching event in its history due to sustained high ocean temperatures amid a strong El Nino weather pattern – University of Delaware researcher Danielle Dixson has co-authored a paper demonstrating how vulnerable clownfish are to the increased frequency of bleaching events.

Published today in Proceedings of the Royal Society B: Biological Sciences and co-authored with Anna Scott, a researcher at Southern Cross University in Australia, the paper illustrates that while clownfish can identify – through smell alone – if their potential home is bleached or healthy, they are inflexible in selecting a habitat.

“Unfortunately, our research has shown that bleaching does not break the symbiotic relationship between the anemone and clownfish. Clownfish are so behaviorally linked to one or a few particular anemone species for a home, that it limits their ability to acclimate if an entire reef bleaches,” explained Dixson, an assistant professor of marine science and policy in UD’s College of Earth, Ocean, and Environment.

“This means that clownfish are setting themselves up for bigger risk because we know that fish that go to bleached coral or anemones have an increased predation risk.”

“Clownfish are all habitat specialists in that they live exclusively in anemones, but some are more specialized than others. We wanted to see if the chemical cues coming from a bleached anemone were different than a nonbleached host and, if clownfish can recognize that a host is bleached, how hardwired are they to select a host versus a healthy non-host species?” explained Dixson.

In their study, the researchers tested five species of clownfish and three host sea anemones to determine whether the fish had the olfactory capability to distinguish between bleached and unbleached hosts, and how this may affect settlement decisions. The fish were individually placed in a small vessel called a choice flume containing two streams of water flowing parallel at identical rates but containing different chemical cues.

Dixson, an expert in understanding chemical cue use in fish, recorded the fish’s location every 5 seconds over a two minute period; then switched the water source and repeated the test with the chemical cues on the opposite side of the flume to validate the data.

These findings highlight the potentially harmful indirect effects declining habitat quality can have on species like clownfish, who are very specific about their habitat.

“Broadly, if bleaching incidents continue to increase in frequency there is a risk to species survival,” Dixson said.

For clownfish species that have a broader geographic range, if temperatures get too hot and the anemones bleach in one region, Dixson said, theoretically on a species level, the clownfish could potentially shift their distribution to cooler waters.

“The exception to this idea is A. latezonatus, which are already at the lower limit of their habitat; they can’t really move further south unless the anemones migrate, too,” Dixson said. “And then there is P. biaculeatus, which only lives in a specific anemone, the bubble-tip anemone, and won’t use an alternative, even when its home is unhealthy.”

As moviegoers with young children anxiously await Disney’s follow up film, “Finding Dory,” scheduled for release next month, Dixson remains apprehensive about the fate of anemone and clownfish and other reef species that call Australia’s Great Barrier Reef home.

“Some of the corals must be over a hundred years old and now they are completely white. It’s devastating,” Dixson said. “If, on Lizard Island where I did my doctoral work, 80 percent of the reef bleaches, the remaining 20 percent cannot support all of the species.”

Equally concerning is the clownfish’s inflexibility when it comes to house hunting.

This can prove problematic, because once established, clownfish cannot relocate easily due to the species’ innate hierarchy. They are sequential hermaphrodites, which means that all clownfish are born male and the largest on a particular anemone becomes the female. The next largest male is the reproductive male, while the others queue up behind waiting for their chance to reproduce.

“It’s not like if your anemone bleaches an adult clownfish can go to the next anemone and be accepted. Clownfish can live decades. Just think if you waited 20 years for your chance to be reproductive, it’s a big deal if someone jumps the line and breaks the order. So they are aggressive when it comes to protecting their place,” Dixson said.

In related research, Rohan Brooker, a UD post-doctoral fellow working with Dixson, is investigating the way marine animals use chemistry to hide from predators, a process known as chemical crypsis. Brooker recently received a grant from National Geographic to explore the behavioral and biochemical processes that drive chemical crypsis.

On coral reefs, chemical crypsis has the potential to affect how predators and prey interact and so could influence many important ecological processes, including how clownfish or other fish will hide in an increasingly bleached environment. With this new funding, Brooker will work to determine how this mechanism influences predator-prey dynamics and to identify how it will be affected by degrading coral reef environments.