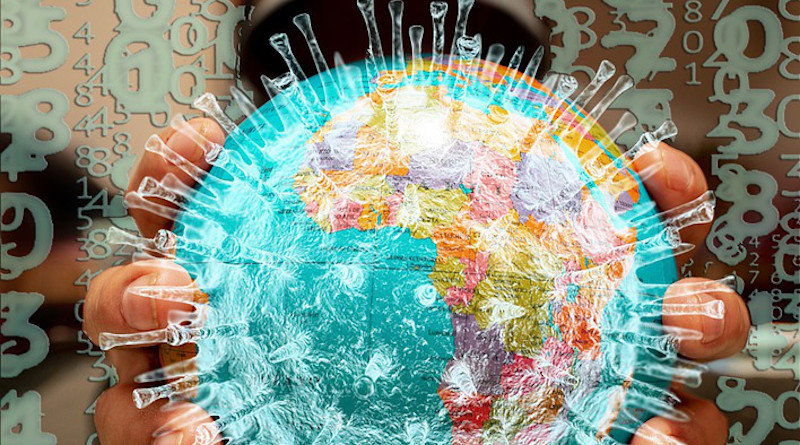 The humans and the viruses are two forms of life with parallel but different adaptive strategies. According to the abbreviated story I am offering you, our pre-hominid ancestors crossed the line separating non-human from human and became homo sapiens when they became the cultural animals.  It culminated a long process.  The human body gradually became the home of a soul, designed to live in a group possessing a culture.

Our hominid ancestors, who were relatively slow and weak compared to many other mammals, adapted to environmental challenges by inventing innovative ways to work together for the common good; for example, gathering, hunting, caring for children, and defending against enemies together.    They passed functional customs (also known as morals or ethics) on to their descendants by education.   As the evolutionary biologist David Sloan Wilson put it, compared to the slow pace of change of many species that adapt by random genetic mutation followed by natural selection, not just the brain but indeed the configuration of the human body as a whole, ´allows human history to be seen as a fast-paced evolutionary process with cultural rather than genetic mechanisms of inheritance. ´

Viruses won an adaptive advantage over other species accelerating their responses to environmental challenges going a different route.  In the words of Wikipedia: Viruses have short generation times, and many—in particular RNA viruses—have relatively high mutation rates (on the order of one point mutation or more per genome per round of replication). This elevated mutation rate, when combined with natural selection, allows viruses to quickly adapt to changes in their host environment. In addition, most viruses provide many offspring, so any mutated genes can be passed on to many offspring quickly.

We and the virus are similar because our survival strategies succeed by innovation.  In our case the innovation is normally a culture that educates people — often employing ceremonies and storytelling–, to work together for the common good. (See C.H. Waddington (1960).  The Ethical Animal. London:  George Allen & Unwin; Howard Richards (2019).  Moral and Ethical Realism.   Journal of Critical Realism. Volume 18, pp. 285-302; John Dewey (1898).  Evolution and Ethics.  The Monist.  Volume 8, pp. 321-341.)

Charles Darwin explained the competitive advantages of collaborating for the common good this way: ‘Selfish and contentious people will not cohere, and without coherence nothing can be effected. A tribe rich in the above (cooperative HR) qualities would spread and be victorious over other tribes: but in the course of time it would, judging from all past history, be in its turn overcome by some other tribe still more highly endowed. Thus the social and moral qualities would tend slowly to advance and be diffused throughout the world.’

A common argument against Darwin, and against whoever believes that pro-social emotions were hard-wired into the human body by the requirements of survival during 90% or more of human evolution, is that they prove too much.    They prove that we behave better than the evidence shows that we actually do behave.

In reply, let me suggest, first, that there is a plausible explanation at the heart of our failure to live out the best of human nature, and that the current pandemic shows how crucial it is to change it.   And, second, that the smartest of the business leaders are realizing that their own fate and the fate of all of us depends on replacing the essence of capitalism with an ethics of solidarity.

First: Consider my following effort to write a précis of a plausible socialist analysis of why the very essence of capitalism has to change to save humanity and the biosphere:

Why do the accumulators (regarded as the quintessential capitalists, whose purpose in life is to turn money into more money) win out over the carers and sharers?  Why do the accumulators win and the carers and sharers lose, even though the practices of the latter are enjoined by the world´s main religions, are hard-wired into the human body, and must have been practiced for thousands of years by our ancestors or they would not have survived and we would not be here today?   Why does modernity tend to be, as Max Weber said it was, an iron cage that traditional peoples can enter but cannot exit?   It is because once their daily bread comes to depend on the confidence of investors that producing bread will be profitable, they become prisoners of the homeostatic mechanisms described below.

The key word is:  Accumulation. Capital accumulation is called ‘profit’ or ‘the profit motive’ by many.

There is a reason why the world is not ruled by moral development, and a normal diversity of cultures multiplying the options of moral systems for achieving cohesion and meeting needs.  The reason is that accumulation rules the world.  There is a reason why after a century of struggle most of humanity ended up in the year 2000 dominated by the same free market ideology that was dominant in 1900.  It is that accumulation (also called the free market, or simply freedom) has a homeostatic quality.   When accumulation is perturbed, compensatory mechanisms are set in motion: For example, capital flight, tax competition between countries, –lowering taxes to attract business; thus defunding the welfare state while at the same time funding neoliberal think tanks and university chairs; inflation and unemployment.  These unintended consequences force the establishment of one or another regime of accumulation by the ballot or by the bullet.   (A regime of accumulation is, roughly — a set of institutions that motivates investors to invest.)  Not infrequently, as in Chile after the 1973 coup, the goal of raising investor confidence is pursued by lowering wages, lowering taxes on business while raising VAT (sales) taxes, breaking unions, violating elementary human rights (e.g. ‘disappearing’ opponents), privatizing the public sector, offering guarantees to foreign investors, and so on.  Many of the people who did it were ´Chicago Boys´ convinced that their theories were correct, supported by military leaders convinced in their own minds that they were patriots saving their country.

Second: Compare the paragraphs above with these (renumbered) highlights of the Davos Manifesto of the World Economic Forum declared on March 20, 2020:

I. A company treats its people with dignity and respect. It honours diversity and strives for continuous improvements in working conditions and employee well-being.

II. A company considers its suppliers as true partners in value creation. … It integrates respect for human rights into the entire supply chain.

III. A company serves society at large through its activities, supports the communities in which it works, and pays its fair share of taxes. … It acts as a steward of the environmental and material universe for future generations. It consciously protects our biosphere and champions a circular, shared and regenerative economy. It continuously expands the frontiers of knowledge, innovation and technology to improve people’s well-being.

IV. A company is more than an economic unit generating wealth. It fulfils human and societal aspirations as part of the broader social system. Performance must be measured not only on the return to shareholders, but also on how it achieves its environmental, social and good governance objectives….

V.  A company … acts … as a stakeholder – together with governments and civil society – of our global future. Corporate global citizenship requires a company to harness its core competencies, its entrepreneurship, skills and relevant resources in collaborative efforts with other companies and stakeholders to improve the state of the world.

*** The Complete Davos Manifesto Can Be Read Here ***

In any event, to what extent to regard points One and Two as:

A practical point: If all companies operating were to comply with the ideals declared at Davos in 2020, there would be fewer companies.  At least there would be fewer companies operating without some form of subsidy. Many companies today (for example some that source from Asian sweatshops) do not generate enough revenue to pay a living wage to the workers who produce their products (much less comply with all the Davos ideals) and still make what Alfred Marshall called a normal profit.  (A normal profit is a profit large enough to motivate the entrepreneurs to keep the business running). Here is a cue for unbounded organization (www.unboundedacademy.org) to take centre stage.  UO develops methodologies for organizing dignified livelihoods for all.   Such a dénouement does not mean unemployment for managers.  One of the many things it means is that many of those with a vocation and a talent for leadership will be leading different kinds of organizations.

*Prof. Howard Richards now teaches at the University of Santiago and the University of Cape Town.  He is a member of the TRANSCEND Network for Peace Development Environment. He was born in Pasadena, California but since 1966 has lived in Chile when not teaching in other places. Professor of Peace and Global Studies Emeritus, Earlham College, a school in Richmond Indiana affiliated with the Society of Friends (Quakers) known for its peace and social justice commitments. J.D. Stanford Law School, MA and PhD in Philosophy from UC Santa Barbara, Advanced Certificate in Education-Oxford,  PhD in Educational Planning from University of Toronto. Books:  Dilemmas of Social Democracies with Joanna Swanger, Gandhi and the Future of Economics with Joanna Swanger, The Nurturing of Time Future, Understanding the Global Economy (available in PDF on line), The Evaluation of Cultural Action, Following Foucault:The Trail of the Fox (with Catherine Hoppers and Evelin Lindner),  (on Amazon as an e book), Unbounded Organizing in Community (with Gavin Andersson, also on Amazon),  Rethinking Thinking (with Catherine Hoppers),  Hacia otras Economias with Raul Gonzalez, free download available at www.repensar.cl. Solidaridad, Participacion, Transparencia: conversaciones sobre el socialismo en Rosario, Argentina. Available free on the blogspot lahoradelaetica.

Home » The Humans And The Viruses: The World Economic Forum And The Coronaviruses – OpEd