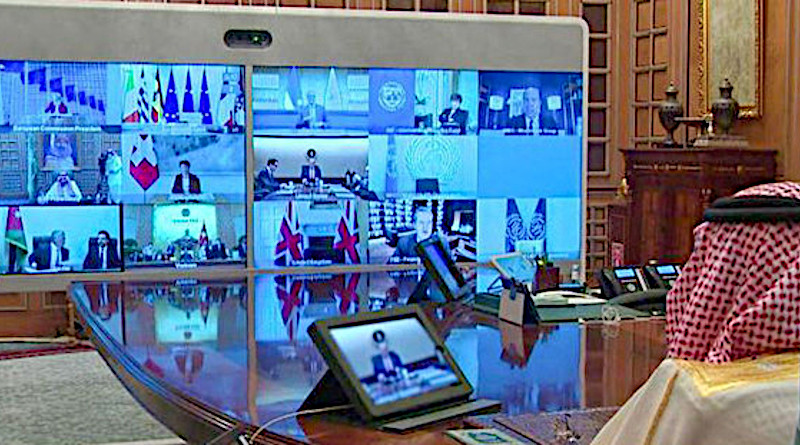 Saudi Arabia's King Salman presides over an extraordinary meeting of G20 leaders where all delegates put social distancing to the extreme in a virtual conference, with all delegates dialing in from around the world. (SPA)

Leaders of the biggest countries on Thursday took part in an extraordinary “virtual summit,” under the auspices of the Saudi Arabia G20 presidency, to combat the threat to lives and livelihood from the coronavirus disease COVID-19 — and issued a call for global action in the face of an unprecedented crisis.

“We are strongly committed to presenting a united front against this common threat,” they said after two hours of digital debate organized by the Saudi G20 team in Riyadh.

“We will protect human life, restore global economic stability and lay out solid foundations for strong, sustainable, balanced and inclusive growth,” the leaders added in their joint statement.

The traditional communique from the national leaders and other international leaders — which is expected after G20 summits but often delayed as a result of last-minute quibbles about wording and content — was published only minutes after King Salman closed the meeting.

In the face of the global pandemic, there seemed to be little disagreement that urgent and concerted action was necessary.

“The G20 is committed to do whatever it takes to overcome the pandemic, along with the World Health Organization, International Monetary Fund, World Bank Group, United Nations and other international organizations, working within their existing mandates. We are determined to spare no effort, both individually and collectively,” the leaders said.

The meeting — the first “virtual” summit in the G20’s 21-year history — was staged ahead of the planned full gathering in Riyadh in November, and conducted digitally because of the restrictions on air travel.

It had a two-fold agenda: To discuss ways to tackle the life-threatening COVID-19 disease, and how to mitigate the economic and financial repercussions of the outbreak.

Because of the volatility in global energy markets, caused by falling demand and a surge in supply following the collapse of the OPEC+ output-curb agreement two weeks ago, some oil-industry observers had expected the meeting to address energy issues, too. However, this was never part of the G20 agenda, and the words “oil” and “energy” did not appear in the final 1,500-word communique.

On the need to fight the global pandemic, the G20 agreed “to take all necessary health measures and seek to ensure adequate financing to contain the pandemic and protect people, especially the most vulnerable.”

The leaders said they would share medical information and strengthen global health systems, as well as cooperating on the search for, and production of, treatments for the virus.

“We will expand manufacturing capacity to meet the increasing needs for medical supplies and ensure these are made widely available, at an affordable price, on an equitable basis, where they are most needed and as quickly as possible,” they said in the communique.

The leaders also made a commitment to provide resources to a range of international health organizations on a voluntary basis, and asked other countries, organizations and philanthropies to do the same.

Further measures to develop anti-pandemic skills and resources that can be used to tackle infectious diseases will be discussed by the WHO and G20 finance and health ministers at the next meeting “with a view to establish a global initiative on pandemic preparedness and response.”

“This initiative will capitalize on existing programs to align priorities in global preparedness and act as a universal, efficient, sustained-funding and coordination platform to accelerate the development and delivery of vaccines, diagnostics and treatments,” the G20 added.

As an organization with its origins in meetings of economic and financial policymakers, the G20 paid special attention to the effects the pandemic is having on economic growth and stock markets, which have suffered big reversals in the past two weeks.

“We will use all available policy tools to minimize the economic and social damage from the pandemic, restore global growth, maintain market stability and strengthen resilience,” the leaders stated in their communique.

“We are injecting over $5 trillion into the global economy, as part of targeted fiscal policy, economic measures, and guarantee schemes to counteract the social, economic and financial impacts of the pandemic.

“We will continue to conduct bold and large-scale fiscal support. Collective G20 action will amplify its impact, ensure coherence and harness synergies. The magnitude and scope of this response will get the global economy back on its feet and set a strong basis for the protection of jobs and the recovery of growth,” they added.

G20 finance ministers and central bankers — who have met four times since fears about the economic effects of the virus outbreak began to affect the global economy — will continue to meet regularly, under Saudi auspices, to “develop a G20 action plan in response to COVID-19 and work closely with international organizations to swiftly deliver the appropriate international financial assistance.”

Governments around the world — with the exception of the second-biggest economy, China — have pumped hundreds of billions of dollars into support mechanisms for financial and credit markets. The communique was unanimous, leading some observers to suggest that China is planning a big intervention in financial markets.

“We support the extraordinary measures taken by central banks consistent with their mandates. Central banks have acted to support the flow of credit to households and businesses, promote financial stability and enhance liquidity in global markets,” the leaders said.

In addition, the communique included a commitment that they will consider the effects of the pandemic on heavily indebted developing countries.

The G20 also displayed a united front on global trade and international cooperation, two issues that have proved divisive recently as the US has confronted several nations over trade and multinational alliances.

Emergency measures aimed at protecting health will be targeted, proportionate, transparent and temporary. We task our trade ministers to assess the impact of the pandemic on trade,” the leaders agreed.

“We reiterate our goal to realize a free, fair, nondiscriminatory, transparent, predictable and stable trade and investment environment, and to keep our markets open,” they added, pledging to coordinate responses to the virus threat “to avoid unnecessary interference with international traffic and trade.”

The G20 also highlighted the risks to the poorer African countries with less-developed health systems during the current emergency.

“We consider that consolidating Africa’s health defense is a key for the resilience of global health,” the leaders said.

They also praised the decision of the international sporting authorities to delay the Olympic Games that were due to be staged this summer in Japan — a G20 member — and pledged that the event will go ahead no later than summer 2021 “as a symbol of human resilience.”

“Today, I sold more than Rs 2,500 worth flowers,” says an exhilarated Vishnu Shinde, “much more than I sold in