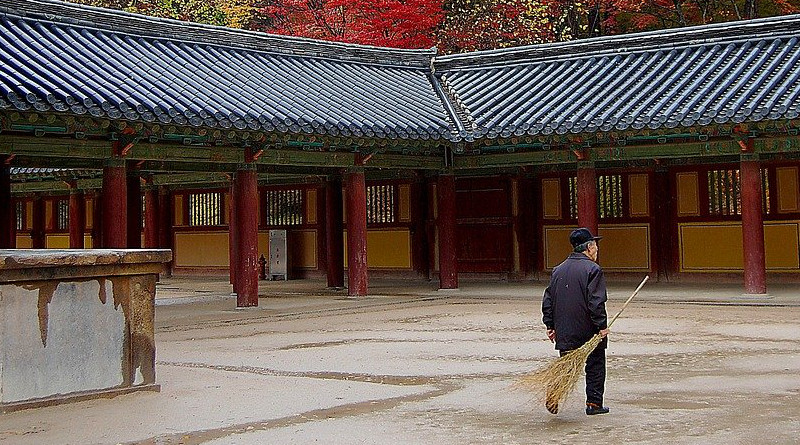 South Korea has one of the fastest-aging populations in the world. Over the next 30 years, the share of Korea’s population age 65 and older is projected to grow from 15 to 40 percent. Given this extreme rate of population aging, South Korean policymakers face two critical challenges—ensuring an adequate level of support for the elderly while maintaining robust economic growth.

Keeping healthy older people in the labor force can help achieve both these goals. But how much scope does Korea actually have to increase the labor income of older workers? The answer depends on whether older people who are not working could go back to work and whether those who are working could be employed more productively.

Pushed out of careers and living in poverty

They need these jobs because other sources of retirement support are limited. The traditional family support system is deteriorating, and low interest rates for the past 20 years mean that asset income from saving is extremely low.

Thus the incentive for Koreans to continue working into old age is high. Among the population age 65 and older, one-third (32 percent) are employed—quite a high rate among developed countries—but nearly two-thirds (62 percent) of these are in low-paying temporary positions.

Despite this relatively high employment rate, in 2017, almost half (44 percent) of South Koreans aged 65 and older were living in poverty, compared with 17 percent of the population as a whole. In other words, although many older Koreans are working, more than four out of 10 earn less than 50 percent of the median income.

What is the scope for improving old-age incomes?

In a recent study, we estimated how health status and pension benefits affect employment among older men in Korea. The goal was to identify how many elderly men are not working but could and how much their increased labor productivity might contribute to economic growth. Due to data limitations, we were only able to consider the health status, pension benefits, and labor-force participation of elderly men, not women.

Most older men in Korea report that their health status is good, very good, or excellent, including those who are working and those who are not. This suggests that there is an untapped potential to raise the earnings of elderly Koreans and increase their contribution to economic growth by bringing healthy individuals who are currently not working back into the labor market.

In contrast to observations in other countries, pension benefits in Korea do not appear to discourage older men from working. For one thing, labor-force participation does not drop abruptly when men become eligible for a pension, as it does in other countries. Rather, the likelihood of working tapers off gradually throughout old age.

In addition, men who receive a pension are not noticeably less likely to work than men who do not. This is perhaps not surprising since pension benefits are so modest. It also suggests that other factors, including labor-market conditions and alternative sources of old-age support such as savings and family transfers, can have an important influence on labor market participation at older ages.

If all Korean men age 60–79 with good to excellent health joined the labor force at the average income level for their age group, total labor income in Korea as a whole would be higher by an estimated 1.3 percent, resulting in a proportionate contribution to economic growth. This is much less than the potential gain in Japan (at 4.7 percent) or the United States (3.1 percent), but it is not negligible.

The potential economic gain from bringing older men who are unemployed back into the labor market is limited in Korea because so many of them are already working. Rather, the problem is that they earn so little. To improve the economic status of the elderly and boost economic growth, a more promising approach would be to reduce the current rigidity in the labor market that tends to push healthy older people out of their careers and into much lower-paying jobs well before they reach the official retirement age. Re-training programs could also help healthy retirees obtain good-paying jobs.

Korea’s traditional seniority-based wage system makes older workers relatively expensive and encourages employers to replace them with younger workers. A shift to a wage system based on performance would provide an incentive to retain older workers who perform well. Another option would be to expand the “peak-wage system” under which companies pay senior employees reduced salaries after a certain age, generally between 55 and 60, in return for extending their retirement age by a few years.

Efforts to increase employment among the elderly in Korea have run into opposition from employers as well as some of the public, who are more concerned with tackling the soaring unemployment rates among young adults. As older Koreans become a larger proportion of the population, however, raising their labor income would improve their economic status and at the same time contribute to the economic growth of the country as a whole.

This East-West Wire is based on Health and work capacity at older ages: Evidence from the Republic of Korea, by Sang-Hyop Lee, Cheol-Kon Park, and Andrew Mason. Manila: Asian Development Bank, 2020. The views expressed do not necessarily reflect the policy or position of the East-West Center or of any other organization.