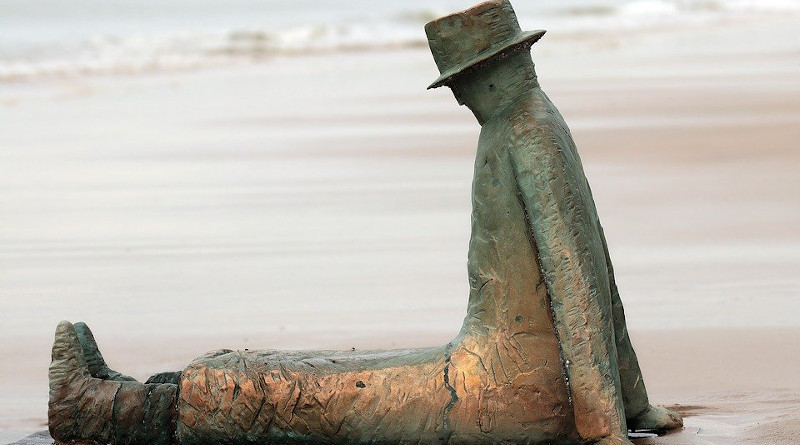 It was based on a best seller fiction, which took place five years later in year 1964. That year there was a nuclear war in the world, after the nuclear bombs collapsed the major city centers, the nuclear fallout was carried by the clouds. The people of the city of Melbourne, Australia, where the fallout has not yet come, waits to an inevitable end.

During the nuclear war, an American submarine stays under sea water, then surfaced, and approaches Melbourne docks. The officers on the ship question nuclear war among themselves. Soon the inevitable end comes, Melbourne streets remain empty,

I watched the movie in my childhood in an Anatolian town on the wooden chairs of the summer cinema. I have young officer Antony Perkins in my childhood memory, I found the movie after long scans on his name, I watched it on youtube, it made a lot of impact in its time,

Nowadays, we watch on TVs the streets of Milan, Rome, Berlin, London, NewYork, Istanbul. All streets are empty in the covid-19 process. There is no nuclear war, but it has happened with a very similar circumstances during covid-19 outbreak. Politicians began to say that the epidemic has ended all over the world, however they do not go out of isolation themselves, however they encourage people to go to malls, beaches, schools, places of worship, factories. Donald Trump encourages people to ignore the unnecessary measures of state governors, and to open churches”

Brazil missed to take the necessary precausions, the southern hemisphere is entering the winter season, human losses are increasing,

No matter how much they hide in Russia, the numbers of losses are increasing.

India has extended the curfew, but the poor are on the streets, unemployment is terrible. Second wave anxiety started in China. Japan, Korea, Taiwan.

There is no need for army, soldier, tanks, rifle, ship, aircraft any more. There is no old war order, the new normal war is completely different. Security forces are driving people away from the promenade from the parks, but some nations are lining up for shopping malls, football matches and umrah visits.

Gathering performance in opera, concert, cinema halls are obsolate now.
There  is no possibility of watching new movies, tv series, football games. Even if  writers are in closed environment, poetry, story, fiction script work can be done, however people are also confused, most writers are reluctant to produce due to  “writers’ block” in their minds, they cannot write anything. Your author’s computer icloud memory, ipad and iphone capacity are full, the desktop screen is down, it does not work, it is difficult to upgrade, in many countries import tax came to the purchase of new imported devices, how will these be done in the domestic market? In the meantime, we all used Zoom application software, we invite to join the invitation.

It is estimated that the measures have taken the first wave of the epidemic. The vaccine is still absent, the drug is still absent. Remedy is in quarantine methods, hand washing,  mask, entube and oxygen supplements in ICUs to patients.

Countries with a solid economy, such as Germany, Canada provided cash aid to their citizens in need. Other countries are trying to save time with the curfew. Politicians want the economy to open and the factories to work as soon as possible.

But in the contruction projects contracts, we came across unprecenteed events that we wrote and passed as a “force majeure” clause and that we never used. It is very difficult to build a construction site in remote areas, to work there, to work on projects, to work in underground mines, in narrow congested offshore platforms, perhaps without new safety regulations.

Everyone enters into quarantine for a long time, even if you are an high profile administrator, it does not matter even if you have guards, big cars, private planes. 65+ elderly people all over the world have experienced rapid aging because they could not access healthcare services other than covid-19 treatment. EyeGlass numbers increased, they could not be renewed, the need for a dentist could not be met, chronic diabetes cardio, blood pressure diseases increased rapidly.

Cars did not leave parks where they had been for two months, and  people could not change from winter tires to summer tires. Car repair maintenance jobs are idle. Subways, city buses are limited. Small tradesmen, artisans cannot sell. Meet processing plants  do not work, agricultural products cannot be collected, serious nutritional problems may be waiting for us in the long term.

We should all know that the “new normal” orderis in place and it is very much different from the old one we left. There is no way we can go back. Long distance Airplane travels, summer holidays in remote countries, intercity trips, shopping malls, multi-audience sports events, crowded schools, crowded student halls are now too difficult to realise.

During pandemic days, your writer wants to write a few pages of memoria every day during the covid-19 outbreak, but he can write  only this much.