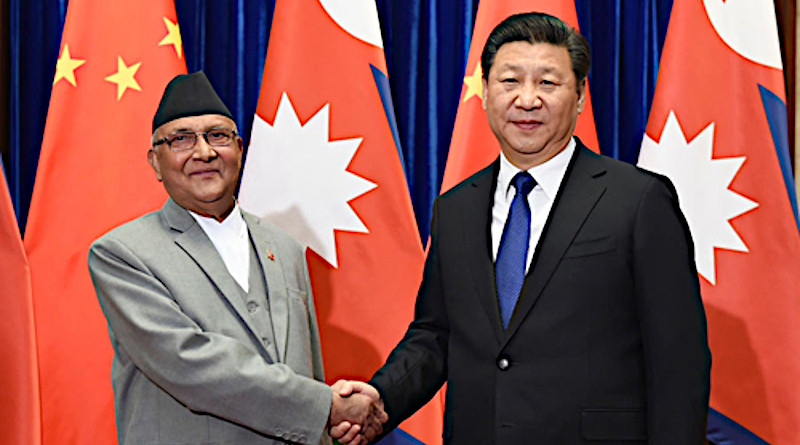 The new political map of Nepal shows Indian areas of Limpiyadhura, Lipulekh and Kalapani in Nepal. Lipulekh Pass is on the Line of Actual Control (LAC) between India and China-occupied Tibet. Indian troops have been deployed at Limpiyadhura and Kalapani over the past five decades. India has responded by saying the new map amounts to “artificial enlargement of territorial claims” that are not acceptable. However, Prime Minister K P Sharma Oli told Nepal’s Parliament that the constitution will be amended to formalize this map and diplomatic efforts will be made to bring back the territories. Oli also said the virus from India looks more lethal than Chinese and Italian; despite India aiding Nepal to fight COVID-19.

On May 8, after India’s Defense Minister Rajnath Singh inaugurated a road to Lipulekh Pass on the LAC for Kailash Mansarovar pilgrimage, Nepal called it territorial violation though India’s foreign ministry had said the road was completely within India. Indian Army chief, Gen M M Naravane told the media, “Nepal’s ambassador had mentioned that the east side of Kali Nadi (Mahakali River) belongs to them. There is no dispute in that. The road which we have constructed is on the west side of the river…. they might have raised the issue on the behest of someone else. That is very much a possibility.”

Nepal’s new map mirrors China’s cartographic patent; Beijing is clearly behind Nepal’s anti-India stance. Interestingly, Kathmandu-based Greater Nepal displays a map showing areas in India and even Bangladesh belonging to Nepal; reflecting China’s dream to cut off India’s northeast sometime in future!   The China-sponsored bloody Maoist insurgency in Nepal killed 19,000 Nepalese between 1996 and 2005, internally displacing 100,000-150,000. In June 2001, Nepal’s royal family was massacred. China brought together Communist Party of Nepal (UML) and Communist Party of Nepal (Maoist Centre) to establish a government in Nepal opposed to the US and India. China has turned Nepal’s Hindu kingdom into a communist-dominated country through a bloody insurgency. Is Beijing’s politico-economic and anti-India campaign is succeeding?

Oli and Puhpa Kumar Dahal, popularly known as Prachanda, both belong to Communist parties linked to the Maoist insurgency. Oli was arrested in 1970 for subversive politics and later imprisoned for 14 years (1973-1987) heading the Jhapa Movement responsible for several killings. He was earlier prime minister from October 2015 to August 2016. Dahal headed Communist Party of Nepal (Maoists) during the civil war and served twice as prime minister – 2008-2009 and 2016-20017. Dahal  reportedly told the Nepalese media in 2012: “Our war will finally be with Indian Army”. Given these credentials, China needed no effort to cultivate Oli and Dahal!

Oli withdrew Nepalese army participation at the last minute from the BIMSTEC multi-nation counter-terrorism (CT) exercise organized in India during September 2018, instead making them participate in a CT exercise in China in the same month. China has the largest FDI in Nepal and Chinese presence in economic, political, cultural and strategic spheres is rapidly rising especially with Nepal joining China’s Belt and Road Initiative (BRI) in 2017. Anti-India sentiments in Nepal are continuously induced by Beijing. Pakistan’s ISI and Lashkar-e-Taiba (LeT) are active in Nepal. Huo Yangi, China’s ambassador in Nepal, who has served abroad in America and Pakistan, aims to develop Nepal-China relations similar to China-Pakistan, including building Nepal’s sub-conventional muscle for the benefit of China. Chinese development projects globally have a covert presence of PLA, as would Nepal. ISI and LeT are engaged in radicalizing sections of Nepalese Muslims. Muslims are 4.4 percent of Nepal’s 28 million population. Recent intelligence reports indicated radicals in a Nepalese mosque plotting to spread COVID-19 in India. Nepal has given oil drilling rights to China in the Terai region bordering India where ISI-LeT are establishing themselves.

Nepalese Gorkhas are excellent troopers serving in some 38 infantry battalions of  the Indian Army (some 128,000 veterans draw pension from India) and in police plus other security organizations – all said to be around 45,000. Nepalese citizens working in the civil sector in India number about 1-1.5 million. During Nepal’s civil war, Nepalese serving in the Indian Army while on leave in Nepal were forced to impart weapon training to Maoists. Nepal’s Parliament has been mulling that Nepalese should not serve in foreign armies, albeit reallising that providing jobs within Nepal would be difficult.

Indian policy towards Nepal has been lackadaisical. Belief of mutual Hindu traditions should be viewed in the context of power in Nepal lying with the communists for whom religion is anathema. Anti-India sentiment induced by China, visible since years, was ignored. The 2015 Nepal blockade by default or design resulted in the Nepal-China Transit Transport Agreement under which Nepal can trade with third countries through some land and seaports in China. Demonetization was another blow since Indian currency was freely used in Nepal. Nepal also blames India for inciting Madhesis – the plainspeople who are of Indian origin – though it is Nepal’s internal problem.

There has been discord between Oli and Dahal but the Chinese ambassador brokered a truce between them. Oli was forced to withdraw two controversial ordinances he wanted passed to consolidate his own power. Some reports in Indian media say Nepal’s new map and Oli’s anti-India vitriolic are aimed at his own detractors within Nepal like Dahal and Madhav Kumar Nepal, a politician and former prime minister of Nepal. This is dimwitted or possibly planted to deflect attention. Make no mistakes, Nepal’s communists have made Nepal China’s proxy and pose a viable threat to India through borders having checkposts more than a kilometre apart. Terrorists have been coming via Nepal to sabotage railway lines in India. India must review its foreign policy and in dealing with Nepal’s communist parties. We must acknowledge money, though important is only one part how China draws countries into its strategic sphere.

*About the author:  Lt Gen Prakash Katoch (retd) is an Indian Army veteran. The views expressed are personal.

Home » Have Nepal’s Communists Made It China’s Proxy? – Analysis

2 thoughts on “Have Nepal’s Communists Made It China’s Proxy? – Analysis”

A University of California, Riverside, study that sought to determine barriers to health care among Spanish-speaking Latino farmworkers in rural communities has

US Seeks To Seize Iran Gasoline Shipments Heading To Venezuela