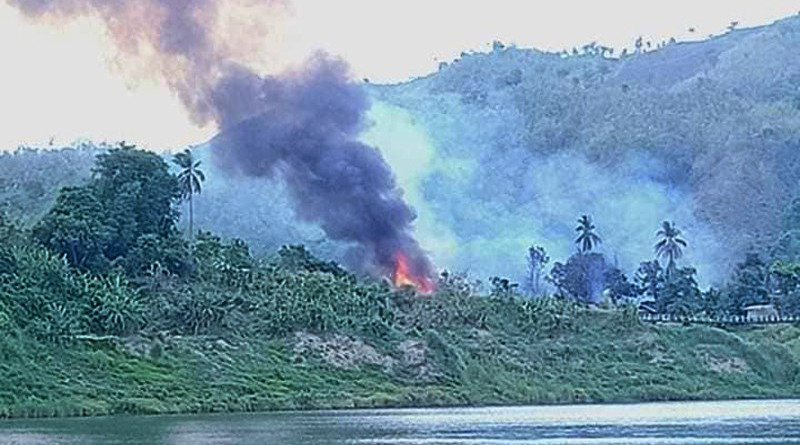 Houses went up in flames in the abandoned village of Meeletwa (lower) in Chin State’s Paletwa Township on May 26, according to the Chin State government.

The reason for the fire was not immediately known, Chin State government spokesperson U Soe Htet told DMG.

“It is correct that houses in the village caught fire. But we do not know the reason for the fire; whether it was arson or an artillery shell,” said U Soe Htet.

A Paletwa resident who requested anonymity claimed that it was arson.

“It was not started from negligence of fire because no one is living in the village. The fire started 15 minutes after soldiers entered the village,” the Paletwa resident said.

Meeletwa (lower) village is located on the east bank of the Kaladan River and villagers of the surrounding area witnessed the fire from a distance, the Paletwa resident said.

About 50 houses burned on Tuesday between 3 p.m. and 4 p.m., villagers estimated.

Villagers from Meeletwa (lower) fled to Paletwa town due to airstrikes in a clash near the village on March 21. The village of more than 100 houses was home primarily to ethnic Khumi people before it was emptied of its inhabitants.

Former residents wanted to go and see the fire in their village, but they had to watch the flames from afar because Tatmadaw personnel would not allow them to get close, said U Tin Maung, a resident of the village.

“We went to the village by motorboat to see the fire in the village. But we had to turn back before we reached the village because soldiers shot guns at us,” he said.

About 200 houses were burned down on May 16 in Lekka village, a similarly abandoned settlement in Arakan State’s Mrauk-U Township. That blaze was also reportedly preceded by a military contingent entering Lekka.