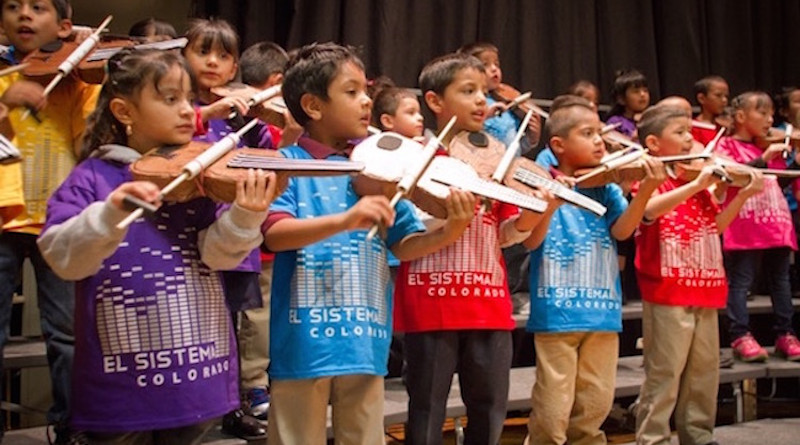 Simon Rattle, the former chief conductor of the Berlin Philharmonic and now conductor of the London Symphony Orchestra, has said that El Sistema in Venezuela is “The most important thing happening in classical music today in the world”. Julian Lloyd Weber, the renowned cellist, has said, “It’s surely the most extraordinary musical phenomenon of our times”.

It seems like whenever I switch on Mezzo, the superb French TV classical and jazz channel, I see either conductors, Valery Gergiev, maestro of the Mariinsky or Gustavo Dudamel, chief conductor of the Los Angeles Philharmonic. Gergiev, along with Rattle, are probably the world’s top conductors and Dudamel, close behind them but only 39 years old, is a graduate of El Sistema.

I visited Venezuela in 1980 when El Sistema was young. I was the first English-language journalist to write about it in my column in the International Herald Tribune. I’d heard about it from Robert Maxwell, the later disgraced British publisher and newspaper tycoon, who had published two of my books and a book partly on the then unknown El Sistema.

I was taken aback, not knowing what to expect. After a three-day visit I decided I had witnessed the template for musical education in the twentieth and twenty-first centuries. Time has proved that observation right. There is simply nothing quite like it. El Sistema has now been emulated far and wide all over the world.

On July 4 in the year before I visited, Luis Alberto Machado, the minister of state for the development of human intelligence held a press conference. He told the journalists that he was inviting them to a concert of the National Youth Orchestra. The program would include a Haydn symphony and the concluding choral part of Beethoven’s Ninth Symphony. “The violins”, he said, “will be played by 60 children aged five to nine who now surround me. Thirty-five of these children have only learnt to play in the last year and until recently they had never seen a violin in their life. They are Indian children from the Amazon who don’t even speak Spanish”.

So El Sistema entered the world. The press thought that Machado was crazy. More than that, what was the new Christian Democrat government of Luis Herrera Campins doing appointing a minister of human intelligence? (Years later, dictator Hugo Chavez was still funding the organisation.)

Machado had found a musical partner to his dreams, Jose Antonio Abreu. It was he who did the hard everyday work of building the El Sistema orchestra.

The concert took place before the president (Machado had been his chief-of-staff) and 500 guests. I have seen the video of the concert and talked to a number who were there. It was a remarkable occasion. The children played without a fault and with a flair that made them indistinguishable from the other members of the youth orchestra.

This exercise proved what Machado and Abreu had been saying and writing about the previous five years — that even the non-educated can rise to great achievement if the teacher believes that children, however deprived their background, have a great capacity for learning.

In the book that Maxwell had translated from the Spanish edition, “The Right To Be Intelligent” (Pergamon), Machado wrote, “The human brain has not varied since the upper Paleolithic Age. At birth, the minds of children of 40,000 years ago were the same as the minds of today’s children. Their difference lies in what they manage to learn. The mind of the caveman was already equipped to achieve the advances of the twentieth century. And he would have achieved them had he had a later generation to teach him”.

Machado and Abreu admitted that their musical effort was an experiment that worked in carefully controlled conditions. They invited to Venezuela one of the most successful teachers of the Japanese Suzuki method of violin instruction, Takeshi Kobayashi. The Suzuki method now used extensively in Europe and North America teaches very young children in a handful of years what they would normally not master until they enter a national academy of music in their late teens.

The success of the Venezuelan venture, taking only a two-and-a-half-month period, surprised even Kobayashi.  According to Frank di Polo, a former president of the youth orchestra, part of the reason must be the traditional musical ability of the Indian children, even though they had never heard or played Western classical music before. But an important part was the sheer determination of the teachers attached to the orchestra to make it work.

Machado’s infectious enthusiasm for developing musical possibilities was then extended to ordinary schools. His program integrated into the curriculum one or two lessons a week which have the specific purpose of “developing intelligence”, to teach pupils how to reason and think. The pupil learns to gather knowledge not by learning by rote or by cramming facts and ideas but by thinking for himself/herself from first principles. “The fruits of intelligence have been taught, but not how to have more intelligence”. He believed that deep down “every child is a genius”.

Forty years after my visit El Sistema has greatly expanded in size. Besides its main Simon Bolivar Orchestra, it has spun off 55 children’s and 102 youth orchestras in Venezuela and many abroad. It has created hundreds of musicians from the Indian villages of the interior, together with white and mestizo children, some, but not all, from the poorer neighbourhoods of the cities. They make up the whole Simon Bolivar Orchestra and have toured the world’s most famous concert halls, usually to rave reviews.

Dudamel, invited continuously to conduct all the world’s best orchestras, is its greatest alumna. He remains closely in touch with the orchestra that gave him his chance in life. He is committed to spreading its reputation and conducts many of its foreign appearances.

Forty years later I wish that in the educational world such techniques of learning could be adapted far and wide for all children to learn how to play music, indeed in every subject. But then the likes of Luis Machado, Jose Abreu or Gustavo Dudamel don’t come along very often.

Home » El Sistema Brings Forth Genius In Every Child – OpEd