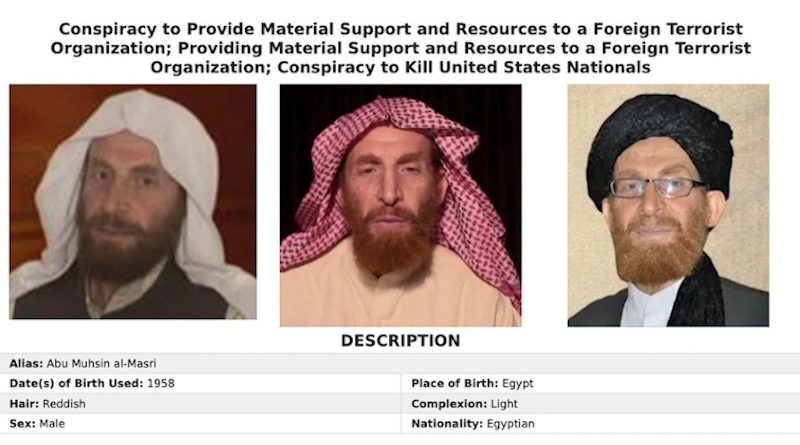 The United States has confirmed the death of a high-ranking al-Qaida official in Afghanistan, describing it as a major setback for the group despite some initial confusion in reporting about his seniority.

A U.S. official, speaking on the condition of anonymity, confirmed the death of al-Qaida’s Abu Muhsin al-Masri on Monday, saying U.S. forces provided support during the Afghan-led operation in the country’s eastern Ghazni province.

The White House later offered its own confirmation, praising the Afghan operation to take out al-Masri as “welcome news.”

The comments from U.S. officials come two days after Afghanistan’s National Directorate of Security (NDS) first announced al-Masri’s death in a tweet late Saturday, describing him initially as the number two official with the al-Qaida affiliate, al-Qaida in the Indian Subcontinent (AQIS).

The NDS also said al-Masri was close to al-Qaida leader Ayman al-Zawahiri, and that he had been living in Afghanistan under Taliban protection.

In response to the tweets from Afghanistan’s NDS, U.S. National Counterterrorism Center Director Christopher Miller told the Reuters News Agency late Saturday that the killing of al-Masri “is a major setback” for al-Qaida, though he declined to share additional details.

But multiple U.S. and international counterterrorism officials tell VOA that while still significant, al-Masri’s death is not the blow that has been depicted in some accounts.

Specifically, they say reports that indicate al-Masri was second in line to Zawahiri are wrong, confusing him with another al-Qaida official who sometimes uses the al-Masri alias.

They say the al-Masri killed in Afghanistan’s Ghazni province is Abu Muhsin al-Masri, also known as Husam Abd al-Ra’uf, a senior leader who most recently had been assigned to work with the Taliban on operational cooperation and the coordination of safe havens for al-Qaida fighters.

While both men have been on the FBI’s Most Wanted list, the State Department is offering up to a $10 million reward for information that brings Abu Muhammad al-Masri to justice.

But Ghani warned the operation shows “terrorism still remains a huge threat to Afghanistan, the region and the world and that Taliban has not cut off their ties with other terrorist networks including Al-Qaida yet.”

“A Taliban commander, Emran Hanzalah, and (a) few other fighters were killed,” said Vahidullah Jumah Zada, a spokesperson for the governor of Ghazni province.

Another official told VOA it is not usual to catch glimpses of foreigners who appear to be under Taliban protection.

“Such kind of people are seen a lot in Qarah Bagh, Andar and Giru districts,” said Esmatullah Jamoradwal, a member of Ghazni’s Provincial Council. “They speak Urdu, Arabic and other languages.”

“The Taliban do not let the local people see them closely and it is clear that foreign fighters are a lot amongst them,” he added.

Some United Nations counterterror officials have warned the U.S. is underestimating al-Qaida’s strength in Afghanistan.

A U.N. report issued this past July warned the group “is covertly active in 12 Afghan provinces,” adding it likely commands 400 to 600 fighters.”

The report said AQIS is believed to have up to another 200 fighters at its disposal, many providing support to the Taliban.