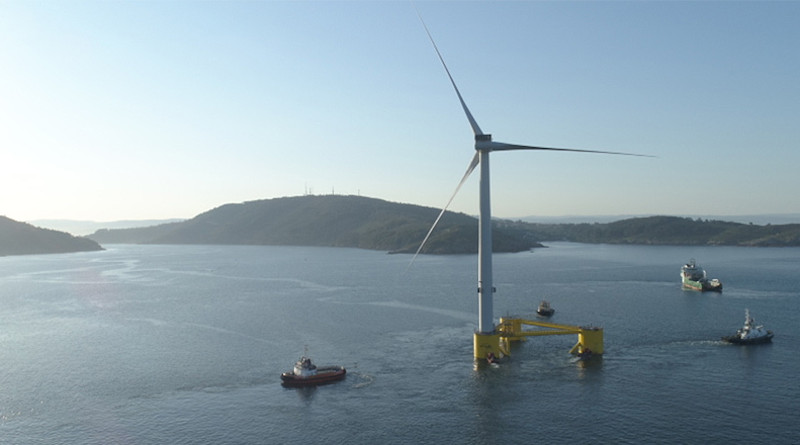 The WindFloat Atlantic project is taking one of the final steps towards becoming fully operational. The last of the three pre-assembled wind turbine platforms making up the project has left the Port of Ferrol, heading for its final destination 20 km off the coast of Portugal at Viana do Castelo, in a journey that will take three days.

This operation will be completed by hooking up this last unit to the pre-laid mooring system and connecting it to the rest of the offshore wind farm. This third platform will be installed next to the other two units, which are already up and running and supplying energy to the Portuguese electricity grid.

Transporting each of the three WindFloat Atlantic floating structures is a milestone in itself, as it sidesteps the need for towing craft designed specifically for this process and makes it possible for the project to be replicated elsewhere.

The floating structure – measuring 30 m high and with a 50 m distance between each of its columns – can support the world’s largest commercially available wind turbines, of 8.4 MW production capacity each, on a floating structure. Once all three platforms making up the wind farm are installed, with their 25 MW of production capacity they will be able to generate enough energy to supply the equivalent of 60,000 users each year. WindFloat Atlantic could save almost 1.1 million tons of CO2.

The project is led by the Windplus, comprising EDP Renewables (54.4%), Engie (25%), Repsol (19.4%) and Principle Power Inc. (1.2%). The facility has three wind turbines mounted on floating platforms which are anchored with chains to the seabed at a depth of 100 m. The project uses WindFloat ® technology that minimises the environmental impact and facilitates access to untapped wind resources in deep waters.

The platforms have been built jointly by the two Iberian countries: two of them were manufactured at the shipyards in Setúbal (Portugal), while the third was constructed in Avilés and Fene (Spain).

This initiative has had the support from public and private institutions, encouraging companies that are leaders in their respective markets to take part in the project; while the Government of Portugal, European Commission and the European Investment Bank have provided financial support.

The companies that have made this project possible include, in addition to Principle Power, the joint venture between Navantia/Windar, the A- Silva Matos Group, Bourbon, the wind turbine supplier MHI Vestas and dynamic cable supplier JDR Cables.

WindFloat Atlantic project marks an important milestone for the industry as this is the first semi-submersible floating wind farm in the world.

Because it can be placed in very deep waters, WindFloat® can unlock energy resources in vast areas of the sea, addressing major societal challenges, such as the clean energy transition, energy security and climate change, whilst bringing jobs, economic growth and opportunities for sustainable investment.

The advantages of this technology include aptness for dry-dock assembly and towing without the need for specialized towing craft, as well as not having to rely on complex offshore operations associated with the installation of traditional bottom-fixed structures. These factors contribute towards driving down lifecycle costs and reducing risks.