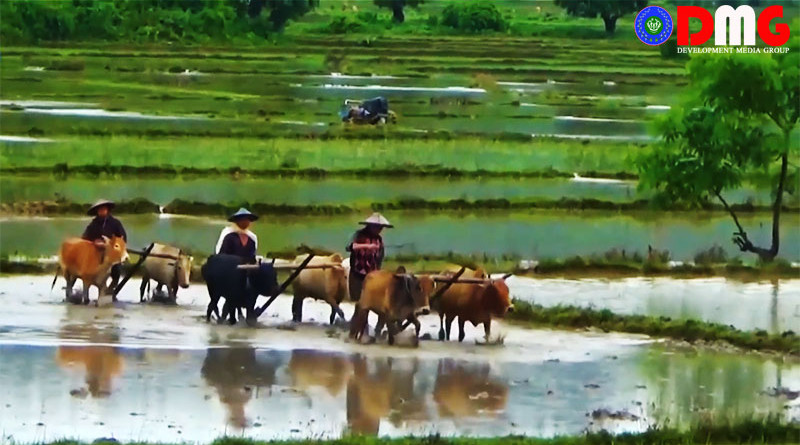 The Arakan State government plans to provide cultivation assistance for farmers in conflict-affected parts of the state who face difficulties getting their crops planted in time for the monsoon growing season, said U Kyaw Lwin, state minister for Agriculture, Livestock, Forestry and Mining.

“The draft plan has already been written to be able to grow paddy in time, especially in Sittwe and Mrauk-U districts. The government is ready to cooperate in the best interests of the region,” U Kyaw Lwin told the state legislature.

A committee focused on food security and ensuring paddy in Arakan State is cultivated to full potential has held talks with farmers and a host of other stakeholders. The Arakan State Rice and Paddy Traders’ Association, the Rice Millers Association, the Department of Agriculture, the Agricultural Mechanisation Department and the Myanmar Agricultural Development Bank have all been consulted with the aim of helping farmers, U Kyaw Lwin said.

A proposal urging the state government to prepare measures to ensure that farmers can grow paddy in time, which was submitted by U Aung Win, an Arakan State Hluttaw lawmaker from Myebon Township, was passed on May 21.

“I think the government will help farmers to some extent to be able to grow paddy in Mrauk-U and Kyauktaw townships by working with rice and paddy associations and industrialists from abroad,” U Aung Win said.

Amid ongoing fighting between the Tatmadaw and the Arakan Army in Arakan State, most of the region’s war-displaced people are farmers. They report struggling to grow paddy in time for the coming monsoon season as they have been displaced to camps far from their farmland; fear for their safety in active or latent conflict zones; have lost cattle; or seen the conflict disrupt agricultural supply chains.

U Tun Aung Thein, an Arakan State MP from Buthidaung Township, said aid from the government is essential for farmers.

“The government should provide help to farmers to be able to prepare their farmland with machines so that they can do cultivation in time,” he said.

Figures from the Arakan State Farmers’ Union show paddy could not be grown or harvested in 2019 on about 50,000 acres of farmland in war-affected areas.

The conflict between the Tatamadaw and the Arakan Army has displaced more than 164,000 people since late 2018, according to the Rakhine Ethnics Congress.