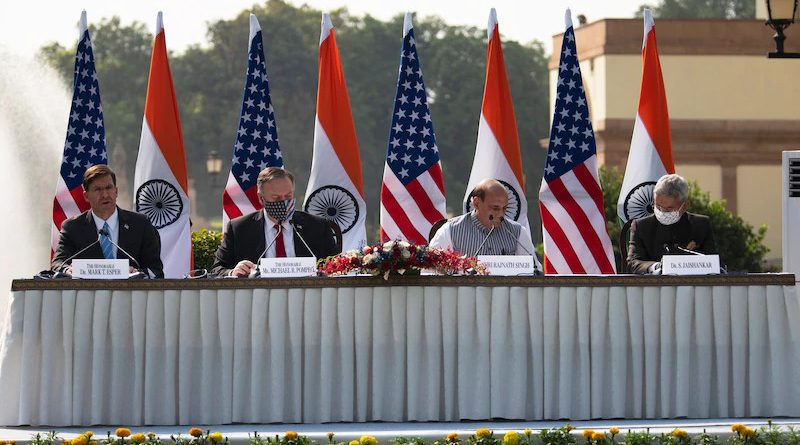 U.S. and Indian leaders made more progress today on building what Defense Secretary Dr. Mark T. Esper called “one of the most consequential relationships for the United States in this century.”

The meeting — held in the beautiful Edwin Lutyens-designed Hyderabad House — was a chance for the two nations to check the progress of previous agreements. It also was a chance for the leaders to continue to build the defense relationship across a range of areas. These areas include regional security cooperation, defense information sharing and defense sales, the secretary said.

“As the world confronts a global pandemic and growing security challenges, the United States-India partnership is more important than ever to ensure security, stability and prosperity to the region and the world,” Esper said at the conclusion of the talks.

It has only been 15 years since the first U.S.-India defense framework agreement. The defense ties are a pillar for the overall relationship between the United States and India.

Esper called the signing of the Basic Exchange and Cooperation Agreement important as it is the last of the foundational defense agreements between the two countries. “This enables greater geospatial information sharing between our two armed forces,” he said.

“Based on our shared values and common interests, we stand shoulder-to-shoulder in support of a free and open Indo-Pacific for all, particularly in light of increased aggression and destabilizing activities by China,” the secretary said.

China confronted India over the summer along its disputed border. Twenty Indian soldiers were killed.

Helping in the region includes bilateral defense cooperation in the Indian Ocean region, Southeast Asia and the broader Indo-Pacific. One example of this cooperation was the combined exercise by the Indian navy and the USS Nimitz carrier strike group in July. The two nations have also exchanged military liaisons to strengthen coordination and ties between military staffs.

The two nations are also working toward establishing new cyber and space dialogues to increase cooperation in domains where both countries face emerging threats, Esper said.

The four men also discussed engagement with like-minded nations, like Japan and Australia, to advance maritime security, humanitarian aid, disaster relief and other common interests across the region.

Esper praised India’s recent decision to include Australia in the upcoming Malabar naval exercise among Indian, American and Japanese forces. He said it reflects the acknowledgment of the importance of working multilaterally to address global challenges.

He said he would like to see this grow. “We have a lot of existing exercises right now,” the secretary said earlier in his trip. “We would like to multilateralize more things.”

The engagement between the Indian and U.S. militaries is strong and moving in the right direction, he said. Earlier in the trip, Esper said the navy-to-navy cooperation is fairly strong. We are looking to build more army-to-army and air force-to-air force opportunities,” he said.

U.S. and Indian defense trade and technology cooperation continues to grow. Esper noted that India acquired Apache and Seahawk helicopters earlier this year. “We look forward to advancing sales for other key defense platforms including fighter aircraft and unmanned aerial systems,” he said.

Global population and urbanization have boomed over the last few decades. With them came scores of new tall buildings, drones,