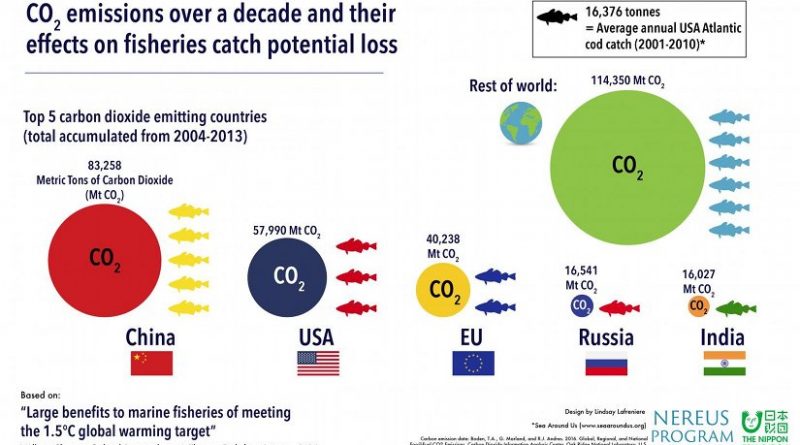 An infographic capturing carbon dioxide emissions over a decade and their effects on the catch potential of fisheries, by country. This material relates to a paper that appeared in the Dec.23, 2016, issue of Science, published by AAAS. The paper, by W.W.L. Cheung at The University of British Columbia in Vancouver, BC, Canada, and colleagues was titled, "Large benefits to marine fisheries of meeting the 1.5°C global warming target." Credit: Lindsay Lafreniere

Limiting temperature increases to 1.5°C over pre-industrial levels, as outlined in the Paris Agreement, will significantly minimize the impact of global warming on the catch potential of marine ecosystems and limit the turnover of harvested species, a new study reports.

The results highlight the urgent need for the global community to adhere to the recommended target of 1.5°C, since hitting temperature increases of 3.5°C could result in an additional three-fold decline in marine biomass for the fishing industry.

They applied their model to 892 species of exploited marine fishes and invertebrates.

Some regions will be hit significantly harder under the more dramatic warming condition, however; for example, the maximum catch potential may decrease as much as 47% in the Indo-Pacific region, which includes the Bay of Bengal, Gulf of Thailand, South China Sea, and Sulu-Celebes Sea.

Species turnover can also vary depending on global temperatures changes, where, under 3.5°C increase conditions, species turnover is projected to be about 22% of the average species richness observed between 1950 and 1969, compared to 8% if warming is restricted to 1.5°C.

The authors also highlight other region-specific projections. They note a few assumptions in their model, but emphasize that these, if anything, mean that their projections are an underestimation.