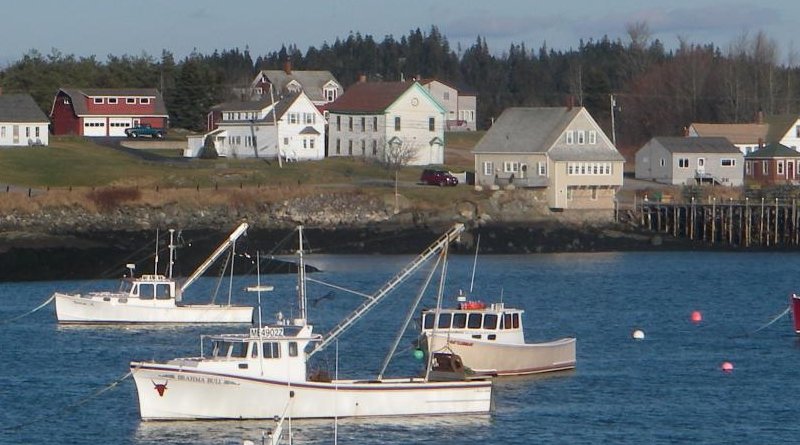 A new study by researchers at Woods Hole Oceanographic Institution (WHOI) found that New England’s historic lobster fishery may turn a higher profit by operating with less gear in the water and a shorter season. The findings could provide a path forward for the lobster fishing industry, which is under pressure to move away from traditional pot fishing that uses long vertical lines of rope known to entangle and kill endangered North Atlantic right whales and other protected species. The study was published this week in the journal Marine Policy.

“The story the data tells is optimistic,” says lead author Hannah Myers, a graduate student at the University of Alaska Fairbanks and a guest student at WHOI. “We know that taking rope out of the water column is the best way to protect whales, and that can likely be done in a way that could benefit fishers as well.”

American lobsters (Homarus americanus) found on the U.S. Atlantic coast bring in more revenue than any other fishery in the country, with a record high of more than $670 million in 2016. However, this doesn’t necessarily mean the fishery is operating efficiently, researchers say.

In order to maintain healthy fish stocks, many fisheries have a limited season, catch quotas and/or gear restrictions. These measures often reduce associated fishing costs, such as for bait and fuel, while also ensuring that the available fish are bigger and more abundant. Although the U.S. lobster fishery has some restrictions, the trap limit is very high and for the most part fishers can operate year-round.

By evaluating three different scenarios to understand the connection between lobster fishing effort and catch, the researchers found that tightening restrictions could make the industry more profitable in the long run.

In Massachusetts, where a three-month fishing closure was implemented in 2015 in Cape Cod Bay and surrounding areas where North Atlantic right whales come to feed each winter and spring, fishers caught significantly more lobster since the closure was implemented–particularly in the areas most affected by it.

Further north, Canadian fishers in the Gulf of Maine operate with far fewer traps and a six-month season, and catch about the same amount of lobster as their American counterparts with 7.5 times less fishing effort. In Maine, a 10 percent drop in the number of lobster traps fished in recent years has not prevented fishers from bringing in record landings.

Fishing gear entanglements are the most serious threat to the survival of endangered North Atlantic right whales, only about 400 of which are alive today. During peak lobster season, right whales must navigate through more than 900,000 endlines–ropes that connect surface buoys to traps on the seafloor–in waters off the northeastern U.S. coastline, which is an important area for their feeding and migratory habitat.

“Entanglements often cause chronic injury, stress, and even starvation if the animal doesn’t immediately drown,” says Michael Moore, a coauthor of the paper and director of WHOI’s Marine Mammal Center. “If the public could see the trauma these entangled animals endure, they would be extremely concerned.”

Understanding the economic implications that right whale protection measures may have is important to the lobster fishing industry and the many communities along New England’s coast that it supports, the researchers say. This study shows that reducing the amount of gear in the water or shortening the season does not necessarily mean fishers will catch less, and is in fact likely to benefit the industry in the long-term. This is especially important, given the economic devastation of the COVID-19 crisis.

Overall, their findings were consistent across the board: fishing with less gear and a shorter season corresponded with higher landings and higher profits.