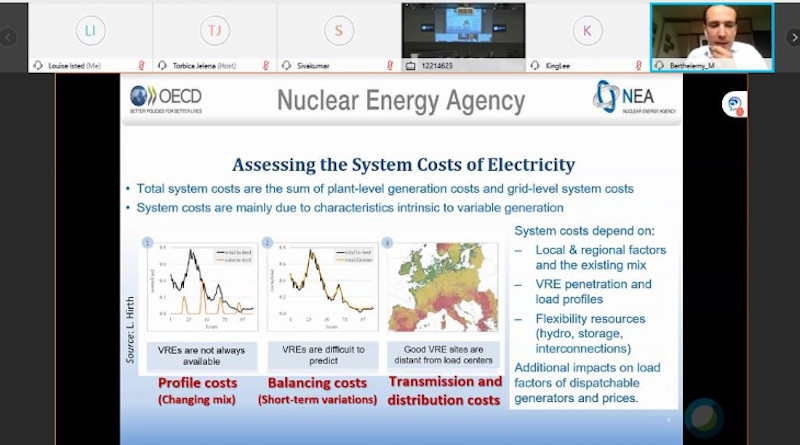 The falling costs of renewable energy, such as solar PV and wind, do not give governments an accurate picture of how to invest in low-carbon generation, Michel Berthélemy, a nuclear energy analyst at the OECD Nuclear Energy Agency (NEA), said last week during a webinar hosted by the Expert Group on Resource Management of the United Nations Economic Commission for Europe.

Berthélemy said the debate about financing clean energy transitions using renewables or nuclear was wrongly confined to the levelised cost of electricity, which is a measure of the average net present cost of electricity production for a generating plant over its lifetime.

“You often hear about the levelised cost of electricity, which is at the plant level, and in particular you hear that the cost of several renewable technologies have been fast decreasing over the last few years. This is true and is very good news for the climate. However, what you rarely hear about is the costs above the plant level, and in particular what we refer to as the system costs. Given the scale of the challenge with decarbonisation, we can’t just look at charts of the levelised costs,” Berthélemy said.

System costs consist of profile costs, balancing costs, and transmission and distribution costs. By definition they are system dependent and are influenced by: local and regional factors and the existing mix; variable renewable energy (VRE) penetration and load profiles; and flexibility resources (such as, hydro, storage and interconnections). System costs increase with the share of VRE penetration, which creates challenges for system management and residual demand because the available market for dispatchable generation becomes volatile and unpredictable.

“Another thing that is sometimes missing from the policy conversation is what we call the full costs,” Berthélemy said. “That means the broader environmental and social externalities related to the generation of different technologies, which are very important when we look at the decarbonisation pathways. To meet global energy and environmental requirements, all low-carbon technologies must be optimally applied, with all costs accurately allocated.”

He added: “A key result that also emerges from our work is that electricity markets must be modernised because existing market structures make investment in any unsubsidised low-carbon technology very difficult. Large deployment of VRE will occur around the world, but the contribution of VRE in each country will depend on the cost of available resources. To the degree that dispatchable energy is needed, nuclear can play a large role if it is economically compatible with evolving markets.”

Given that many of the nuclear power plants in operation today were built 30-40 years ago, policymakers should view investment in new nuclear as a fresh cycle for investment in large-scale infrastructure “for the public good”.

The nuclear industry is at “a critical juncture”, he said, with the completion of first-of-a-kind Generation III reactors. “The Gen III initial costs estimates are being driven by a low level of design maturity and the specific political context of announced budgets. The recent trend in projected costs reflects increasing design maturity lessons learned for post-FOAK projects. However, the gap between the two sets of projections has impacted the overall perceived investment risks and has the potential to impact public acceptance.”

The NEA has identified eight key priorities to unlock short-term nuclear construction cost reduction, he said. Between FOAK and post-FOAK, these are: design maturity; effective project management; regulation stability and predictability; and multi-unit and series effects. Between post-FOAK and nth-of-a-kind, they are: design optimisation; technology and process innovation; revisiting regulatory interactions; and the harmonisation of licensing codes and standards.

Building on the lessons learned from Gen III FOAK, governments have a window of opportunity, he said, for cost reductions in the early 2020s.

“A commitment to a standardised nuclear programme is the most promising route to realising cost reductions, which is already the case in Russia and China, but is not quite there in Western OECD countries,” he said.

“Governments can support cost reductions with SMRs and advanced reactors by ensuring timely licensing and construction of demonstrators that will be built in the late 2020s. These reactors will benefit from the supply chain capabilities of large Gen III projects. The governance framework is essential to support competitive new nuclear construction and transitional targeted financial support is currently required in Western OECD countries to deliver cost-competitive new nuclear, and address risk perceptions.”

Affordable financing is key to the economic performance of nuclear, he said, and there are a number of government support mechanisms that can be envisaged, from direct financial support (such as, equity debt, export credit agency funding and loan guarantees) and indirect financial support (such as, power purchasing agreements and regulated asset models). Often they are not exclusive and can be combined to effectively address the different construction and market risks faced by new-build projects.

Asked how markets could better reflect the costs of low-carbon generation, he said: “Electricity markets were liberalised in the 80s and early 90s at a time when we had already built most of today’s electricity infrastructures. Somehow we have forgotten that building an electricity system is building large infrastructure. This comes with very long cycles, but at some point you reach a new cycle and you have to invest massively in the system. We are about to reach that [point] in many Western countries, and certainly our electricity markets are not quite fit for that because we don’t have sufficient long-term price signals to support investment.”