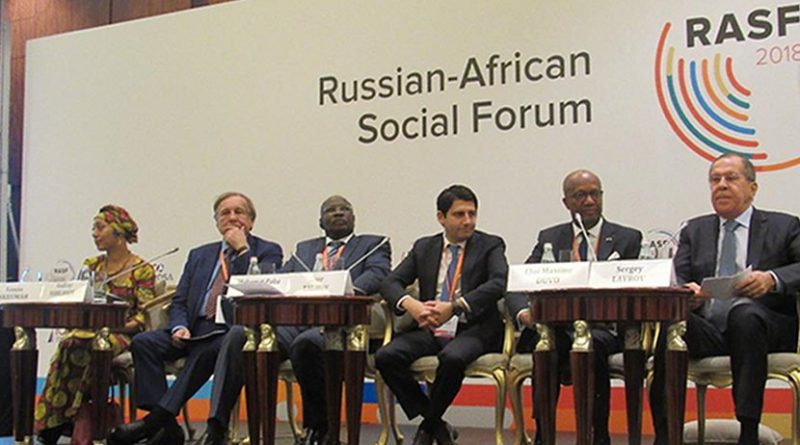 On October 22, the first Russian-African Social Forum, organised jointly by the World Association of Foreign Alumni of Russian Universities and African Business Initiative Union, was held in Moscow. More than 500 people participated: prominent Russian and African political and public officials, representatives of academic circles, the business community, and representatives of student and youth organisations.

The event provided a unique platform to exchange views on the current issues of relations between Russia and African countries, the current state of relations and the prospects for further development in the political, trade, economic, humanitarian and cultural fields, among others.

In his address as a keynote speaker, Foreign Minister Sergey Lavrov acknowledged the significance of the forum and stressed that it would be impossible to elevate the entire range of relations between Russia and African countries to an entirely new level unless the public at large takes the most energetic part in these efforts.

It is hard to overestimate the role of this in strengthening friendship, trust and mutual understanding between nations. For example, many Africans have discovered modern Russia for themselves while taking part in the 19th World Festival of Youth and Students in Sochi in the autumn of 2017 or while visiting Russia as fans during the 2018 FIFA World Cup.

Lavrov therefore considered absolutely necessary to maximise the potential of public, cultural and business diplomacy in the interests of strengthening and expanding the mutually beneficial ties between Russia and Africa.

“This is a wonderful opportunity to discuss topical issues of Russian-African cooperation and to outline specific and forward-looking aspects of cooperation and joint work,” said Lavrov.

As already known, Africa is an important partner for Russia, a participant in the emerging and sustainable polycentric architecture of the world order. Russia’s relations with African countries are valuable in their own right and should not be subject to the fluctuations on the international arena.

“We maintain regular contact at the highest and higher levels. Relations between our parliaments, as well as the exchanges between our respective ministries and departments, including, of course, foreign ministries, are expanding. Trade and economic exchanges are improving, although not at the pace we would like to see. Projects in the military-technical sector, as well as programmes in healthcare, education, and culture are underway,” according to the Foreign Minister.

He further noted that the positions of Russia and the overwhelming majority of African countries on the key issues are similar or very close. Both Russians and African friends are consistent supporters of strengthening democratic and just principles of international life, respect for the cultural diversity of the modern world, and the right of the people to determine the models and approaches to socioeconomic development.

Moscow is interested in close foreign policy coordination with its African partners in the UN and other multilateral venues. In particular, Russia supports further deepening of the BRICS-Africa dialogue.

It also attaches great importance to strengthening peace and security in the region that is the most important component in ensuring the sustainable and dynamic development of the African states and maintaining global and regional stability. As a permanent member of the United Nations’ Security Council, Russia continues to contribute to the development of a strategy for practical peacekeeping operations on the continent, while invariably adhering to the African solutions to African problems principle formulated by the Africans themselves.

As further steps to upgrade its cooperation with African countries in this era of keen competition and globalisation, Russia plans another opportunity to take stock of its current efforts, explore the possibilities and constraints in promoting concrete economic cooperation by holding a Russian-African inter-parliamentary conference and a business forum in the near future.

The first Russian-African inter-parliamentary conference and a special mini business forum under the theme “Russia – Africa: Horizons of Cooperation” was held on June 15, 2010. It included workshops and round tables by business representatives from Russia and African countries, and an exposition of the leading Russian enterprises and regions connected with development of economic cooperation with Africa.

The forthcoming conference and forum are within the context of preparing for the first Russia-Africa Summit, the importance of which President Vladimir Putin stressed during the 10th Anniversary BRICS Summit in Johannesburg in July.