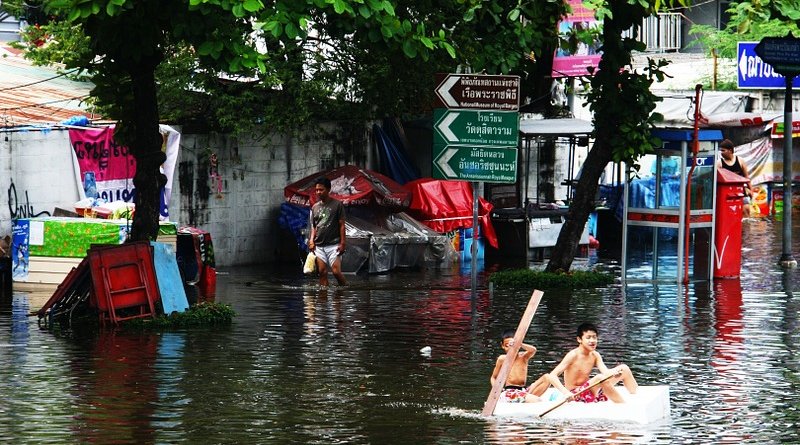 Over the past year, growing environmental threats in Asia have had much to do with water—most importantly rising seas driven by global warming.

Southeast Asia is proving to be particularly vulnerable.

New studies show that climate change and rising sea levels will threaten the lives of tens of millions of people and much of the wildlife in East Asia sooner than had originally been expected.

A recent study referred to by some as a “Doomsday Report” suggests that rising sea levels could flood three times more land than previously predicted.

In Southeast Asia, if the study prepared by a United Nations Intergovernmental Panel on Climate Change (IPCC) issued in late September 2019 proves accurate, parts of Ho Chi Minh City and Bangkok could be underwater by 2050.

Some scientists caution that these could be “worst case scenarios.”

But nonetheless, millions of people in Vietnam’s Mekong Delta could be forced to flee coastal areas.

The Mekong, Southeast Asia’s longest river, is where everything may go wrong due to the impact of man-made dams, rising sea levels, deforestation, and droughts that alternate with heavy rainfall. And all of this is exacerbated by climate change.

In the meantime, contrary to what might seem common sense, some experts say that due to a combination of these factors the Mekong may someday run dry.

According to scientists, the Mekong’s banks will be increasingly threatened by the loss of sediment now held back by upstream hydropower dams in China and Laos as well as by salt intrusions caused by the rising South China Sea.

Mangrove trees, which once played a vital role in the Mekong Delta in protecting the river banks and rice fields from salt intrusions, have disappeared in some areas.

Mangrove forests consist of small trees that thrive in saline water. In Vietnam, they not only guard against salt intrusions into farm land in the southernmost part of the Mekong Delta but also provide protection for a variety of wildlife.

Bu the Delta still suffers from an ill-advised attempt to expand rice production by the new Communist rulers of Vietnam when they came to power in the spring of 1975. In order to grow more rice, they encouraged the destruction of the mangrove swamps which had acted as a buffer to protect farm land from sea-driven salt.

The impact of ice melting in the Arctic

A main source of flooding in places in Southeast Asia is global warming causing the ice to melt in the Arctic and Antarctic regions. Ocean currents carry the rising seas more than 6,000 miles from the poles to reach cities such as Bangkok and Ho Chi Minh City in Southeast Asia.

In its September issue, the National Geographic magazine explains how the Arctic tundra is thawing in a cover story by Susan Goldberg titled “The Arctic is heating up.”

Goldberg reports that the thawing of the vast, nearly level, treeless plains of the Arctic known as tundra will speed up global warming.

“The unexpectedly rapid collapse of ice-rich permafrost, or permanently frozen subsoil” in the Arctic, Goldberg says, “could pump billions of additional tons of methane and carbon dioxide into the atmosphere every year—a threat that has yet to be fully accounted for in climate models.”

Scientists have found that permafrost that once thawed a few inches a year can now thaw up to 10 feet within days or weeks, “creating wetlands in once frozen regions and accelerating emissions from up to 1,600 gigabytes of carbon still locked underground.”

Fires, once considered rare in the Arctic, are now becoming more common as a warming climate melts the region. When permafrost thaws near a hillside or a stream or river, it can trigger a landslide, thus accelerating the thawing.

Arctic lakes once filled with ice also have begun to melt, allowing microbes to feed on organic material, which releases greenhouse gases.

In short, this sounds like a slow-moving, but accelerating catastrophe of which many around the world are still barely aware.

Gradual increases in the temperature of the earth’s atmosphere are attributed to a “greenhouse effect” caused by increased levels of carbon dioxide and other pollutants. Greenhouse gases collect in the atmosphere and absorb sunlight and solar radiation. Normally, the radiation escapes into space, but now the pollutants can last for years in the atmosphere, trap the heat, and cause the planet to get hotter.

According to The Economist magazine, China was the source of about 27 percent of global greenhouse gas emissions in 2017. But China, the magazine says, has been reluctant to curb emissions unless the United States moves first.

Meanwhile, on the website GlobalAsia, Matthew A. Shapiro cites atmospheric scientists who report that as much as 70 percent of Japan and Korea’s air pollution originates in China.

China’s far-ranging Belt and Road Initiative (BRI), designed to establish land and sea links with nearly 70 nations at a potential cost of $1 trillion, has brought warnings from scientists and environments regarding the environmental impact of its various infrastructure projects.

Following numerous complaints, China’s President Xi Jinping vowed in the spring of 2019 to make the BRI environmentally friendly, but the experts are still waiting for measures to be taken to implement his pledge.

Finally, as noted in previous commentaries, plastic trash piling up in the world’s oceans is causing the death of a number of marine species. Ever since China stopped buying trash for recycling, the U.S., European nations, and Southeast Asian nations have been scrambling to find the best ways of disposing of their plastic trash.

When it comes to the rising tides, people in both Thailand and Vietnam appear to be aware that more water is coming.

But several friends in Bangkok and Ho Chi Minh City recently said via email that the “water problem” isn’t getting the high-level attention that it deserves from Thai and Vietnamese government leaders.

One friend in Bangkok joked that some city dwellers might soon be living on houseboats, with Chinese manufacturers ready to supply them for around $10,000 each.

While this commentary has focused on Southeast Asia, it’s obvious that rising seas will have a huge impact in many parts of the world.

As The Japan Times noted in an editorial published in November 2019, the people hardest hit by rising sea levels will be the millions who live on small islands in the Pacific and Indian Oceans that are only a meter or two above sea level. They may also be among those least able to cope.

To end this commentary on at least one positive note, let’s return to the subject of those threatened mangrove trees that were mentioned earlier.

The website Smithsonian Ocean says that one shouldn’t underestimate the ability of mangroves in many locations to prevail.

In a report on mangrove trees around the world, the Smithsonian says that “mangroves are survivors.”

With their roots submerged in water, it says, mangroves thrive in hot, muddy, salty water conditions that would kill most plants.”

How do they do it? “Through a filtration system that keeps out much of the salt and a complex root system that holds the mangroves upright in the shifting sediments where land and water meet.”

And, the Smithsonian says, “as scientists are discovering, mangrove swamps are extremely important to our own wellbeing and to the health of the planet.”

But the Smithsonian ends with this question: “Will the mangroves be able to survive the impact of human activities?”

By Dr Farah Hegazi* To many, the coronavirus disease 2019 (COVID-19) pandemic came as a surprise. It has placed enormous

Impact Of COVID-19 On Rice Farmers In Southeast Asia – Analysis