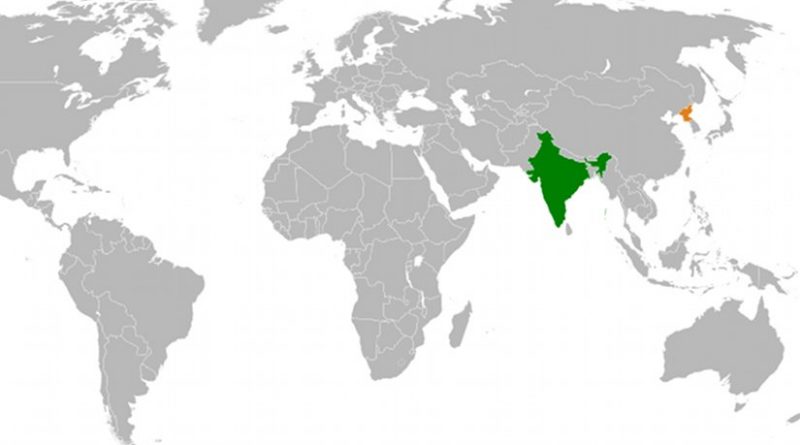 On April 13-14, 2015, North Korea’s foreign minister Ri Su Yong paid a very rare visit to New Delhi and had a meeting with his Indian counterpart Sushma Swaraj. This was the first visit by North Korean foreign minister to India in the last 25 years. India responded positively to Yong’s request for supply of wheat and other grains. North Korea’s positive relations with China and Pakistan were major impediments in its relations with India. Especially, transfer of nuclear technology between Pakistan and North Korea during 1990’s was a cause of concern for New Delhi. On September 9, 2015, India’s Ministry of External Affairs (MEA) nominated Minister of State for Home Affairs Kiren Rijiju to participate in an event celebrating North Korean Independence Day at their embassy in New Delhi. India has indicated that there are some positive developments in its bilateral relations with Pyongyang and that it is willing to play a role in the Korean peninsula. We have to understand these developments through the lens of major geopolitical changes on the global level and India’s domestic requirements.

During the Korean crisis in 1950, the then Indian Prime Minister Jawaharlal Nehru mediated between China and United States. Due to China’s ever increasing influence over North Korea, India took a back seat from active diplomacy in this region. India and North Korea had established embassies in 1973 but their diplomatic engagement was reduced to mere formality. In 2011, when North Korea faced crop failure, India sent emergency food supplies and $1 million under United Nations World Food Program. However, bilateral relations did not go beyond this. In 2012, no Indian officer from Foreign Service was ready to take up the position of ambassador to North Korea. India has sent the most experienced stenographer of MEA, Ajay Kumar Sharma to represent as ambassador, whose previous diplomatic experience was as a counsellor in Fiji. It seems in last three years he infused positive sentiments in India’s relations with North Korea.

Instability in the Korean Peninsula may trigger tensions beyond the Asia-Pacific. North Korea is considered a pariah state and suspicions around its intentions never seem to die down. In fact, for its long-time supporter China too, the over-ambitious North Korean nuclear programme has become a headache. Besides, China wants to enlarge its opportunities and looking for lucrative market in South Korea. This has not been received well by North Korea and the feeling of betrayal is on the rise. Presence of Rijiju, who hails from Arunachal Pradesh, at the event hoisted to celebrate Independence Day hints that India wants to take advantage of the growing rift between North Korea and China.

Since the dawn of the 21st century, India has taken keen interest in the geopolitics of the Asia-Pacific region. To consolidate its position in this region, Modi government has given fillip to ‘Act East’ policy. It is reported that Yong also requested India to widen its focus and consider North Korea under its ‘Act East’ policy. India is keen to seize this rare opportunity.

It is believed that Yong discussed issues of nuclear programme and regional stability with Swaraj and conveyed to her the North Korean view point. All important powers in the world have already expressed concerns about nuclear program. In the past, India was not a part of the six party (North and South Korea, US, China, Russia and Japan) talks held to discuss North Korea’s nuclear program. However, those talks were fruitless and North Korea is not willing to discuss this issue on any international forum. In the last few years, India’s presence in this region has significantly increased. South Korea and Japan are important trading partners of India. If Yong has really communicated about the nuclear program to India, then it should consider forwarding this information to all the interested stakeholders. India’s likely entry may generate prospects for discussion on North Korean Nuclear program. Many experts and diplomats have expressed that recent developments signify that India-North Korea relations may undergo dramatic changes. It is important to note that Rijiju said bilateral ties were “going to change.” The US has welcomed growing ties between India and North Korea. For them, India is at the linchpin of its Asia’s pivot policy. South Korea has recognized Indian view point and not indicated any alarming signals. To balance between both Koreas, India sent its railway minister Suresh Prabhu to Seoul.

Recently BBC declared that it will soon start a service focusing on North Korea. BBC’s announcement shows that world is desperate to reach out to Pyongyang. Due to many international economic sanctions against it, North Korea is yet to become a part of the global economy. North Korea has vast reserves of minerals and rare earth elements (REEs). Till now, China is its largest partner in minerals and other resources. North Korea wants to reduce its dependence on China and is in search of new options. They are looking towards Vietnam and Magnolia for the same purpose. North Korea feels that they can enter into Indian market, thanks to its resources and hence may have extended hand of friendship. India also wants to fulfill its dream of ‘Digital India’ and for that it’s electronic and IT industries have huge requirements of REEs and North Korea is one of the alternatives.

This new found love for North Korea in western capitals is hidden in these reserves of REEs.

India’s overtures to North Korea should be contextualized in its willingness to play the role of a leading power rather than balancing power in the Asia-Pacific. Obviously there will be many obstacles on India’s path to this goal. China took note of foreign minister Yong’s India visit and Rijiju’s attendance during its Independence Day celebrations. Myanmar freed itself from over comprehensive Chinese influence. It is moving on path of democratization. China doesn’t want to repeat same history in North Korea and will try everything to keep it under its influence. Next month, Chinese think tank is organizing a talk to push North Korea for discussion. Officials from six parties are invited and Chinese foreign minister will attend the talk. If India really wants to be part of active diplomacy in the region then it has take both the Koreas, US, Japan and Russia into confidence.

Recently, the South Korean ambassador to India Lee Joon-Gyu noted that India with its democratic set-up and policy of neutrality can play a significant role in the process of re-unification of both Koreas. The border issue of the 38 parallel line is a very complex one and India needs to craft its policy very carefully. By reaching out to North Korea, India took a very courageous step; it will test India’s leadership qualities. If India succeeds in proving its positive orientation on the Korean issue, it will enhance India’s stature on the world’s stage.

*Aniket Bhavthankar is a Research Associate at the Society for Policy Studies. He can be reached at [email protected]