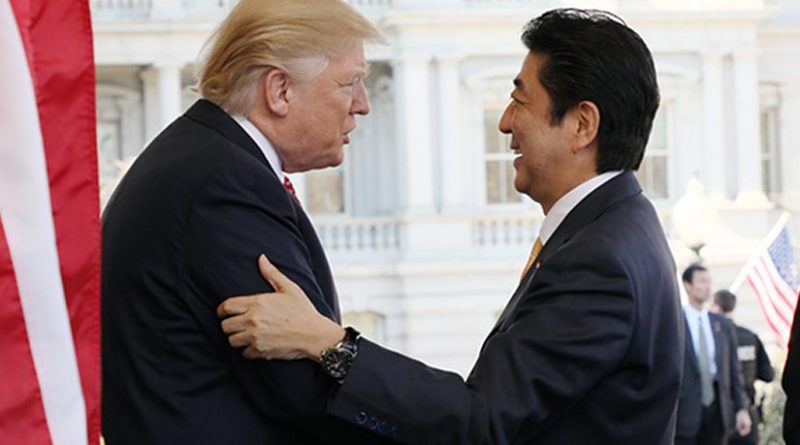 Though Japan-US relations have experienced some turbulence during the Presidency of Donald Trump with his focus on ‘America First’ policy, it is undeniable that the security aspect of the ties remains the lynchpin of the relationship. Trump has also been pressuring Japan to bear greater security burden for providing protection by deploying over 60,000 marines in Japanese bases. The nuclear umbrella is another key aspect in the bilateral relationship.

In the economic front, Trump threatened to increase tariff with focus on the automobile sector. Some of the contending issues were addressed when Japanese Prime Minister Abe Shinzo signed some key bilateral trade agreement with Trump on September 25, 2019 in New York during the United Nations General Assembly. The provisions of the deal are being interpreted differently in both the countries.

The following is the gist of the bilateral trade agreement. 1) Japan to eliminate or reduce tariff on $7.2 billion worth of US food and agricultural products; 2) Japan to reduce or eliminate tariffs to around the same level in the Trans-Pacific Partnership pact, of which Washington was a signatory, for US beef, pork, wheat, same dairy products and wine. The United States withdrew from the TPP under Trump. 3) The United States to increase its low-tariff free quota of up to 70,000 tons a year as it had originally agreed in the TPP. 4) The United States to increase its low-tariff quota for Japanese beef from the current 200 tons per year; the United States to maintain its current 2.5 percent tariff on Japanese cars and auto parts; and Japan to be exempted from being slapped with higher auto tariffs on national security grounds.

While Japanese government welcomed the trade pact, automakers urged more help and urged government officials to do more to support the key industry and the business as the auto tariff remained unchanged. The trade pact covered agricultural, industrial and digital trade. Japanese auto industry has been a main US target of blame, and industry officials were hoping to see auto tariffs eliminated, but Japan could only keep them at 2.5% and a US promise of no more for now.

Trump’s ire is because the US has a huge trade deficit against Japan and therefore Trump had threatened higher tariffs and other measures. In order to address to some of these issues, negotiations started in 2018 after Trump complained to Japan about this. The auto industry was not pleased the way pact was negotiated. Citing harsh business environment, Toyota Motor Corp. President Akio Toyoda who also heads the Japan Automobile Manufacturers Association met Japan’s trade minister Isshu Sugawara and top officials and said: “The auto industry already faces extremely difficult challenges amid rising Japanese yen, possible impact from the upcoming sales tax increase and other uncertainties.” He urged the government to understand the severe situation and “provide further support to help the auto industry to strengthen its competitiveness and grow as a strategic industry”. Sugawara, however, feels that the deal would help assure free and fair trade between the nations and promote favourable environment in the area of autos and auto parts between the two countries.

It may be recalled that Japan, the world’s third-largest economy, was the target of Trump since pulling out of the TPP trade deal in 2017, preferring to forge bilateral trade deals. According to the US figure, the chronic trade imbalance had ballooned to $67.6 billion in 2018, which Trump wants to correct.

Therefore, Trump sought the deal to reduce its chronic trade deficit with Japan, demanding greater market access for American beef, pork, wheat and dairy products. American farmers had been put at a disadvantage in the Japanese market as recent trade agreements, including the revised 11-member Trans-Pacific Partnership that involves countries such as Australia and Canada, lowered Japan’s tariffs on imports from member countries.

Though the two sides reached a basic agreement in late August, autos remained a major point of contention. Japan worries Trump might slap new tariffs on its automobiles, which make up a significant amount of its exports to the US. Japan also has pushed to eliminate the current 2.5% auto and auto parts tariff. According to Abe, he asked Trump and won his reassurance that the pact does not allow additional auto tariffs.

The reaction of the US Commerce Chamber was both good and bad. At one level, it hailed the trade deal but also wanted more. It also wanted a “comprehensive” deal covering services and regulatory barriers. While admitting that the deal shall spur economic growth and boost sales on both sides of the Pacific, Myron Brilliant, executive vice president of the chamber, expected more. The Chamber urged the administration to hold fast to its commitment to achieve a comprehensive, high-standard trade agreement with Japan that addresses the full range of trade priorities, including services, intellectual property protection, and regulatory barriers to trade.

Viewed objectively, the agreement represents a victory for Trump and demonstration of his “America First” policy agenda and sought to mollify US farmers bearing the brunt of Trump’s abrupt withdrawal from the TPP regional free trade pact. Japanese automakers should be happy to receive reprieve as Japan escaped the threat of higher auto tariffs that Trump can impose for national security reasons. But Tokyo failed to secure the scrapping of existing US levies on Japanese vehicles and auto parts, an agreement it had reached under the TPP.

The agreement will open new markets for $7.2 billion in American agricultural products. As per the deal, Japan’s current 38 per cent tariff on US beef will eventually be lowered to 9 per cent. Trump claimed this as a “huge victory” for American farmers, ranchers and growers. He promised to continue talks with Japan for a “comprehensive” deal that covers services trade as well.

The deal is interpreted as a win-win proposition for both the parties. A signed joint statement by the two leaders noted the agreement will “enhance bilateral trade in a robust, stable, and mutually beneficial manner between our nations”. After domestic procedures are completed, the accord is expected to enter into force on January 1.

American farmers who felt disadvantaged compared with foreign rivals due to multiparty frameworks, including the revised TPP free trade pact expect to benefit from reduced taxes on US beef and pork. Japanese consumers, meanwhile, would gain access to potentially cheaper US meat, wheat, wine and other products imported under the trade deal.

Under the agreement, Japan will immediately lower its tariff on US beef imports from 38.5 percent as is currently charged to 26.6 percent, setting the rate on par with Australia and other members of the revised TPP pact. The tariff on US beef imports will likely be further reduced in stages to 9 percent. Auto tariffs were in the spotlight during the bilateral negotiations as both nations have big car industries, with auto exports accounting for roughly a third of Japan’s trade with the US. Abe later confirmed with Trump that additional tariffs will not be imposed on Japanese cars and auto parts.

Abe has his own domestic constraints and cannot unilaterally concede to any demands made by Trump. Japan is constrained to commit to bigger concessions than those already made in existing free trade agreements, such as the revised 11-member TPP, as it fought to protect the interests of domestic farmers. Japan appears to have won US concessions on rice, a politically sensitive area for the country, offering no tariff-free quota for American rice.

A maximum 70,000 tons a year would have been set had the United States stayed in the original TPP that the administration of former President Barack Obama signed with Japan and 10 other regional economies in 2016. The new agreement also paves the way for more Japanese beef to enter the US market by removing the current low-tariff quota set at 200 tons a year. Japanese beef will be included in a larger quota combined with other nations and set at 65,000 tons annually. https://mainichi.jp/english/articles/20190926/p2g/00m/0bu/001000c

Japanese press was a bit critical of the deal reached by Abe with Trump. For example, Mainichi Japan observed in an editorial that the trade deal is not a ‘win-win’ thing as the contents of the deal are “far from a “win” for Japan. The editorial observed that Japan agreeing to reduce tariff on US beef and pork to around the same level as seen in the TPP pact, despite the US having withdrawn from it as a huge victory for America’s farmers, ranchers and growers as claimed by Trump. https://mainichi.jp/english/articles/20190927/p2a/00m/0na/007000c

The truism is that Trump is prioritizing his 2020 re-election bid as he knows that farms and automobile factories are concentrated in states that tend to sway elections. It was in September 2018 when negotiations began and Trump was in excessive hurry to clinch the deal in favour of the US. Given Trump’s unpredictability, the risk of additional tariffs is not completely eliminated.

Even Asahi Shimbun in an editorial expressed doubts over what it felt a one-sided trade deal. It refused to accept the claim made by Abe that it was a “win-win” deal. http://www.asahi.com/ajw/articles/AJ201909270021.html

It felt that Trump pressured Abe into accepting the rather lopsided deal as he played to the gallery of the farm lobby, his key support base, which could be crucial in his November 2020 re-election bid. There is a possibility that Trump may not remove the tariffs on Japanese cars and auto parts in accordance with World Trade Organization stipulations, thereby undermining the basic principle of free and fair trade.

Abe may be inferring from the joint statement that both nations shall refrain from taking measures against the spirit of the provisions of the agreement, which could have emboldened him to stress that Trump shall not impose additional tariffs on Japanese cars and related products but there is no guarantee that Trump will honour that spirit as a similar passage was included in a joint statement that both parties signed a year ago but the spirit was not honored and therefore the provisions in the new deal could be seen as far from reassuring. Abe shall have tough time in explaining the consequences of the trade deal to the Japanese people and business and farm community.

Home » Japan-US Trade Deal: Who Is The Winner? – Analysis