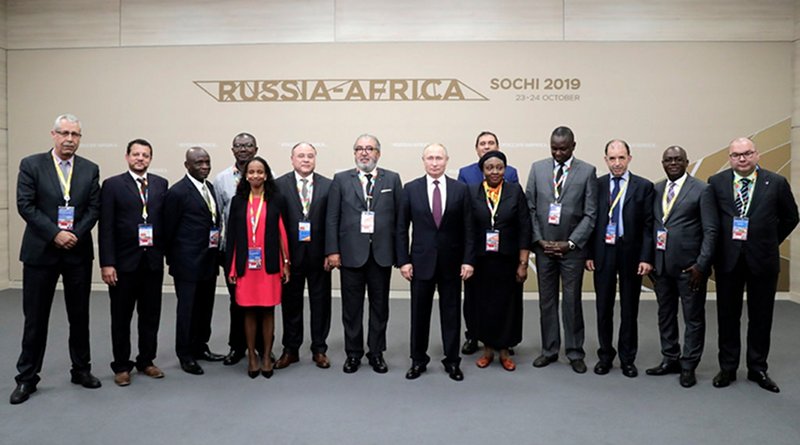 In an effort to get push its political and economic influence in Africa, Russia has begun identifying news outlets that could facilitate the distribution of its information products and contents (syndication of news reports) from Russian media organizations.

Since the collapse of the Soviet Union, this is the first significant step on media cooperation by official authorities to address the information gap between the two regions. The primary objectives are to promote its Russia’s image more positively, overturn the negative perceptions among the public and to counteract anti-Russian propaganda mostly by western and European media in Africa.

Russia seeks a new image in Africa. On the other hand, Russian media continues presenting Africa as a region of diseases, conflicts and dangerous for business. At least, Africa’s middle-class, approximately 380 million constitutes a huge consumer market, is more than Russia’s population of 150 million.

Indisputably, Africa also needs an excellent image among the Russian public. Russia experts and academics have consistently called for forging media cooperation as an instrument for promoting business opportunities and positive perception, and knowledge about post-Soviet achievements in Russia and developments in Africa.

In an emailed interview, Professor Irina Abramova, Director of the Institute for African Studies under the Russian Academy of Sciences, said in the eyes of the Russian political establishment and business community, Africa is still viewed as a continent of poverty, endless wars and epidemics, stuck in the pre-industrial stage of development, and surviving only thanks to international aid.

Meanwhile, there is a different Africa, she maintains, Africa with rapid economic growth, dynamic formation of democratic management systems, modern structures and institutions of a market economy, a major player in the market of natural and human resources, a key source of growth in global demands and profitable spheres of investment operations.

“The media should more actively inform Russians about the prospects for the development of the African continent, its history and culture. Unfortunately, the Russian man in the street does not know much about Africa,” the director explained.

“For Africans, so far Russia is associated with the Soviet Union, the majority of Africans still have very warm feelings towards Russia. In general, the Russian Federation in Africa, and Africa in the Russian Federation are very poorly represented in the media. It is necessary to organize a special media entirely dedicated to Russia-Africa,” Abramova said.

Honorary President of the Africa Institute of the Russian Academy of Sciences and Editor-in-Chief of the Asia and Africa Today magazine, Professor Alexei Vasilyev, has also stressed that Russia and Africa have to raise media work so that people of both regions get to know much about each other.

“Measures are needed to enable us to better understand each other. Africa is different. As journalists, we have to report not only diseases, demonstrations and murders, but also about real achievements and successes (of the African continent),” he said.

TASS Director General, Sergei Mikhailov, noted that without African states it’s impossible to cultivate international economic ties, stable development of international ties, and to build a stable and cohesive system of international security. Thus, cooperation between media outlets has to be one of the most active areas of developing ties with Africa.

Reports show that TASS plans to actively develop cooperation with its colleagues in Africa and give Africans a chance to familiarize themselves with developments in the world and on the African continent, which is different from most Western media. The Russian news agency plans to significantly increase the number of its bureaus in Sub-Saharan Africa, Mikhailov informed at the panel session themed “Russian-African Relations: The Role of Media” held in Sochi.

“We hope this will contribute to improving mutual understanding between Russian and African peoples. We want the events in Africa and vital issues of its development to again become top news,” he added.

The Russian Foreign Ministry supports the plan by the TASS news agency to open new offices across Africa in 2020 and urges the agency to go ahead with widening its African network, according to Russian Deputy Foreign Minister Mikhail Bogdanov. He further suggested Angola, Guinea, Tanzania and Madagascar among the potential host countries for future TASS offices.

Over the years, media and policy experts have noted that nearly 30 years after the Soviet, Russia has not encouraged African media in the Russian Federation. The Ministry of Foreign Affairs has largely ignored African media. South Africa, Morocco and Egypt (the Maghreb region) are closer in their relationship to Russia.

Information presented at the Sochi summit confirmed the experts’ observation. Some 300 news bureaus from 60 countries are operating in Russia, including 800 correspondents and 400 technical personnel, while Africa represented by just three bureaus: South Africa, Egypt and Morocco, the Deputy Director of the Russian Foreign Ministry’s Information and Press Department, Artem Kozhin said at the panel discussion.

According to him, this extremely low representation of African media hardly meets the level of dynamically developing relations. “We invite all interested parties to open news bureaus and expand media cooperation with Russia,” Kozhin said.

Some are not ready to spend money by bringing Africa media to Russia. “We understand that getting to Moscow costs quite a bit of money, and this may well be too expensive for African newsrooms,” Alexei Volin, Russia’s Deputy Minister for Communications and Mass Media, said before making the pitch. He further emphasized that information cooperation was developing not the way it should be.

The ministry has put forward proposals on expanding cooperation with Africa, including exchanging information with Russia’s state mass media, training courses for African journalists and trips of Russian specialists to Africa for training personnel.

According to various reports by Roscongress, the organizer of the first Russia-Africa Summit held in October, Russian officials have expressed readiness to collaborate with African media and would be at the forefront to highlight post-Soviet economic and cultural reality and shape the African perception about Russia. Senior media professionals on the African side are highly qualified and have appreciable professional experience in their employment.

For decades, a number of foreign countries have been cooperating with African media and NGOs to push their strategic policy and business interests. For example, the Forum on China-Africa Cooperation has fixed China-Africa Press Exchange Centre in Shanghai to encourage and promote exchange and visits between Chinese and African media.

Last May, China hosted the fifth Forum on China-Africa Media Cooperation. A joint statement on further deepening exchanges and cooperation was adopted.

Similarly, the United States, European Union, and Asian States support African media enormously in their information and education activity, and with regular publications of economic and business reports to create public business awareness in Africa. They have adequately collaborated with African partners in attracting business to Africa.

Nevertheless, Moscow plans to boost its presence on the continent in the next four to five years. Aware of the common responsibility, Russia and Africa have to continue coordinating efforts at implementing the documents adopted at the summit since this meets the desires and aspirations of Russia and Africa.

As explicitly outlined in the joint declaration, both Russia and Africa have to begin pursuing the targeted goals such as:

*facilitate the people-to-people contacts between Russia and African States using the potential of non-governmental organizations and various fora, including the youth ones.

*facilitate the opening of Russian and African mass media hubs in the respective territories of African States and the Russian Federation.

Ultimately, these could be achieved by building on the existing friendly ties, as well as on the rich experience of multifaceted and mutually beneficial cooperation that serves the collective interests between the Russia and Africa.