Outside a downtown Islamabad coffee shop that sells an assortment of French macaroons (cupcakes are so passé), I strike up a conversation with Omar Malik.

A 34-year-old who works for a private telecommunications company, Malik seems liberal. Liberal in the way Americans stumbling through Muslim-majority countries might find comforting. 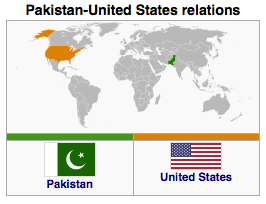 He’s dressed smartly in a collared shirt—with only the appropriate number of buttons unbuttoned. He sips a latte and speaks in flawless, albeit slightly accented, English.

When it comes to American politics, though, he isn’t technically “liberal” —at least as far as U.S. political categories go.

“Republicans have historically always been better for Pakistan than Democrats,” Malik says matter-of-factly. “In terms of the relations that we have had, I think Bush was a much better president than Obama or Clinton was.”

He leans back in his lawn chair when I inquire further. This is not what I expected to hear from a man outside a posh cafe on a Saturday night, but he continues, “In terms of foreign policy, in terms of [not] giving preference to India over Pakistan, the Republicans have been much more balanced,” Malik says.

I remind him of how, when pressed during the presidential debate on foreign policy, Mitt Romney said he’d continue President Obama’s policy of using drones to target terrorist enclaves in Pakistan.

But Malik is resolute. He chalks Romney’s assertion up to campaign rhetoric. The sort of tough-on-terror talk, he says knowingly, that Obama also ran on four years ago.

Pakistan has long been seen by American analysts as a “wildcard” state—a sort of trick card that either appears as a Queen of Hearts or a Joker depending on when, and for how long, you look.

It’s a trick ordinary Pakistanis—who would probably just as readily fill the streets to protest America as they would to claim a visa if the United States decided to offer up them up for free—can play just as well. Nearly three-fourths of Pakistanis polled said they see the United States as an “enemy.” That’s up from 64 percent just three years ago.

As if to say “if you can’t beat ’em, join ’em,” another recent poll found that 43 percent of Pakistanis claimed they should have the right to vote in U.S. elections, a number topped only by people in Kenya, China, India, and Cameroon.

“Pakistanis should be given the right to vote,” says Rahat Khan, a 27-year-old who manages supply orders at a construction company in Islamabad. He adds completely earnestly, “After all, all of the decisions made about Pakistan are made in America.”

Khan even goes so far as to say that Pakistan should be made the “53rd state”—although he’ll likely have to brush up on his geography should he ever decide to actually apply for U.S. citizenship and cast a ballot in American elections.

If he could vote, Khan says, he’d cast a vote for Obama. But there’s one issue that he can’t get behind. “Being a patriotic Pakistani,” Khan insists, “I must say that drone attacks should be stopped.”

Like many Pakistanis, Khan sees the use of drones as an affront to his country’s sovereignty. The continuing attacks on sites the United States identifies as terrorist enclaves in the tribal areas are approved by only a small number of elite Pakistanis. He says the unmanned assaults kill more innocent people than the terrorists they target.

The vitriolic issue of drone strikes is compounded by a number of other incidents that have stoked Pakistani anger at America.

In January 2011, CIA contractor Raymond Davis shot and killed two Pakistani men in the city of Lahore. To make matters worse, a car coming to aid Davis from the U.S. consulate killed a man in the street before speeding off down the wrong side of the road. Although “blood money” was paid to the victims’ families, the incident spurred a public outcry over the evident impunity for Americans who had committed murder.

Then, last November, a U.S. attack on a military outpost near the Afghanistan border killed 24 Pakistani soldiers, leading Pakistan to close NATO supply routes into Afghanistan. The passages remained closed for months.

And of course there was the unannounced raid in which U.S. Navy SEALS killed Osama bin Laden four months ago, which Pakistanis largely believe to be either offensive or fictitious.

Add up these incidents—along with the anger over the hokey film trailer defaming the Prophet Mohammad that inflamed the rest of the Islamic world—and it’s easy to come up with Obama’s incredibly low approval rating in Pakistan. Still, it is surprising that Pakistanis would see Obama on par with former President George W. Bush, whom many across the world still disapprove of for starting two wars on feeble foundations.

The poll, which was conducted by the Pew Global Attitudes Project, found that Pakistan was the only country of the 15 polled where ratings for Obama were no better than those maintained by former President George W. Bush.

Thirteen percent of Pakistanis polled said they would vote for Obama if they could, over a mere 9 percent who say they would support Romney. But the more telling statistic might be the 47 percent who believe that neither candidate would change U.S. policy.

Beenish Ahmed is a freelance journalist. She is a former NPR Kroc Fellow and received an MPhil in Modern South Asian Studies from the University of Cambridge through a Fulbright Scholarship to the United Kingdom.