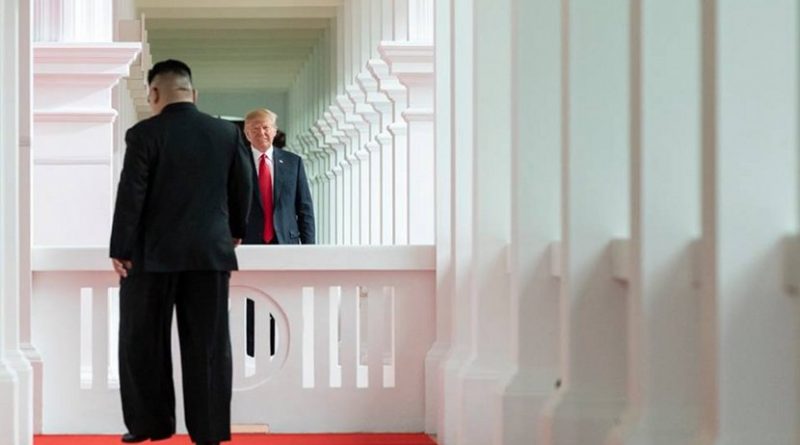 By Catherine Jones and Alex Brunner

In the first year of Donald Trump’s presidency (2017), as tweets of little rocket man and ‘dotard’ were exchanged and nuclear weapons continued to be tested in North Korea, it looked like the world was entering a new age of US-North Korea policy, a clear move away from strategic patience towards more forthright action. However, despite the US being ‘Locked and Loaded’ to strike at North Korea, the three years since 2017 have been hallmarked by a lack of aggression from either the US or North Korea and instead the two summits in Vietnam and Singapore have promised much and delivered little substantive change. So, how should we evaluate President Trump’s policy towards North Korea?

It would be very easy – if a little lazy – to argue that President Trump’s approach to North Korea has been wholly unsuccessful. Similarly, it can be (and has been) claimed that Trump has achieved the most from his engagements with Kim Jong-un and given the most away. It seems possible to argue almost any position on this relationship and generate a plausible account with evidence.

In this piece we endeavour to explore two issues. First, what has happened in the US policy towards the DPRK and is this any different from the policies of previous presidencies. Second, what has the effect been on wider regional relations as a result of this policy. From these two issues we then provide an evaluation that the US has broadly pursued the policy of previous presidencies of strategic ambiguity, although the practices through which this has been achieved have touched at the diplomatic extremes. Although this policy may have been largely consistent, the destructive effects on other regional partners relations with each other and the US have been more seriously damaged.

In Trump’s remarks on President Barack Obama’s policy towards North Korea, he has characterised it as a failing policy of strategic patience, lambasting it as a ‘losing’ policy leading to the gradual nuclearisation of the DPRK. President Obama’s strategic patience policy advised US diplomatic engagement with the DPRK conditional on North Korea’s commitment to both denuclearisation and renewed consultation with Seoul for returning to the six party talks. Obama’s policy of strategic patience fit into a wider US policy that encompassed and affirmed regional alliances, through strategic ambiguity.

The concept of ambiguity is understood to provide reassurance to allies and restraint by adversaries by all because it is not clear where ‘red lines’ are, that could trigger military or diplomatic pressure. In the history of the US’ relationship with the region since the end of the fall of the USSR, the alternating type and depth of US engagement with the region has perpetually embedded this policy.

In looking at Trump’s actions towards North Korea, it is clear that oscillating engagement has not only happened between presidencies but within his four years – moving from reserved condemnation of the 2017 North Korea intercontinental missile launches via Executive Order 13810 to more hostile actions such as threatening North Korea with military action following the temporary cancellation of the Singapore summit in 2018.

Has this approach been successful? When evaluated against the objective of achieving a denuclearised North Korea – no, it has not been successful. But, when evaluated against this high bar criterion, it is not clear that it has achieved significantly less than other presidents. However, in achieving the same outcome (an absence of denuclearisation), Trump has given away more. For example, elevating the status and legitimacy of North Korea and Kim Jong-un by sharing a stage at the summits. So, it is not necessarily that the implementation of the policy has been less successful but rather that the costs have been higher.

September 3 2017: Pyongyang performs its sixth nuclear test, claiming it is a hydrogen bomb

August 7-11 2017: In a series of tweets, Trump responds to DPRK threats on the American naval base in Guam, saying the US is ‘Locked and Loaded‘ and the DPRK will be met with ‘Fire and Fury‘

May 2018: President Trump ends Singapore summit negotiations because of Kim Jong-un’s statements to Vice-President Pence; ahead of the summit cancellation, the DPRK returns three US Prisoners of War and demolishes nuclear testing site of Punggye-Ri

June 2018: Trump renews and attends the Singapore summit, signing an inexplicit agreement for denuclearisation of the peninsula

February 2019: The US-DPRK Hanoi bilateral summit takes place, but Trump leaves early after a disagreement regarding the scope of sanction reduction in return for dismantlement of Yongbyon, North Korea’s largest nuclear facility

The US speed of oscillation from offensive to engagement approaches also appears to have resulted in exacerbating already strained regional relations. As noted above, strategic ambiguity can be an important mechanism in alliance diplomacy, particularly in managing relations with allies. However, Northeast Asia’s complicated alliance structure (US-Japan and US-ROK, alongside Japan-ROK tensions) makes implementing this aspect of alliance diplomacy particularly complicated — especially in relation to North Korea.

During the current period of the Trump presidency, this has been made even more difficult. South Korea under Moon Jae-in and Japan under Shinzo Abe have had differing views of the best approach to deal with North Korea. Moon has clearly sought an engagement policy with North Korea — sometimes referred to as the new sunshine or ‘moonshine’ policy. Whereas, Abe preferred a more strident approach to dealing with the regime and stronger demands for denuclearisation.

The hard line adopted by Trump in 2017 appeared to be somewhat supported in Japan but met with scepticism in Seoul. Following the 2017 missile launches over Hokkaido, Prime Minister Abe indicated approval with Trump’s ambiguous response: “(President Trump) said all options are on the table…we regard this highly.” Prime Minister Abe was also determined to push Trump on the non-nuclear issue of Japanese abductees; however, beyond Trump addressing the issue at the 2019 Hanoi summit, little progress has been made on the matter.

Following the Singapore summit, President Moon sought to hold a trilateral meeting with Trump and Kim, however, the meeting did not go through and Moon received an unwelcome surprise when Trump offered Kim Jong-un the suspension US-ROK joint-military exercises. ROK was also caught off guard by Trump’s cancellation of the Singapore summit in May, and Moon scheduled an impromptu meeting to discuss resuming the summit with Kim Jong-un the next day.

As a result, oscillations in the US’ direct approach with North Korea, also has had the effect of seeming to swing between the positions of each ally, reducing the public/clear confidence both have in the likely US response to DPRK provocation, potentially increasing the tensions between ROK and Japan, and moving them further away from any prospect of achieving a common approach to DPRK. This ambiguity appears to be less than strategic.

In relation to China, the undulating picture has also connected with China’s ongoing policy of engagement (for instance after the Singapore summit) and also been in stark contrast to the US position (for example by seeking additional pressure on China to pressure the regime). Although, US pressure on China on a variety of issues – most prominently trade – has abandoned an engagement strategy in favour of explicit contests, the US approach to how China engages with North Korea has remained fairly constant i.e. the US wants China to act like the US and China has a different strategy.

How then can we evaluate President Trump’s current term in office in relation to North Korea? Well, despite the razzmatazz of summits and tweets, there is a remarkable consistency: North Korea has not denuclearised, it is still under sanctions, the US hasn’t gone to war against them, and there is a gradual increase in the nuclear and missile arsenal within the DPRK. In relation to its allies, the US’ policies regarding the DPRK has continued to reinforce strategic ambiguity. In relation to China, the US still does not approve of China’s relations with North Korea.

Will the change in Japanese Prime Minister or the possibility of a different US President change this? Maybe, but based on our assessment, change from the basic policy of strategic ambiguity is unlikely even though the tactics to achieve it could.