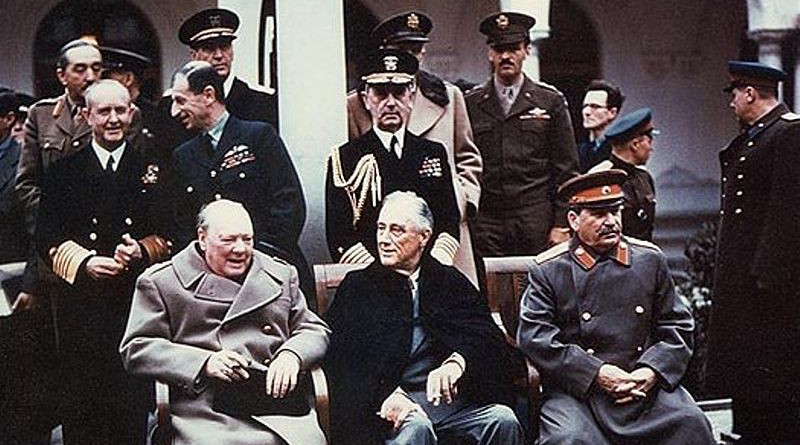 This year is the seventy-fifth anniversary of the end of World War II. One of the biggest frauds of the final stage of that war was the meeting at Yalta of Soviet dictator Joseph Stalin, British prime minister Winston Churchill, and President Franklin Roosevelt. Yalta has become a synonym for the abandonment of oppressed people and helped inspire the 1952 Republican campaign theme “20 years of treason.”

The American media uncorked a barrage of tributes to Roosevelt on the seventy-fifth anniversary of his death in April. CNN, for instance, trumpeted Roosevelt as “the wartime president who Trump should learn from.” But there was scant coverage of one of his greatest betrayals.

Roosevelt painted World War II as a crusade for democracy—hailing Stalin as a partner in liberation. From 1942 through 1945, the US government consistently deceived the American people about the character of the Soviet Union. Roosevelt praised Soviet Russia as one of the “freedom-loving nations” and stressed that Stalin is “thoroughly conversant with the provisions of our Constitution.” But as Rexford Tugwell, one of Roosevelt’s brain trusters and an open admirer of the Soviet system, groused, “The Constitution was a negative document, meant mostly to protect citizens from their government.” And when government is the personification of benevolence, no protection is needed.

Harold Ickes, one of Roosevelt’s top aides, proclaimed that communism was “the antithesis of Nazism” because it was based on a “belief in the control of the government, including the economic system, by the people themselves.” The fact that the Soviet regime had been the most oppressive government in the world in the 1930s was irrelevant, as far as Roosevelt was concerned. As Georgetown University professor Derek Leebaert, author of Magic and Mayhem, observed, “FDR remarked that most of what he knew about the world came from his stamp collection.”

The Roosevelt administration engineered a movie tribute to Stalin—Mission to Moscow—that was so slavish that Russian composer Dimitri Shostakovich observed that “no Soviet propaganda agency would dare to present such outrageous lies.” In his 1944 State of the Union address, Roosevelt denounced those Americans with “such suspicious souls—who feared that I have made ‘commitments’ for the future which might pledge this Nation to secret treaties” with Stalin at the summit of Allied leaders in Tehran the previous month. Roosevelt helped set the two-tier attack that permeated much of postwar American foreign policy—denouncing cynics while betraying foreigners whom the US government claimed to champion. (Someone should ask the Kurds if anything has changed on that score.)

Prior to the Yalta conference, Roosevelt confided to the US ambassador to Russia that he believed that if he gave Stalin “everything I possibly can and ask for nothing in return, noblesse oblige, he won’t try to annex anything and will work with me for a world of democracy and peace.” Stalin wanted assurances from Roosevelt and Churchill that millions of Soviet citizens who had been captured during the war by the Germans or who had abandoned the Soviet Union would be forcibly returned. After the war ended, Operation Keelhaul forcibly sent 2 million Soviets to certain death or long-term imprisonment in Siberia or elsewhere. Aleksandr Solzhenitsyn called Operation Keelhaul “the last secret” of World War II, and it was covered up or ignored by Western media until the 1970s. The fact is that those mass deaths that were facilitated by the US and British governments rarely rated even an asterisk by the media-beloved historians who tout the “Good War.”

In the final communiqué from Yalta, Roosevelt, along with Churchill and Stalin, declared that “a new situation has been created in Poland as a result of her complete liberation by the Red Army.” Liberation? Tell that to the marines. A few weeks later, on March 1, 1945, he gave a speech to Congress touting his triumph at Yalta. In it he declared, “The decision with respect to the boundaries of Poland was, frankly, a compromise….It will include, in the new, strong Poland, quite a large slice of what now is called Germany.” He agreed with Stalin at Yalta on moving the border of the Soviet Union far to the west—thereby effectively conscripting 11 million Poles as new Soviet Union citizens.

Poland was “compensated” with a huge swath of Germany, a simple cartographic revision that spurred vast human carnage. As author R.M. Douglas noted in his 2012 book Orderly and Humane: The Expulsion of the Germans after the Second World War (published by Yale University Press), the result was “the largest episode of forced migration, and perhaps the single greatest movement of population, in human history. Between 12 million and 14 million German-speaking civilians—the overwhelming majority of whom were women, old people, and children under 16—were forcibly ejected from their places of birth in Czechoslovakia, Hungary, Romania, Yugoslavia, and what are today the western districts of Poland.” At least half a million died as a result. George Orwell denounced the relocation as an “enormous crime” that was “equivalent to transplanting the entire population of Australia.” Philosopher Bertrand Russell protested, “Are mass deportations crimes when committed by our enemies during war and justifiable measures of social adjustment when carried out by our allies in time of peace?” Roosevelt signed those death warrants at Yalta. Freda Utley, the mother of the late publisher and author Jon Utley, did some of the first and best reporting on the vast suffering ensuing from the German expulsions (chapters from her book The High Cost of Vengeance are available at fredautley.com). (The US government approved similar brutal mass forcible transfers in former Yugoslavia during the Clinton administration.) But the German civilians killed after the war were simply another asterisk that could safely be ignored by Good War chroniclers.

Roosevelt boasted to Congress, “As the Allied armies have marched to military victory, they have liberated people whose liberties had been crushed by the Nazis for four long years.” At that point, he and the State Department knew that this was a total lie for areas that had fallen under the control of the Red Army, which was busy killing or deporting to Siberia any potential political opponents. Roosevelt claimed that the deal at Yalta was “the most hopeful agreement possible for a free, independent, and prosperous Polish people.” But he betrayed the exiled Polish government in London and signed off on Soviet-style elections with no international observers—effectively giving Stalin unlimited sway on choosing Poland’s rulers. Any illusions about Soviet benevolence toward Poland should have been banished when the Red Army massacred the Polish officer corps at Katyn Forest—an atrocity that the US government assiduously covered up (and blamed on the Nazis) during the war.

The Façade of Benevolence

In a private conversation at Yalta, Roosevelt assured Stalin that he was feeling “more bloodthirsty” than when they had previously met. Immediately after the Yalta conference concluded, the British and American air forces turned Dresden into an inferno, killing up to fifty thousand civilians. The Associated Press reported that “Allied air bosses” had adopted “deliberate terror bombing of great German population centers as a ruthless expedient to hasten Hitler’s doom.” Ravaging Dresden was intended to “‘add immeasurably’ to Roosevelt’s strength in negotiating with the Russians at the postwar peace table,” as Thomas Fleming noted in The New Dealers’ War. Vast numbers of dead women and children became simply one more poker chip. Shortly after the residents of Dresden were obliterated, Roosevelt pompously announced, “I know that there is not room enough on Earth for both German militarism and Christian decency.” Government censorship and intimidation helped minimize critical coverage of the civilian carnage resulting from US carpet-bombing of cities in both Germany and Japan.

Roosevelt told Congress that the Yalta Agreement “spells the end of the system of unilateral action and exclusive alliance and spheres of influence.” By the time he died the following month, he knew that democracy was doomed in any turf conquered by the Red Army. But the sham had been immensely politically profitable for Roosevelt, and his successors kept up much of the charade.

US government secrecy and propaganda efforts did their best to continue portraying World War II as the triumph of good over evil. If Americans had been told in early 1945 of the barbarities that Yalta had approved regarding captured Soviet soldiers and the brutal mass transfer of German women and children, much of the nation would have been aghast. War correspondent Ernie Pyle offered a far more honest assessment than did Roosevelt: “The war gets so complicated and confused in my mind; on especially sad days, it’s almost impossible to believe that anything is worth such mass slaughter and misery.”

In the decades after Yalta, presidents continued to invoke lofty goals to justify US military intervention in Vietnam, Afghanistan, Iraq, Libya, and Syria. In each case, massive secrecy and perennial lies were necessary to maintain a façade of benevolence. Americans have still not seen the secret files behind the harebrained, contradictory interventions in Syria from the George W. Bush administration onward. The only certainty is that, if we ever learn the full truth, plenty of politicians and other government officials will be revealed to be bigger scoundrels than suspected. Some of the orchestrators of mass misery might even be compelled to reduce their speaking fees.

“Presidents have lied so much to us about foreign policy that they’ve established almost a common-law right to do so,” George Washington University history professor Leo Ribuffo observed in 1998. Presidents have perennially used uplifting rhetoric to expunge their atrocities. On the seventy-fifth anniversary of Yalta, Americans have no reason to presume that presidents, top government officials, or much of the media are more trustworthy now than they were during the finale of the Good War. Have there been other Operation Keelhaul equivalents in recent years that Americans have not yet learned about? The fact that Yalta can now clearly be seen to have been a betrayal is another reason to be wary when pundits and talk show hosts jump on the bandwagon for the next killing spree abroad.

This article was originally published in the June 2020 edition of Future of Freedom.

*About the author: James Bovard is the author of ten books, including 2012’s Public Policy Hooligan, and 2006’s Attention Deficit Democracy. He has written for the New York Times, Wall Street Journal, Playboy, Washington Post, and many other publications.