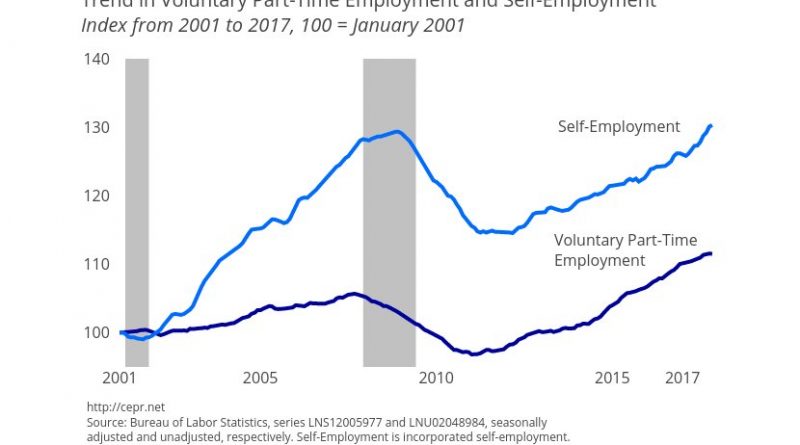 The Bureau of Labor Statistics reported somewhat stronger than expected job growth in November, with employers adding 228,000 jobs. This brought the average for the last three months to 170,000. The unemployment rate was unchanged at 4.1 percent.

In spite of these measures indicating a continued tightening of the labor market, there is still little evidence of any notable acceleration in wage growth. The annualized growth rate of wages for the last three months, compared with the prior three months, is 2.6 percent, virtually identical to the 2.5 percent rate of increase over the last year.

The relatively low percentage of unemployment due to workers voluntarily quitting their jobs (11.3 percent) suggests that workers still do not feel very confident about their job prospects. This number was 12.5 percent a year ago and had peaked at more than 15.0 percent in 2000.

The number of incorporated self-employed (a measure of people starting their own businesses) continues to run well ahead of last year’s level. The greater ability of people to start a business was one of the predicted effects of the Affordable Care Act (ACA), since they would no longer be dependent on employer-provided insurance. The number of incorporated self-employed is now almost 700,000 above its November 2013 level, an increase of 13 percent. Voluntary part-time employment has risen by 11.7 percent since the ACA took effect.

The job growth in the establishment survey was broadly distributed across sectors. Construction and manufacturing both showed strong gains in November, adding 24,000 and 31,000 jobs respectively. Construction employment is up by 184,000 over the last year, while manufacturing has gained 189,000 jobs. Interestingly, the average hourly wage in manufacturing reportedly fell four cents in November and stands just 1.9 percent above its year-ago level.

Professional and technical services added 23,500 jobs, with employment now 242,600 jobs above the year-ago level. The temp sector added 18,300 jobs, putting employment 116,300 above last year’s level. Health care added 29,500 jobs, in-line with its average growth of 25,300 jobs over the last year. Restaurants added 18,900 jobs last month. While this is in–line with its growth over the last year, it is slower than the growth rate of more than 30,000 a month from 2012 through 2014. This is consistent with a tightening labor market as workers now have better options than working at low-paying restaurant jobs.

On the whole, this is a positive report, but one that indicates that the labor market can still tighten further without any major concerns about inflation.