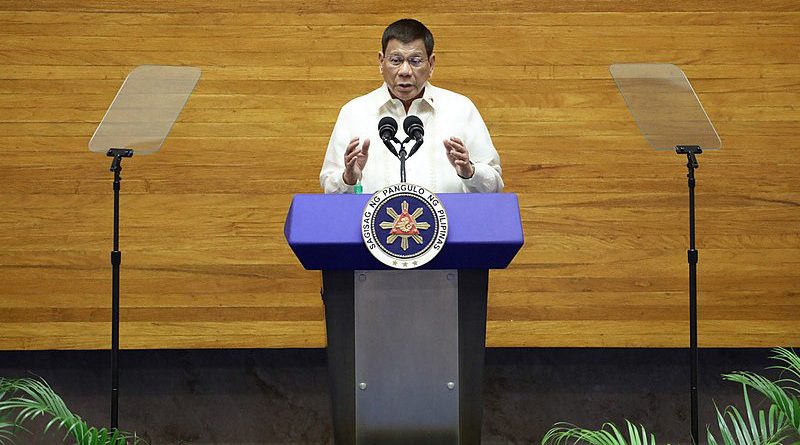 Philippine President Rodrigo Duterte recently delivered his final State of the Nation Address (SONA) for his six-year term. More than setting the legislative and policy agenda for the administration’s remaining tenure, Philippine SONAs are also venues for emphasizing government accomplishments with respect to promises made and progress achieved.

For the President’s final SONA lasting two hours and 46 minutes, the longest address of all the six he has delivered, the goal was to rationalize the success of the Duterte administration despite criticisms and realities on the ground. With the 2022 presidential elections just around the corner, Duterte’s SONA was also an opportunity to solidify positive discourses surrounding his leadership as he sets the agenda for his legacy to prevail beyond his administration.

The final SONA had the most extensive discussion on Philippine foreign policy compared to his five previous addresses. Duterte claimed that his administration has “vigorously pursued an independent foreign policy” that truly caters to Filipino interests. He has also reaffirmed the country’s commitment in being a responsible member of the international community as the country continues to work with all nations.

What is most striking in his final SONA are the discourses that rationalize the changes he has declared and adopted vis-à-vis the country’s relationships with pertinent major powers in the region—the United States and China. The ubiquity of these discourses, having been evident as well in previous SONAs of the President, provides insights on how populist leaders in small powers make sense of their position in the current regional order. Unpacking these discourses can also help us understand how they may serve as potential destabilizing forces against longstanding norms and institutions that help maintain the status quo.

SONA 2021 and beyond: Of failed alliances and true friendships

Like previous SONAs, Duterte’s 2021 address has presented very contrasting discourses surrounding the country’s relationship with China and the United States. In describing the Philippines’ relationship with the US, there has been a consistency of underscoring historical injustices, perceived arrogance, and unfulfilled promises to qualify antagonism towards the country’s treaty ally.

For instance, in explaining how an “independent foreign policy” has been successfully implemented during his administration, Duterte’s final SONA referenced the country’s resolve in standing up against Western governments. He proudly recalls sending waste exports back to Canada, and demanding the United States to return the Balangiga Bells, which were treated by the US as spoils of war during the Philippine-American War.

Referencing the story of the Balangiga Bells is not new. In his SONA in 2017, Duterte has officially demanded the return of these bells, which according to him, serve as “reminders of [Filipino] heroism…resisting… American colonizers.” The narrative of the Balangiga Bells represents Duterte’s perception of how Philippine foreign policy ought to be conducted vis-à-vis the United States– a small power standing up to a colonizer and their historical injustices.

In addition to historicizing victimhood and the United States’ unfair treatment towards the Philippines, Duterte has also highlighted the perceived lack of commitment and uncertain security guarantee stemming from the alliance. For the President, not only are the Americans guilty of historical crimes, but they have also failed as an ally especially in crucial moments when decisiveness could have made a difference. In his 2019 SONA, the President also lamented how the US has cancelled much needed arms for the 2017 Marawi Siege forcing him to turn to China for this request. Indeed, Duterte has consistently perceived the alliance through the lens of a resentful victim standing up against unfulfilled promises, arrogance, and historical crimes committed against their supposed good friend.

Good friends come and go. China is simply the contrast that he needed to complete his story, justify his antagonism towards the US, as well as his vision of how the world operates. In his latest SONA, Duterte specifically referred to Xi Jinping as a true friend. Beyond this consistent discourse of friendship he has built around China, such descriptions are intensified by perceptions of owing China a huge debt of gratitude (utang na loob), even going as far as saying that he may even lay his life for this ”friendship.”

Duterte has cited needed funding for infrastructure development (2017), military assistance during the Marawi Siege (2019), and guarantees for COVID-19 vaccines (2020, 2021) in previous SONAs in contextualizing genuine friendship between the Philippines and China. This preferential treatment and consistent positive reference to Chinese economic statecraft is strikingly different from the tropes of resentment surrounding his discourse of US-Philippine relations despite receiving comparable tangible benefits from the latter.

Despite the consistent loyalty he keeps on professing, the President has also been open in describing the decision to make friends with China as a product of strategic considerations than purely benign intentions. As his narrative goes, the Philippines is simply left with no choice but to be in China’s good graces rather than the alternative of maintaining a combative stance. Despite having the arbitral award as a significant leverage, the President chooses to interpret the situation through this oversimplified option between war and peace.

In a way, his 2021 SONA is no different from his previous addresses. He has continued to emphasize and construct a core opposition between an unfulfilled alliance with the US and a newfound friendship with China. Such discursive maneuvering justifies his descriptions of and perspectives on the Philippines’ position in relation to the two major powers. Using a simplified framework, Duterte often finds himself in the defensive as he tries to convince his audience of the logic behind his preferred foreign policy directions.

Ultimately, the President has heavily relied on asserting a position of victimhood for the Philippines when it comes to rationalizing his foreign policy preferences. Regardless of the actual severity of the perceived harm described, strategically asserting victimhood becomes a valuable source of statecraft to go against traditional sources of power, deflect responsibilities expected of his leadership, and assign blame to another actor or to circumstance.

With respect to the United States, his discourse recollects trauma from the Philippines’ colonial past, and questions the reliability of an American security guarantee. Based on his own storytelling of Philippine foreign policy, the exploited Philippines is justified in going against a perennial oppressor under his leadership.

With respect to China, victimhood takes a more subtle manifestation as warmer bilateral relations are often premised on claims of owing a debt of gratitude and sharing common interests.  But as Duterte has himself repeatedly claimed, the Philippines is left with no choice but to passively accede and consider friendship with China than the established partnership with the US.

Considering the dualisms of victimhood surrounding his descriptions of the Philippines’ relationship with the two major powers, Duterte has undeniably promoted discourses that have broad implications for how Filipinos ought to think about their identity and position in relation to these two powers. For one, genuine suffering under American colonialism has been consistently employed to  forge a new discourse that justifies pursuing friendship with China at the expense of contemporary national interests. At the same time, subsuming the country’s valid arbitral victory under purely geopolitical considerations promotes a narrative of a small power that is forever a passive victim of balance of power dynamics.

Come election season, the ideas behind these discourses forged in the last five years will undoubtedly influence how the country’s political elite envisions Philippine foreign policy. Consistently painting the country as victim to these powers despite relevant contexts and realities promotes a thinking of helplessness and dependency that may only serve to undermine Filipino national interests. Perhaps this can be President Duterte’s greatest foreign policy legacy.

Source: This piece was first published on the Philippine Strategic Forum.