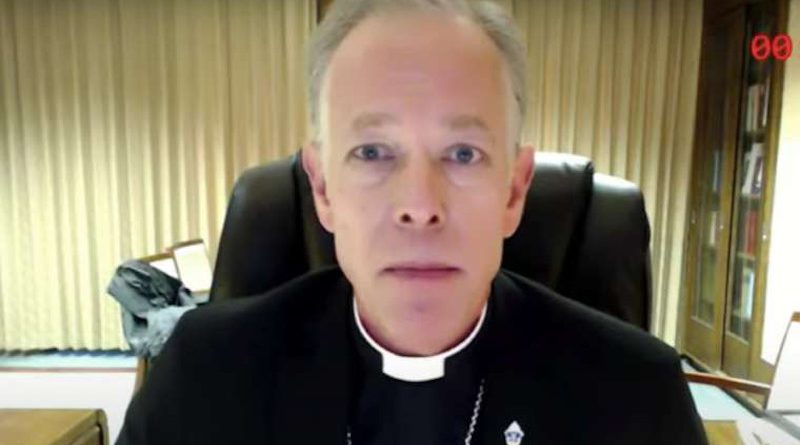 After a summer of mass protests and civil unrest, bishops from around the U.S. shared stories of confronting racism in their home dioceses at their annual fall meeting on Tuesday. The bishops spoke out to condemn racist rhetoric and said 2020 had shown how it leads to violence.

Bishop Shelton Fabre of Houma-Thibodaux, chair of the U.S. bishops’ ad hoc committee against racism, led the discussion, telling the bishops that none of them could have foreseen the tumultuous events of 2020 with the “numerous killings of African-Americans” sparking “worldwide peaceful demonstrations and protests” along with “violence in some places.” The bishop also highlighted the need for the continued work of the ad hoc committee, whose mandate was renewed by the bishops during the meeting.

After Fabre opened the conference to the virtual floor, other bishops rose to recount experiences from across the country, and to underline the link between discrimination and violence in their local communities.

Archbishop Alexander Sample of Portland, whose hometown has become the center for months of disturbances and protests, said that his city has become “quite a spectacle,” with nationally-reported riots and violence throughout the summer.

But, Sample insisted, the violence was a “hijacking, I think, of the righteous and lawful” peaceful protests for racial equality. “That’s not who we are,” he said, “we’re not a violent city.”

Sample and other bishops repeatedly warned that rhetoric demonizing immigrants or races can become deadly.

The archbishop said that the Asian-American population in his diocese has suffered from scapegoating over the new coronavirus pandemic. Blaming China for spreading the virus “flowed onto a lot of our Asian population here,” he said.

From Texas, Bishop Mark Seitz of El Paso said that the deadly mass shooting at a Wal Mart in his diocese last year, committed by a white nationalist, “really brought home the fact that white supremacy is not a harmless fringe ideology, but that it is a death-dealing ideology.”

“Words that denigrate immigrants and other people of color really feed into these ways of thinking,” he said.

How Catholics can partner with others in the community to oppose discriminaton was also discussed by the bishops, with the specific example of the Black Lives Matter Global Network being raised for discussion, in light of the group’s opposition to racism but its controversial policy positions on the family and sexuality.

Bishop Fabre told CNA in June that it is “appropriate” that Catholics “protest racial injustice,” and that the Black Lives Matter Global Network does align with Catholic teaching on the injustice of racism. However, he said, the national group has “a broad agenda covering many social issues, some of which are not in harmony with Catholic teaching.”

On Tuesday, Archbishop William Lori of Baltimore said he wrote an op-ed on explaining how “black lives matter” in Catholic Social Teaching, while Sample warned about Catholics aligning themselves with “simple catchphrases” and “movements,” saying that “we need to speak from our own tradition” on race.

The bishops’ discussion of racism, on the second day of their annual fall meeting, came just after the announcement that their ad hoc committee against racism will be renewed for another three-year period. The bishops voted overwhelmingly to reauthorize the committee, with 194 in favor, three voting against and one abstaining.

The committee was formed in 2017 after increasing racial tensions and an outburst of violence in Charlottesville, when a white nationalist attacked counter-protesters of a far-right gathering, killing three and injuring 19.

Since its formation, the committee has produced an award-winning children’s book on healing and reconciliation, as well as organizing a day of prayer and fasting in reparation for sins of racism this summer.

A year after its formation, the bishops’ conference issued their 2018 pastoral letter on racism, “Open Wide Our Hearts.”

Bishops on Tuesday said they have since held painful yet fruitful discussions and listening sessions on race in their own dioceses.

“Hearts are being changed, and we have seen the power of the Holy Spirit at work,” Bishop Fabre said of efforts to promote encounter and dialogue on racial reconciliation.

In Catholic parishes and other institutions, “there is unequivocally more thought, conversation” and deliberation on racism, Bishop Fabre said. “The work is hard. The work is slow. But the work is being done.”