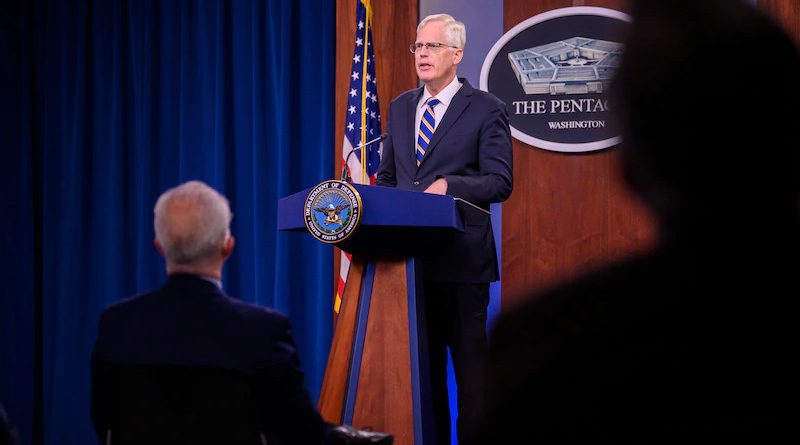 The United States will draw down forces in Afghanistan and Iraq by Jan. 15, 2021, Acting Defense Secretary Christopher C. Miller said today at the Pentagon.

Miller, who took over as acting secretary on Nov. 9, said the move was made with the full concurrence of military officials in the U.S. Central Command area and at the Pentagon. The decision is in keeping with President Donald J. Trump’s promise to get U.S. forces home from the “forever wars.”

A senior defense official speaking on background before the announcement said the president has been consistent about withdrawing forces from the countries. One precondition was that U.S. safety and security not be threatened by the actions. The senior defense official said that certain conditions in Iraq and Afghanistan had to be met, but the official declined to enumerate them.

The official said the U.S. forces left in both countries should be able to continue the mission with no degradation in capabilities.

Hundreds of thousands of U.S. service members and troops from partner nations have served in Afghanistan and Iraq. Many Americans served multiple tours. More than 6,900 Americans have been killed in these wars and more than 52,000 have been wounded. This does not count the almost 3,000 Americans killed in the terror strikes of Sept. 11, 2001, that began this. The al-Qaida terror group used Afghanistan as a planning, training and staging area for the strikes in New York, at the Pentagon, and in Pennsylvania.

“In light of these tremendous sacrifices, and with great humility and gratitude to those who came before us, I am formally announcing that we will implement President Trump’s orders to continue our repositioning of forces from those two countries,” Miller said. “This is consistent with our established plans and strategic objectives, supported by the American people, and does not equate to a change in policy or objectives.”

Miller said Trump’s decision is based on continuous engagement with his national security cabinet over the past several months. “We will execute this repositioning in a way that protects our fighting men and women, our partners in the intelligence community and diplomatic corps, and our superb allies that are critical to rebuilding Afghan and Iraqi security capabilities and civil society for lasting peace in troubled lands,” Miller said.

Miller said he has spoken to Afghan and Iraqi officials and NATO Secretary General Jens Stoltenberg.

The decision is not irreversible, Miller said. “If the forces of terror, instability, division and hate begin a deliberate campaign to disrupt our efforts, we stand ready to ally the capabilities required to thwart them,” Miller said.

Home » US To Draw Down Forces In Afghanistan, Iraq