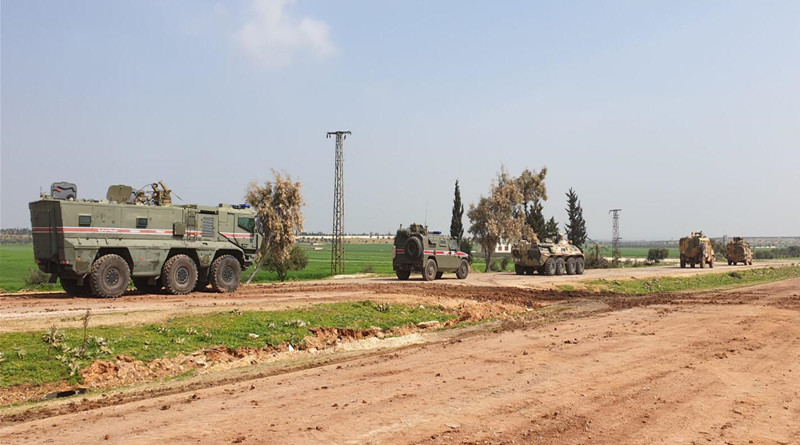 The first Russian-Turkish military patrol was carried out along the M4 highway in Syria’s Idlib province on Sunday, as was envisaged by the March 5 Vladimir Putin-Recep Tayyip Erdogan deal. Although the first joint convoy was carried out, its original route of about 80 kilometers was cut short to the approximately 18 kilometers between Tronba and Ariha due to security concerns, particularly the threat coming from Al-Qaeda-affiliated terrorists.

So-called civil opposition activist groups, together with armed militants, started to hold sit-ins and demonstrations along the highway to protest against the Russian presence in Idlib, as they do not recognize the new Moscow-Ankara agreement. Their main aim was to block the joint patrols. There are also plenty of reports now circulating in the media that, in addition to the sit-ins and demonstrations, the M4 has been blocked with walls of sand and sharp metal shrapnel to stop the patrols from moving west along the highway. Interestingly, Turkey is responsible for clearing these areas of extremists and creating conditions suitable for joint patrols, but Ankara seems reluctant to do so.

Following Sunday’s first joint convoy, the Russian Ministry of Defense said that Turkey had been given additional time to ensure the conditions for troops to take part in the joint patrols. Although the Russian and Turkish presidents managed to reach an agreement on Idlib, it looks increasingly likely that there will be quite serious issues in implementing it. There are a lot of questions remaining and no answers.

As part of the March 5 deal, the parties agreed to cease all military action along the line of contact in Idlib’s de-escalation zone. They also announced the plan to establish a 12-kilometer-wide security corridor along the M4 (6 kilometers to the north and 6 kilometers to the south of the road) and to launch the joint Russian-Turkish military patrols.

Basically, both countries managed to achieve their goals, although it looks like Moscow and Damascus got more. The strategic M5 highway, which connects Aleppo and Damascus and is essential for the country’s economic revival, is now under the Syrian government’s control and is open to traffic.

But plenty still remains unclear. Firstly, given the problems the first joint patrol experienced, how exactly will Russia and Turkey manage the security corridor? Presumably, they will need to terminate all terrorist groups that are active there. So how are they going to proceed with this, especially Turkey, given its not very successful experiences of the last two years? As the deal doesn’t specify how Moscow and Ankara will deal with terrorists in Idlib, it could be a major spoiler for the Russian-Turkish cooperation.

Secondly, what is the future of the Turkish observation posts that are located to the south of the M4 highway and are surrounded by the Syrian army’s forces? For now, the Turkish Defense Ministry says that its observation posts will remain where they are, meaning that, if Damascus continues its offensive in southern Idlib, it puts them under a greater risk of attack, which will negatively affect the entire agreement.

Also in doubt is whether Bashar Assad will get control of all areas to the south of the M4. According to the Putin-Erdogan deal, all fighting must stop along the line of contact, which is lower than the M4 road. As of last week, the Syrian army was continuing limited operations in southern and eastern Idlib, which may cause more tensions with Turkey and undermine the agreement.

The next uncertainty is when, if at all, the M4 highway will be reopened and be safe for traffic. This road connects not only Aleppo with Latakia, but also eastern and northeastern Syria with the coast. The reopening of this road is crucially important for Syria’s economic revival.

Finally, how will the Putin-Erdogan deal help to settle the refugee issue?

Therefore, there are a lot of questions surrounding this deal. However, it is still better than nothing.

The deal did demonstrate the ability of Russia and Turkey to handle such crises without sliding into uncontrolled escalation and chaos. In the end, neither Turkey nor Russia is ready to break ties with the other just because of Idlib. Moreover, the two need to continue their coordination in Syria, as Turkey still de facto occupies the northern part of Aleppo province and has a buffer zone east of the Euphrates. The Kurdish issue is also a key problem for Ankara, together with the Syrian refugees. Sooner or later, these questions will also have to be addressed, which will require dialog and cooperation between Moscow and Ankara.

In general, the updated Idlib deal is yet another temporary solution to the crisis in the province — another temporary status quo that will eventually be challenged. This is why the risk of another cycle of escalation remains. It is just a matter of time.

• Alexey Khlebnikov is an independent strategic risk consultant and a MENA expert at the Russian International Affairs Council (RIAC). He works as a consultant to various think tanks and institutions in Europe, the Middle East, Russia, and the US. Twitter: @AleksKhlebnikov