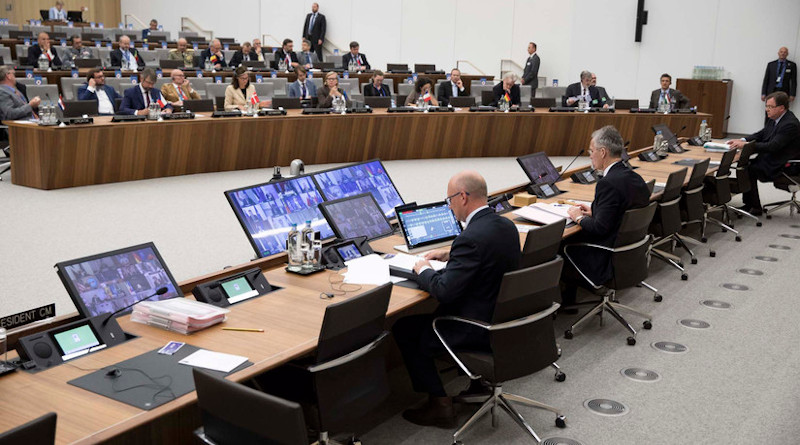 The NATO alliance is preparing to face traditional and nontraditional threats, looking to continue to deter Russia and to face a possible second wave of COVID-19.

“State and nonstate actors continue their attempts to destabilize, disrupt and divide allies,” the secretary general said during a news conference. “So NATO’s job is to remain ready to defend all allies against any threat.”

Russia continues its military actions in Ukraine, it continues to occupy Crimea, it sends troops to prop up the Assad regime in Syria, and now it is sending aircraft and personnel to Libya. Russia remains the greatest threat to the alliance, and the ministers discussed Russian efforts to subvert the alliance and build their military force. They specifically addressed Russia’s extensive and growing arsenal of nuclear-capable missiles and their implications for NATO’s security, Stoltenberg said.

In 2019, Russia deployed SSC-8 missiles, which led to the demise of the Intermediate-range Nuclear Forces Treaty. “The SSC-8 missiles are dual-capable, mobile and hard to detect,” Stoltenberg said. “They can reach European cities with little warning time, and they lower the threshold for the use of nuclear weapons.”

Russian President Vladimir Putin has said he is modernizing intercontinental ballistic missiles, and that Russia has fielded a hypersonic glide vehicle.

“Russia has tested its air-launched ballistic missile system, and is developing a nuclear-powered cruise missile,” the secretary general said. “We have also seen a pattern over many years of irresponsible Russian nuclear rhetoric, aimed at intimidating and threatening NATO allies. Russia’s behavior is destabilizing and dangerous.”

The defense ministers agreed to a balanced package of political and military elements, including strengthening the alliance integrated air and missile defense system. “We also agreed to strengthen our advanced conventional capabilities, and allies are investing in new platforms, including fifth generation fighter aircraft,” Stoltenberg said.

The alliance is adapting intelligence sharing arrangements and bulking up exercises, he added.

The ministers want negotiations on nuclear arms with all. Stoltenberg called on China, as a major military and nuclear power, to participate.

The alliance’s ministers also discussed the NATO missions in Iraq and Afghanistan and reiterated their strong commitment to Afghanistan’s long-term security. “This commitment is vital to ensuring the peace process continues to move forward,” Stoltenberg said. “To support the peace process, we are adjusting our presence in Afghanistan, and we will consider further adjustments in troop levels in close coordination with allies.”

Changes in Afghanistan are conditions-based, and Stoltenberg called on the Taliban “to live up to their commitments, take part in intra-Afghan negotiations and make real compromises for lasting peace.”

Iraqi security forces have made enormous strides, the secretary general said, but ISIS has tried to exploit the COVID-19 pandemic. “Today, allies reiterated their commitment to stepping up our efforts in Iraq, in full consultation with the Iraqi government and the global coalition,” he added.

Both Afghanistan and Iraq have requested NATO assistance in dealing with the COVID-19 pandemic, and both nations have received aid from NATO allies, including critical medical supplies. NATO defense ministers also approved a plan for the ongoing fight against COVID-19.

NATO leaders will continue to ensure “credible and effective deterrence and defense,” Stoltenberg said. “We have taken all the necessary measures to ensure our forces remain ready, vigilant and prepared to respond to any threat, because it is essential that this health crisis does not become a security crisis,” he added.

“Medical authorities around the world have warned that we could see a second wave in the pandemic, so NATO is preparing to provide strong support to civilian efforts if that happens,” the secretary general said.

The ministers agreed to a new operation plan to provide support to allies and partners. “We also agreed to establish a stockpile of medical equipment and supplies, and we agreed on a new fund, to enable us to quickly acquire medical supplies and services,” Stoltenberg said.

“Just as allies have supported one another, and our partners in the first wave of COVID-19, we stand ready to support each other should a second wave of the pandemic strike to reduce suffering, and to save lives,” he added.