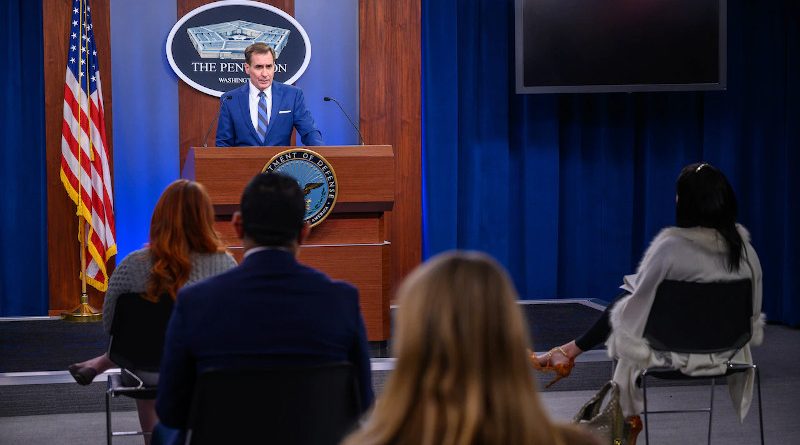 The crisis in Afghanistan remains fluid and dynamic and it is ever-changing, Pentagon Spokesman John F. Kirby told Pentagon reporters Wednesday in an operational update of U.S. military operations in that country.

The U.S. military footprint in Afghanistan is at about 4,500 troops on the ground in Kabul at Hamid Karzai International Airport, which they secured days ago. The operation to hold down the airport and evacuate civilians from Afghanistan is ongoing and a few hundred more troops might arrive today, the spokesman said.

The Kabul airport remains secure and open for flight operations; military flights are arriving and departing consistently, and there are limited commercial flight operations, in addition to some foreign contracted flights that are coming and going, he said.

That number includes about 1,300 Marines, who will continue to flow in from the 24th Marine Expeditionary Unit and the Special Marine Air-Ground Task Force Crisis Response, he noted, emphasizing that both pre-positioned units were forward deployed in the U.S. Central Command area of operations as part of their normal deployment. Secretary of Defense Lloyd J. Austin III wanted to ensure those Marines would be ready to go on short notice, Kirby said, adding that noncombatant evacuation operations support is something that “Marines are well-trained in and do well, so we’re glad to have them on the ground.”

Additionally, 18 C-17s have departed Kabul in the last 24 hours. “These flights have carried around 2,000 passengers, and I can confirm that 325 of those passengers are American citizens,” the spokesman said. “The remainder of the number includes Afghans and some NATO personnel.”

In the next 24 hours, the scheduled airlift numbers will be similar to the last 24 hours, he said, emphasizing that there are a number of factors that can influence flight operations and the circumstances can change.

Kirby said he couldn’t guarantee that the numbers of people on those planes will be the same, because some of the planes are still coming in loaded for equipment, and not all are empty C-17s with 300 seats on them. “There are different configurations on the planes,” he said.