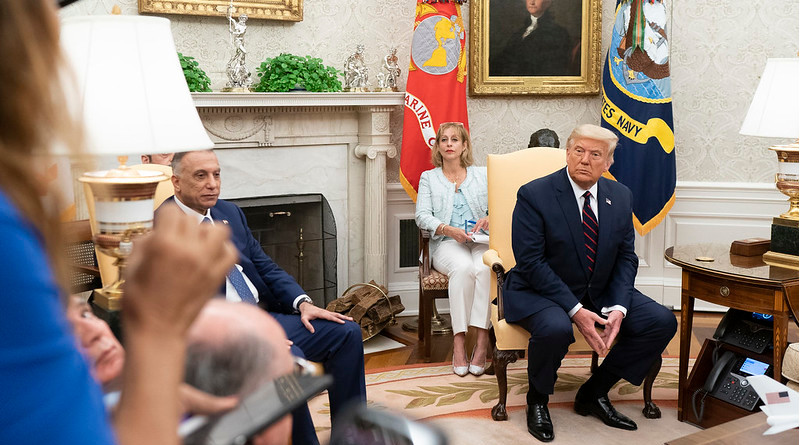 President Donald J. Trump talks and takes questions from members of the press during a bilateral meeting with Prime Minister Mustafa Al-Kadhimi of the Republic Iraq Thursday, Aug. 20, 2020, in the Oval Office of the White House. (Official White House Photo by Shealah Craighead)

US President Donald Trump on Thursday said US companies were involved in many prospects in Iraq’s oil business, as Iraqi Prime Minister Mustafa Al-Kadhimi declared his country open for American business and investment.

Trump told reporters ahead of a meeting with the Iraqi leader that the US military currently had very few troops left in Iraq, but that they would be there to help the country if neighboring Iran did anything.

President Trump and the prime minister of Iraq were meeting to discuss ways to confront Iranian aggression in the region, ongoing threats from Daesh sleeper cells and the president’s desire to shrink the US military’s footprint in the country, saying he was “looking forward” to when American troops no longer needed to be there.

There are more than 5,000 American troops in Iraq now and last month, top US general for the Middle East said he believed the US will keep a smaller but enduring presence in the country.

Marine Gen. Frank McKenzie, the commander of US Central Command, said after he met with Iraq’s new prime minister Al-Kadhimi, that he believes the Iraqis welcome the US and coalition troops, especially in the ongoing fight to keep Daesh fighters from taking hold of the country again.

“So at some point, we obviously will be gone,” Trump said alongside Al-Kadhimi at the White House, adding: “We’ve brought it down to a very, very low level. But we have been taking our troops out of Iraq fairly rapidly. And we look forward to the day when we don’t have to be there and hopefully Iraq can live their own lives and they can defend themselves,” the US president said.

Al-Kadhimi said that he was “grateful” for US support in the war against Daesh, which “strengthens our partnership for the best interest for our nation.”

Al-Kadhimi added that Turkish interference in Iraq was unacceptable, saying that these incursions were an attack on Iraq’s sovereignty and that Turkey continues its military operations regardless.

“We will not accept it … and Iraq’s constitution states that our lands will not be (open for confrontation),” Al-Kadhimi told reporters.

Secretary of State Mike Pompeo, who met with Iraq’s foreign minister Fuad Hussein on Wednesday, said the US was fully committed to helping Iraq regain and maintain security within its borders, adding that armed groups are not under the full control of Al-Kadhimi. He said those groups should be replaced by local police as soon as possible and that the US could and would help.

However, Al-Kadhimi told Pompeo that Iraq does not currently need direct military support on the ground, and that the levels of help would depend on the changing nature of the threat.

Regions in Iraq’s northern territory have been under threat from armed groups three years on from Baghdad’s declaration of victory over Daesh.

Pompeo and Iraq’s foreign minister expressed hope that as the security situation improves, there could be greater economic cooperation between the two countries, particularly in the energy sector.

On Wednesday, Energy Secretary Dan Brouillette announced energy agreements worth up to $8 billion between the Iraqi minsters of oil and electricity and five US companies — Honeywell, Baker Hughes, GE, Stellar and Chevron. Brouillette said US private investment will help Iraq’s energy sector and stressed a need for Iraq to reduce its dependence on energy from Iran.