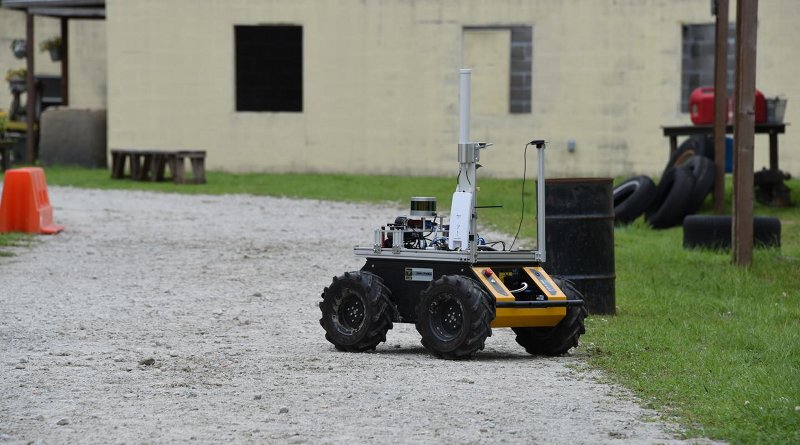 An Army-led research team developed new algorithms and filled in knowledge gaps about how robots contribute to teams and what robots know about their environment and teammates.

Dr. Kristin Schaefer-Lay, an engineer with the U.S. Army Combat Capabilities Development Command’s Army Research Laboratory, is part of a multidisciplinary team of reseachers from the Army, Carnegie Mellon University, University of Minnesota and the University of Central Florida — amongst others, who developed specific algorithms and novel artificial intelligence approaches to support the development of a shared context between team members through effective bidirectional communication.

A number of researchers and institutions have looked a smaller pieces of this problem set, but this team looked at a more holistic approach for how to develop and integrate different types of context related to environmental context, mission context and social context to advance human-autonomy teaming through advanced bidirectional communication capabilities.

The collaborative team seeks to identify critical scientific advances made by the Army’s Robotics Collaborative Technology Alliance, or RCTA, on techniques for developing and advancing context-driven artificial intelligence to support future human-autonomy teams.

Strategic investments in Army-led foundational research as part of the RCTA resulted in advanced science in four critical areas of ground combat robotics that effect the way U.S. Warfighters see, think, move and team. This research supports the Army Modernization Priority for the Next Generation Combat Vehicle by advancing science for integrating context-driven artificial intelligence within human-autonomy teams.

The researchers published their findings in the edition of the AI Magazine as part of an invited issue on AI and Context: “Integrating Context into Artificial Intelligence: Research from the Robotics Collaborative Technology Alliance.”

This article highlights advances in context-driven AI for human-robot teaming.

Avenues of research discussed include how context enables robots to fill in the gaps to make effective decisions more quickly, supports more robust behaviors, and augments robot communications to suit the needs of the team under a variety of environments and team organizations and across missions.

The article”s findings will be used to support the laboratory’s continued research in the Human-Autonomy Teaming Essential Research Program. In particular, this research will help to develop effective bidirectional communication methods and interventions for calibrating appropriate team trust and shared situation awareness in high risk, complex operations.

It is not enough to just develop new algorithms and approaches, Schaefer-Lay said, “but it is important to understand the impact these have on effective teaming across operations.”

The advancement of this research line will extend to include larger teams and crew station technologies that support the Next Generation Combat Vehicle, she said.