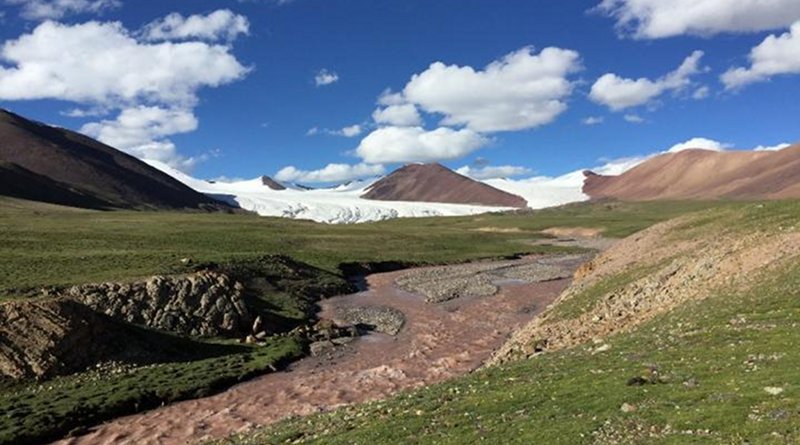 Meltwater runoff from the Dongkemadi Glacier on the Tibetan Plateau. CREDIT: Image by Dr. ZENG Chen

Sediment flux (SF) in the Tuotuo River on the central Tibetan Plateau (TP), considered the main headwater of the Yangtze River, has significantly increased over the past three decades, according to new research by scientists from the Institute of Tibetan Plateau Research of the Chinese Academy of Sciences (ITPCAS), China Agricultural University, National University of Singapore, and Utrecht University.

Sediment flux refers to the total amount of sediment passing through a given cross section per unit time. Increasing SF in the upper reaches of a river is often accompanied by intensifying soil erosion, land degradation, river channel siltation and reduced operating life of downstream reservoirs. It is an important indicator of major environmental changes with broad economic effects.

“Riverine sediment is not only an important pathway for nutrient and pollutant transport, but also a sensitive indicator of soil erosion and environmental changes in the river basin,” said Dr. ZHANG Fan, lead author of the study. ZHANG noted that four of eight rivers in the TP for which long-term monitoring data are available have shown significant increases of SF over the last five decades.

The researchers chose the Tuotuo River in order to better understand sediment transport changes in the TP and their underlying processes. Annual time series data on hydro-meteorological variables showed significant increases in air temperature, precipitation, ground temperature, river discharge, suspended sediment concentration (SSC) and SF for the period from 1986 to 2014. Mean values were appreciably higher during 1998-2014 period as compared with 1986-1997. This difference could potentially be attributed to the strong 1997 El Niño event.

The researchers said the increase in meltwater shown in the research is attributable more to warming than an increase in precipitation. They also said the increase in SSC mainly resulted from enhanced transport capacity and erosive power associated with precipitation and discharge. However, this increase was buffered by a decrease in sediment sources due to the shift in maximum monthly rainfall from June-July to July-August, since denser vegetation cover in July-August prevents soil erosion. In addition, increases in both discharge and SSC equally contributed to the increase of SF.

By offering further insights into the processes underlying recent SF changes in the Yangtze River headwater, this study provides guidance for water and soil management on the TP.