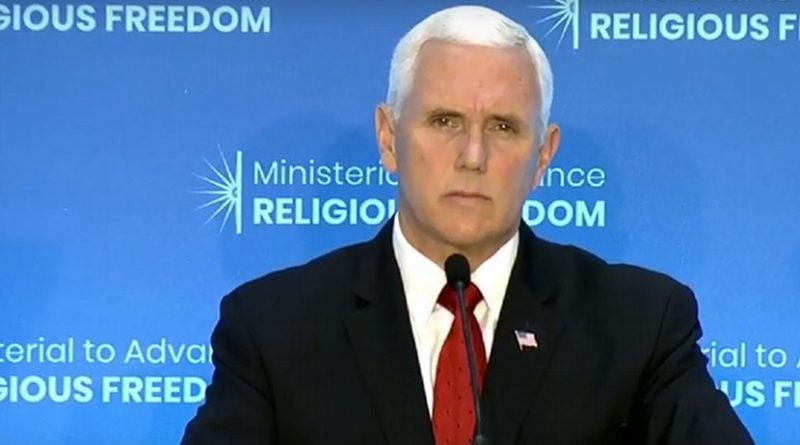 Organized atheists, unlike most Americans who are non-believers, are more often than not driven by hatred of religion and the faithful. Their impulses are totalitarian: they would ban all religious expression if they could. A classic case is Freedom From Religion Foundation (FFRF).

FFRF has gone ballistic because Vice President Mike Pence recently implored Americans to make donations to their church, even if they cannot attend during the coronavirus crisis.

The atheists said that no American public official “should lend the power and prestige of their office to a particular church or to religion in general.” They even accused Pence of being un-American. “Leveraging a global pandemic to drum up church donations is an egregious betrayal of the country’s founding principles in order to benefit religion.” The atheists added that Pence “should not further encourage Americans to give their money to those who least deserve it.”

Their reasoning is bankrupt. Here are four reasons why.

First, Pence was exercising two of his First Amendment rights: freedom of speech and freedom of religion (religious expression is a core constitutional right). Even vice presidents maintain those rights.

Second, Pence did not order anyone to give to their church or offer new tax incentives if they did. His terms were purely volitional.

Third, what Pence said not only did not betray America’s founding principles, it affirmed them. Every president in American history has made public appeals expressing the critical role that religion plays in society, especially during times of adversity. During the Civil War, Lincoln once told his secretary, “I have been driven many times upon my knees by the overwhelming conviction that I had nowhere else to go.” Similarly, William McKinley, struggling with his decision to seize the Philippines, said to a group of ministers, “I am not ashamed to tell you, gentlemen, that I went down on my knees and prayed Almighty God for light and guidance more than one night.”

Atheists like those at FFRF like to cite Jefferson as an example of a non-believing president who wanted an impregnable wall between church and state. They are badly educated.

When Jefferson was seen carrying a red prayer book, a skeptical citizen asked where he was going. “To church,” he replied. “Why, Mr. President, you don’t believe a word of it,” the citizen said. Jefferson replied, “I, as the chief magistrate of this nation, am bound to give it the sanction of my example.” Jefferson also awarded the Kaskaskias Indians $300 so they could build a Catholic church. And all Pence was doing was asking Americans to give to their church!

Fourth, it is risible to read atheists tell the faithful not to give to their church because it will go to “those who least deserve it.” Every study on charitable giving shows that atheists are the least generous and religious Americans are the most generous. From giving blood to providing food, clothing, and shelter to those in need, the churches, synagogues, mosques, and other houses of worship lead the way in donating goods and services to those in need.