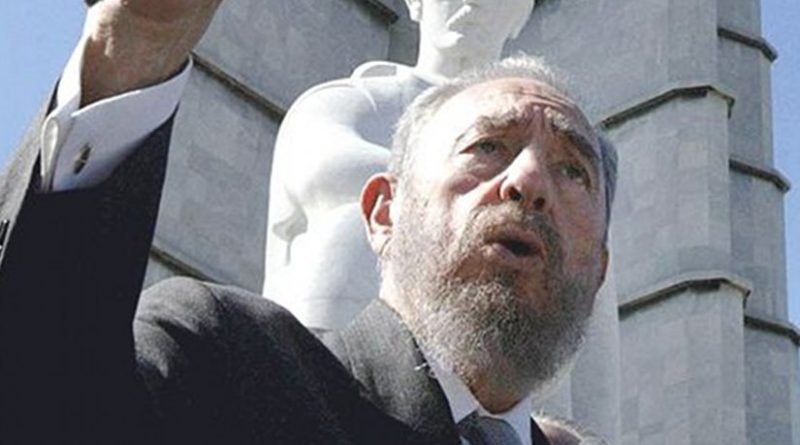 The German philosopher Friedrich Hegel once described the “world-historical men, the heroes of epoch” who “must therefore be recognized as its clear-sighted ones.”

There are no shortages of people particularly in the West who regard Fidel Castro as a villain and a dictator, but to millions upon millions of others in Cuba, Latin America, Africa, Asia, and elsewhere around the world, Fidel was a revolutionary leader and symbol of resistance against American imperialism, who successfully led a popular revolution against a US-backed corrupt dictator and then catapulted his small island nation on the stage of world history by inspiring other revolutions and liberation struggles around the world, chiefly by standing up to Uncle Sam and its regime of coercive sanctions and outright interventions for several decades.

Indeed, this is how various third world revolutionary leaders have appraised Fidel, chief among them the late Nelson Mandela who was visited by Fidel shortly after his long ordeal and warmly greeted Fidel as a close comrade who was a pillar of support for anti-apartheid. Fidel was also a friend of the Iranian people and wholeheartedly supported the Iranian revolution of 1979 and its spiritual leader, Ayatollah Khomeini, whom Fidel praised as a great revolutionary leader. In his recent meeting with Iran’s president Rouhani, Fidel once again acknowledged the natural affinity between the Cuban and Iranian revolution and was, in turn, praised by Rouhani for Cuba’s exemplary resistance to American coercion.

A close examination of the historical similarities of Cuba and Iran belongs elsewhere. Suffice to say here that both countries have led the Non-Aligned Movement and consider for themselves a crucial role in revising the global status quo that is inherently unjust and full of sharp contradictions stemming from a global capitalist division of labor, concentration of wealth in Western nations, the North-South divide, and a long history of imperialism and anti-imperialism, highlighted by the Cuban revolution of 1958, which occurred only five year after the CIA-led coup that overthrew a democratically-elected government in Iran and replaced it with a nepotistic monarchy that came to an inglorious end, much like the Cuban dictator Batista who fled the country and subsequently died in exile just like the deposed Shah of Iran.

There is no doubt that the Cuban revolution and the heroic resistance of Cuban people against American interventionism was a source of inspiration for the Iranian revolutionaries, who similarly threw away the chains of foreign domination and neo-colonialism and then saw themselves subjected to constant US-led pressures to “roll-back” the revolution. But, a clue to the magnificent will of people, both countries have survived and continue to sail on the stage of history, despite the setbacks and their post-revolutionary tumult.

It is therefore incumbent when assessing a narrative on a revolution such as Cuba to ask the pertinent question of who is the author and what are his or her loyalties. This is important because there are today so many biographies and books on Fidel, so many of which are little more than propaganda tools to undermine the still vibrant Cuban revolution, which has proved to be the harbinger of significant hemispheric changes reflected in the rise of Sandanistas in Nicaragua or Chavezism in Venezuela, each replicating the fundamental characteristic of the Cuban revolution, as a struggle of the humble for the humble, to paraphrase Fidel, who was first and foremost a (Jose Marti) nationalist-turned socialist.

Today, some 54 years after Fidel shifted from his self-proclaimed “democratic humanism” to outright socialism, the final verdict on this historical experimentation has yet to be written. Again, the bourgeois historians and the corporate-controlled Western media have long ago declared the death of Cuban revolution, typically exonerating the US from its direct faults in creating a state of emergency in Cuba for over a half century and squeezing its economy though a total embargo, which is still largely in effect despite the normalization of diplomatic relations, and without dwelling too long on US’s distortion of Cuban independence and sovereignty since the late nineteenth century, when the American ‘liberators’ of Cuba became its new masters, practically owning the whole country by the time of Fidel’s rise on the political scene in mid-1950s, when the young Fidel’s hopes for a legislative role were rudely dashed by a US-backed coup that received almost no condemnation in American press at the time.

Objective historians, on the other hand, have posed valid questions that are worth pondering: would Cuba under Fidel turn to the Soviets for assistance if the US had not refused to buy Cuba’s sugar? Would Fidel turn more authoritarian in 1962 had it not been because of the White House-engineered Bay of Pigs invasion and the associated attempts to assassinate him?

Of course, none of these precludes a frank discussion of Fidel’s shortcomings and even errors. For sure, the young revolutionary cadre that assumed power in January 1958 was so inexperienced at state-making that the economy inevitably suffered and it would take years before the extremes of planned economy would reveal themselves, thus paving the way to today’s mixed, part public, part private, economy. Fidel himself admitted to the mistake of public trial of officials of ancien regime, which led to the summary execution of hundreds and possibly thousands without the due process of law. That was the beginning of a rising Stalinist streak, that quashed the promises of free elections “in 18 months,” and so many decades later that promise is still awaiting its fulfillment. This, together with the abuses of human rights, have marred the nature and character of the Cuban revolution, and for sure Fidel bears a lion share of the responsibility. But, then again, Fidel rightly saw human rights in a wider net, inclusive of economic rights and political right to national sovereignty, which in post-revolutionary Cuba tended to trump the individual rights, above all the right to free expression.

Fidel might have taken a precious lesson from Mandela, whose initiative of a post-Apartheid ‘truth commission’ avoided the kind of bloodshed we have seen in other, e.g., French, Russian, Cuban, and Iranian, revolutions. Still, the evolution of Cuba toward a more tolerant system is encouraging and a reminder that we must analyze Fidel and his revolution on a longitudinal basis and right now we are simply too close to the unfolding pages of Cuban post-revolution to issue a familiar verdict.

One thing is for certain, however, and that is Fidel stands tall next to Mandela, Cabral, Lumuba, and other third world revolutionaries as a world-historical visionary leader, who is revered by the masses of the third world in their struggle for autonomy and justice.