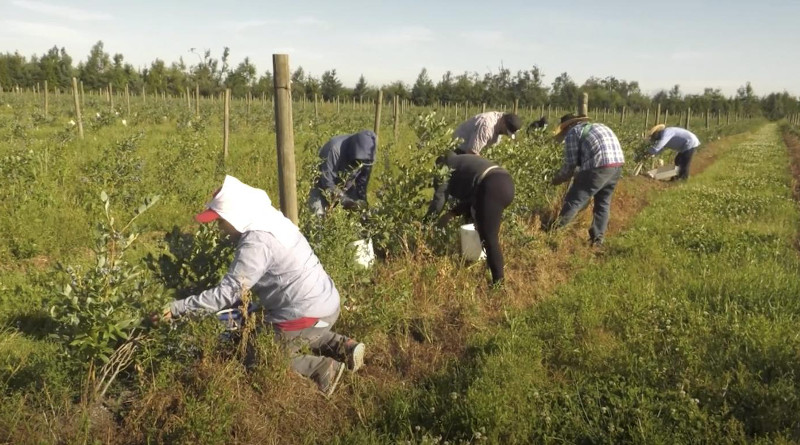 Workers pick blueberries in Skagit County, Washington state, in 2018. This image is from a video demonstrating a partnership between UW researchers and Washington farmworkers. CREDIT: UW Department of Environmental & Occupational Health Sciences

The global pandemic has put a focus on essential workers, those we rely on for basic services. Workers who pick crops, from strawberries to apples to nuts, already face harsh conditions harvesting in fields during summer harvest months. Those conditions will worsen significantly over the coming decades.

A new study from the University of Washington and Stanford University, published online in Environmental Research Letters, looks at temperature increases in counties across the United States where crops are grown. It also looks at different strategies the industry could adopt to protect workers’ health.

“Studies of climate change and agriculture have traditionally focused on crop yield projections, especially staple crops like corn and wheat,” said lead author Michelle Tigchelaar, a postdoctoral researcher at Stanford University who did the work while at the UW. “This study asks what global warming means for the health of agricultural workers picking fruits and vegetables.”

“I was surprised by the scale of the change — seeing a doubling of unsafe days by mid-century, then a tripling by 2100. And we think that’s a low estimate,” Tigchelaar said.

The study also shows that heat waves, prolonged stretches of three or more of the hottest days for each county, will occur five times as often, on average, under 2 degrees Celsius of warming.

Roughly 1 million people officially are employed in the U.S. picking agricultural crops. The authors used the U.S. Bureau of Labor Statistics job codes to determine their locations. The 20 counties that employ the most pickers all are in California, Washington, Oregon and Florida. The actual number of agricultural workers in the U.S. is estimated at more than 2 million.

This population already is vulnerable to health risks. Agricultural workers tend to have lower incomes and less health coverage, a majority say they are not fluent in English, and many do not have legal work status in the U.S., meaning they are less likely to seek medical care. Farmworkers already report more kidney ailments and other conditions related to heat stress.

Tigchelaar began the study after a 2017 death in Washington state, when a blueberry picker died during a hot and smoky period. That prompted Tigchelaar, then a postdoctoral researcher at the UW, to think about how agricultural workers are particularly at risk from climate change.

“The people who are the most vulnerable are asked to take the highest risk so that we, as consumers, can eat a healthy, nutritious diet,” Tigchelaar said.

“This is the first study that I’m aware of that has attempted to quantify the effect of various adaptations, at the workplace level, to mitigate the risk of increased heat exposure with global warming for agricultural workers,” said co-author Dr. June Spector, a UW associate professor of environmental and occupational health sciences.

Results show that the most effective way to reduce heat stress would be to develop lighter protective clothing that would still shield workers from pesticides or other hazards. And using any three of the four adaptation strategies in combination would be enough to offset the temperature increases.

Many workplaces are already protecting workers from heat, said Spector, who conducts research in the UW Pacific Northwest Agricultural Safety and Health Center. This new study helps employers and workers foresee future conditions and think about how to prepare.

The authors caution that the study is not an excuse to stop reducing greenhouse gas emissions. Lower emissions can’t avoid the temperature increases projected by 2050, but the longer-term adaptation measures considered would have a big impact on farm productivity and profitability.

“The climate science community has long been pointing to the global south, the developing countries, as places that will be disproportionately affected by climate change,” said co-author David Battisti, a UW professor of atmospheric sciences. “This shows that you don’t have to go to the global south to find people who will get hurt with even modest amounts of global warming — you just have to look in our own backyard.”