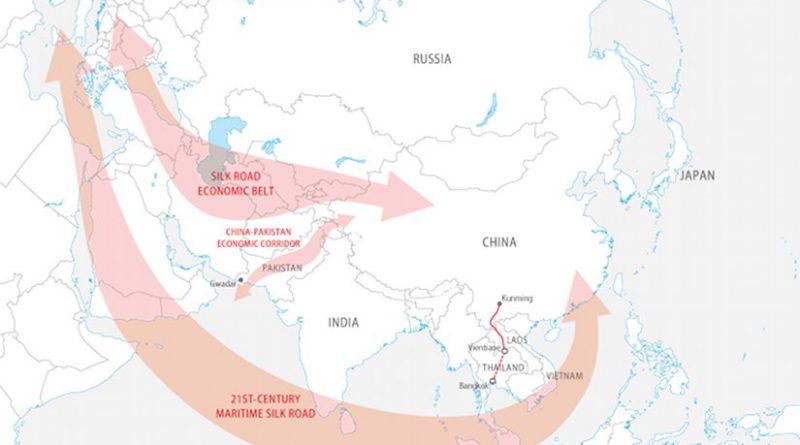 During visits to Central and Southeast Asia in 2013, Chinese President Xi Jinping unveiled Beijing’s aspiration to create what it called the Silk Road Economic Belt and the 21st-Century Maritime Silk Road.  Both would entail the construction of new infrastructure to better connect the present-day countries along what was once the ancient Silk Road between China and Europe.  The former would do so over land with roads, railways, and airports; the latter across the ocean with seaports.  China’s two-part aspiration is now commonly referred to as its “One Belt, One Road” initiative.

At the time of Xi’s unveiling, China was near the zenith of its economic power.  Not even the 2008 global financial crisis seemed able to derail China’s economic ascent.  Some saw the “One Belt, One Road” initiative as a way for China to extend not only its economic, but also its political reach across Eurasia.  India had begun to worry about what it considered to be China’s “string of pearls,” a series of Chinese-built seaports across the Indian Ocean.  Others viewed the initiative even more broadly as an ambitious effort to reorient global commerce towards China.

But since then the air of invincibility surrounding China’s economy has dissipated.  China’s engines of growth—export manufacturing and infrastructure construction—have sputtered, as the debt that fueled them and the overcapacity that they created have ballooned.  Over the last year and half, Chinese leaders have been forced to repeatedly “fine tune” their economy to keep it growing.  They boosted China’s government spending, devalued its currency, cut its interest rates six times, lowered its bank reserve ratio seven times, and even directly intervened in its stock market.  Still, China’s economy continues to slow.

That slowdown has spurred Chinese leaders to seriously begin to shift their export and infrastructure-led economy to one that is driven by consumers.  How successful that transition will be is uncertain.  But one thing is clear, the “social stability” so prized by the Chinese Communist Party has begun to fray.  Popular unrest is on the rise.  The number of labor protests in China has soared from about 100 in 2010 to almost 2,500 in 2015.[1]

Thus, Beijing has every incentive to keep its giant manufacturing and infrastructure-construction state-owned enterprises (SOE) humming, as its economy makes the transition.  Seen in that light, China’s “One Belt, One Road” initiative looks less like a well-planned strategy and more like a scramble to keep the order books of its SOEs full.  New infrastructure contracts abroad would help do that; and once built that new infrastructure might help Chinese manufacturers export at a lower cost.

One can see China’s push to build more infrastructure projects from Indonesia to Pakistan.  In September, a Chinese-led consortium won approval from Indonesia to build a $5.5-billion high-speed railway in Jakarta.  But the consortium won only after it agreed that the Indonesian government would not have to guarantee the Chinese loans needed to finance the railway’s construction.  While that concession may have secured the approval, it also increased the potential financial losses that the consortium would have to bear if anything goes wrong.  With such large and complex construction projects, it is hard to ensure that will not happen.

Surely, China expected a different outcome after its construction companies built a port at Gwadar for Pakistan in 2007.  Despite a total investment of over $1 billion, the port has remained virtually idle.  Now China is doubling down on the Gwadar project.  It has promised $45.7 billion in fresh financing to build the China-Pakistan Economic Corridor, a series of energy, road, railway, and pipeline projects that will more closely tie Gwadar to China.

Of course, China can still benefit from such infrastructure projects even if they turn out to be unprofitable.  The new road, rail, and pipeline routes through Pakistan will enable China to import strategic resources, like oil, natural gas, and minerals, from the Middle East without being reliant on sea routes through the Indian Ocean.  The projects could also deepen China’s “all-weather” friendship with Pakistan by creating new constituencies within Pakistan that benefit from the economic activity that the trade routes to China could foster.

Other land-based links to China could do the same. The Kunming-to-Bangkok railway is another example.  The portion of it in China is already finished; the portion in Laos broke ground in December; and the final portion in Thailand is slated to begin construction in May 2016.  Given the massive scale of Chinese trade, even if a small portion of it is redirected over the railway, it could reshape the economic interests of a small country like Laos.  Indeed, China may hope to use the railway to pry Laos away from its traditional ally, Vietnam, and gain another friend in ASEAN.  On the other hand, China would not benefit to the same degree from Chinese-built seaports and airports that are not directly connected to it.  While they may boost trade in the host country, the course of that trade could be redirected elsewhere, if trade with China does not evolve as expected.

That is now a real possibility.  If the Chinese economy continues to soften, it means that China will need to import fewer raw materials and export fewer finished goods.  In the second half of 2015 China’s monthly imports fell 10 to 20 percent from a year earlier; and its exports slipped too.  Unless global demand revives or Chinese consumers pick up the slack, Beijing might well expect its “One Belt, One Road” initiative to yield more long-lasting political than economic benefits.